Most saves in ISL: Top 10 all time greatest goalkeepers in ISL

Goalkeepers are the most underrated players in football. Taking nothing away from the world’s top strikers, a goalkeeper is the most crucial member of the team, since his mistakes are the most decisive. A forward or midfielder can afford to hit a shot wide or play a wrong pass, but the goalkeeper’s one mistake can be fatal for the team. The Indian Super League (ISL) is in its 6th-year and has recently become India’s top football league. With a good mix of Indian and overseas players, the league has quite a few good goalkeepers. Here, we take a look at the top 10 goalkeepers with the most saves in the ISL… 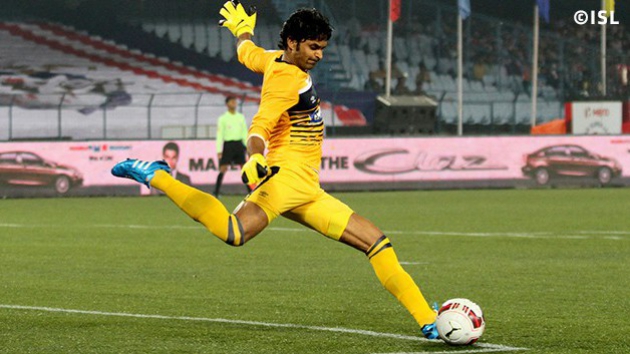 A TFA product, Subhashish rose up the ranks of Indian football winning the NFL and Durand Cup with Dempo and Mahindra United. He was drafted in by Atletico de Kolkata and won the inaugural edition with them. In subsequent seasons, he played for Kerala Blasters and Jamshedpur before joining Northeast United FC in ISL 2019. Subhashish, who is known for his reflexes and agility, has made a total of 95 saves in just 30 matches.

The youngest keeper of the lot, Kamaljit Singh has been a revelation in the ISL. Just 23 years old, he started his senior career in 2014 and came to Pune City FC in 2017. After 2 years in Pune, he came to Hyderabad in 2019 and is the first choice ahead of Laxmikant Kattimani. Although he has conceded 14 goals this season, he has pulled out an astonishing 95 saves in just 24 matches with the last season being his best.

This Indian national started out playing for JCT Mills and Salgaocar and earned huge praise. He started his ISL career for Chennaiyin FC on loan from Salgaocar and has been instrumental in their success with 112 saves in 48 matches for the team.

This lad from Bengal is a well-known name in Indian and Calcutta football circles. Starting his football career with Mohun Bagan, he won the I-League with Churchill Brothers and also won the I-League best keeper award in 2008-09 season. He played for Bengaluru on loan in 2017 shifting to Mumbai City FC and finally home franchise, ATK in 2018 and has been with them. He has made 114 saves in 43 matches in ISL and also played 5 international matches for India.

Apoula Edima Edel Bete is a Cameroonian-born Armenian goalkeeper who entered the ISL with Atletico de Kolkata in 2014. He had an excellent season playing 9 matches and leading the team to victory with several saves. He is also the leading foreign goalkeeper in terms of saves made with 122 saves in just 35 games. In subsequent seasons, he played for Chennaiyin FC and FC Pune City for a year each. He has played for Paris Saint-Germain for three seasons and has 6 caps for Armenia.

The guardian of the Indian national team, Gurpreet has shown some excellent form lately between the posts. The Chandigarh-based goalie started his career with East Bengal before movig to Stabaek Football in Norway in 2014. He signed for Bengaluru in 2017 and has made 46 appearances pulling out 124 saves. Interestingly, Gurpreet has played 38 matches for India and is the only Indian to play in UEFA Europa League.

Laxmikant Kattimani is a common name in Goan football circles. The goalie started his career in 2008 in Vasco and has played all his senior career in Goa. He represented FC Goa for 5 years and has been an absolute rock with the gloves for Goa with 136 saves in just 39 matches. He changed allegiance to Hyderabad FC in ISL 2019.

Rehenesh TP burst onto the scene with his performances for Northeast United in the 2014 ISL and was a regular in the side till 2018. Originating from Calicut, he now plays for the home franchise, Kerala Blasters. Known for his reflexes and decision-making, he has racked up 156 saves in 54 matches and is among the top goalkeepers in the country. He has played for Shillong Lajong and East Bengal in the I-League with 4 international caps.

The second in this list of players with most saves is Amrinder Singh. This Indian goalie has reached to some extraordinary levels quite quickly. He has amassed a total of 193 saves in 61 matches in ISL and continues to go strong for Mumbai City FC. He started out as a loanee for Atletico De Kolkata from Pune in 2015 and played every match except one and took them to the semis. The following year, he joined Bengaluru F.C and has impressed since then. He also won the best goalkeeper for I-League with Pune and has earned 5 caps for India.

Rightly called as the “Spiderman of India”, Subrata Pal leads the list of goalkeepers and definitely is among the all-time best players in ISL. He has represented ISL clubs, Mumbai City F.C and Jamshedpur F.C and pulled off a staggering 224 saves in 77 matches for them. He has also represented multiple clubs in the I-League with Mohun Bagan, East Bengal, Dempo being the notable ones and has 67 international caps.