Pro Kabaddi League, or PKL,  has come a long way since its inaugural season. Back in 2014, the most expensive player at the auction was Indian superstar Rakesh Kumar, bought by Patna Pirates for ₹12.4 lakh. And if you compare that to the latest PKL auction, the most expensive player bagged almost 12 times the amount Rakesh did. This change tells the story of PKL’s rapid success and popularity amongst the fans. And of course, players are the biggest winners in all this, who have started bagging seven and eight-digit salaries for one season. So who were the biggest gainers in PKL auction 2019? Here are the seven most expensive players of Pro Kabaddi League 2019: 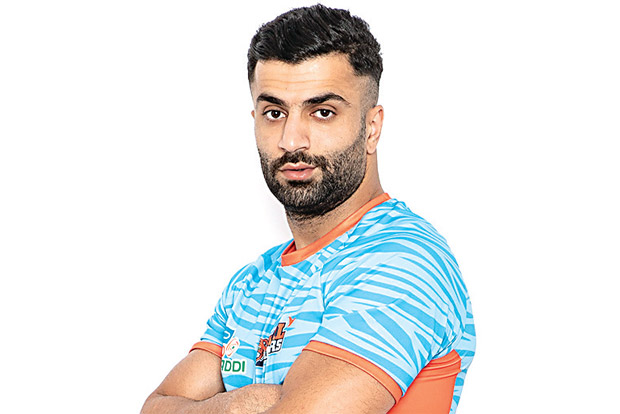 The Iranian all-rounder became the most expensive foreign player of PKL 7 as Bengal Warriors bought him for a whopping ₹77.75 lakh. After proving himself at the 2018 Asian Games, Nabi was always going to be a popular pick for the franchise at the auction. But the Warriors surprised everyone by paying such a massive amount for the Iranian in his very first season.

The all-rounder was on fire in his debut game against Up Yoddha, scoring 10 ten raid points from 11 raids. And in his second game, the Iranian showed his defensive skills as well, winning two tackle points. With 12 points in two games already, Nabi looks all set to live up to the price tag in PKL 7.

Mahender Singh was Bengaluru Bull’s best defender in their title-winning season last year. The defender won 63 tackle points in 2018, and the Bulls did not even hesitate to spend ₹80 lakh for the player this time around. Mahender also became the most expensive defender for season seven of PKL.

The defender has won more than 50 tackle points on both seasons he has played so far. And with 4 tackle points each in Bengaluru Bull’s first three games this season, 12 in total, Mahender is set for yet another solid season in defence.

Sandeep Narwal, ‘The Beast’ and one of the best all-rounders in PKL history was signed by U Mumba for ₹89 lakh at 2019 auction. The 26-year-old, whose base price was set at ₹30 lakh also became the most expensive all-rounder of the seventh season.

Monu Goyat became the most expensive player in the Pro Kabaddi League history last season as Haryana Steelers bought the raider for mind-boggling ₹1.51 crores. But such were the expectations from him that the Steelers were unhappy with 160 raid-points in 20 games from the raider.

Monu was released before the 2019 auction and UP Yoddha bought him for ₹93 lakh. The raider has won 417 in his PKL career so far with his best season coming in 2017, with 191 raid points for champions Patna Pirates. Monu has won 7 raid points in 2 games so far this season. However, he needs support from his UP teammates, who were thrashed by some margin in both games.

‘The Raid Machine’, Rahul Chaudhary is the most decorated player in PKL history with 895 total points. He is also the second most successful raider with 841 raid points in 102 games just behind Pardeep Narwal.

After spending six seasons with Telugu Titans without getting his hands on the coveted PKL trophy, Rahul joined Tamil Thalaivas for season 7. And the Raid Machine has now joined veterans Ajay Thakur, Manjeet Chillar and Shabeer Bappu in search of the first trophy.

After a record-breaking auction in 2018, where six players crossed the ₹1 crore mark, only two players managed to do so in 2019. And the only player to manage it in both seasons was Nitin Tomar.

Pune signed him in 2018 where he won 102 points in just 11 games. Puneri Paltan initially released before the 2019 auction but was eventually repurchased for ₹1.2 crores with the help of an FBM Card.

Nitin has scored 394 points in four seasons playing just 53 games. But the raider is yet to play a game this season due to an injury.

With 221 points in his debut season for U Mumba, Siddharth Desai became an instant sensation. The raider was the Emerging Player where he finished the season with 10 super raids and 12 Super 10s.

Siddharth was always going to be franchise’s favourite in the 2019 auction. But not many believed that he would become the second most expensive player in PKL’s history at ₹1.45 crores.

But Siddharth has failed to live up to his price tag’s expectations so far. Despite winning 25 points in four games, the raider has been unable to lead the team to a win. Telugu Titans have lost all four games in their home phase, and Siddharth needs to step up his game to get the Titans back on track.

Chinmay Pagar
I might be a Mechanical Engineer on the paper, but I was a Sports enthusiast since childhood, screaming at the TV watching cricket at the age of 4. Not much excites me other than sports unless it's free pizza. I can watch literally anything remotely related to sports; Cricket, Football, Tennis, F1, Hockey, Athletics, Chess, you name it! And I love to write too, so at the time I'm not watching sports, I'm writing about it. Or eating pizzas, of course.
Previous articleMithali Raj net worth, endorsements, salary (Updated 2019)
Next article7 Best Foreign Players in PKL to watch out for [2019]