Saikhom Mirabai Chanu made the nation proud by lifting a whopping 202 kg to win her first medal at the Tokyo Olympics 2020. Two decades ago former Olympic bronze medallist Karnam Malleswari had bagged the gold for India in 1994 and 1995.

Hailing from the Northeast, Mirabai Chanu is from the new breed of sportspersons from the tiny state of Manipur. The state by the way has a population of less than three million.

Young protégée Chanu has long been billed as Indian weightlifting’s next superstar. Inspired by her idol Kunjarani Devi, she started engaging in the sport and lifting weights soon after the Athens Olympics. When she started out, bamboo canes were used for the first six months, before she moved onto an iron bar.

At the age of 11, displaying some impressive performance she had already become the under-15 national champion. At 17, the young Manipuri was the junior champion and subsequently earned her the national team call-up.

In 2016, she broke Kunjarani’s snatch national record, set in 2004, and equaled the total lift record of 190 kg to win the Asian Championship. The amazing performance, which was just 2 kg shy of the Olympic silver-medal mark, put her in the national limelight.

Reflecting on her story so far Chanu says, “Those performances weren’t satisfying for me. Like Kunjarani Devi, I too wanted to perform in the Olympics.”  Her coach, Vijay Sharma, said she began lifting 190-plus totals routinely during training that made her a strong contender for the medal at the Rio Olympics. However, she froze on the biggest stage of all.

Chanu was one of the two contestants who could not finish the event. She failed to lift the barbell in all three clean-and-jerk attempts. 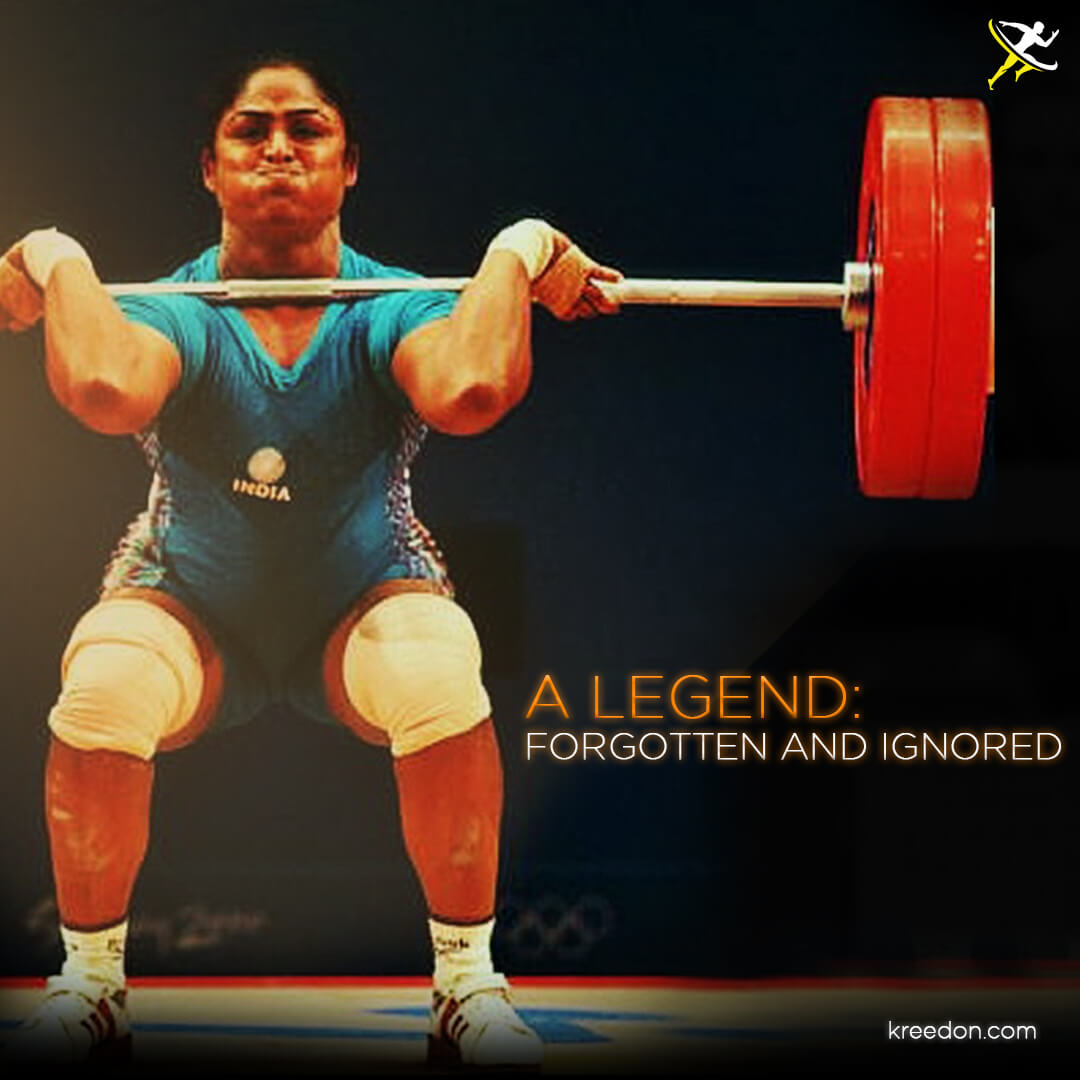 Mirabai Chanu became the world champion in the 48kg category. This amazing feat made her only the second Indian woman to win a gold medal at the world stage after Karnam Malleswari, who achieved this feat twice, in 1994 in Turkey and in China in 1995.

A quick point to remember here is that women’s weightlifting was introduced at the 2000 Sydney Olympics and Malleswari became the first Indian woman to win an Olympic medal when she snatched the bronze.

Malleswari winning a medal in the 54 kg category was no news back home. The expectations of her winning the gold were high as she entered the event as a two-time world champion. In her illustrious career, the Andhra Pradesh woman gave India 29 international medals, 11 of which are gold.

Observing Chanu’s triumphant smile, the commentators at the Anaheim Convention Center in California, USA were as ecstatic as the Indian camp.

They didn’t hold back their words and said “She would go home and get a Rockstar status” and the other quipped in, “She is good, she earned it.” Yes, she should.

During the final event, the 1.5-meter pocket dynamo from Manipur ensured India at least a silver medal after her final lift of 109 in clean and jerk. The other girl in contention for the gold was Thailand’s Sukcharoen Thunya, the reigning Asian and junior world champion.

Mirabai Chanu after the lift did her customary Namaste and left the arena pleased with the fact that she will give India a podium finish. An admirer of 7-time world silver medallist Kunjarani Devi, Chanu knew if Sukcharoen successfully lifted 109 kg, she would have settle for the silver. She lifted a kilo less than the Thai in the snatch category.

Sukcharoen, in the final lift, failed to go past 109kg. This was the moment when Chanu realized that the gold was her. She had failed to even lift her entry weight of 104kg in clean and jerk to end her 48kg category event as DNF (Did Not Finish).

Weightlifting in India has had a roller coaster ride surrounded by doping controversies. From the time of honest athletes in the late 1990s to the disgraced in the new millennium, weightlifting has seen it all.

Indian weightlifting received a big setback when three women lifters were punished for doping at international events in one year.

India’s record in doping is shocking as one-fourth of some 800 athletes banned by the National Anti-Doping Agency (NADA) have been weightlifters. Due to this unfortunate incident, the national federation was banned by the international body for three years between 2004 and 2009. With stringent rules now imposed by the national federation, things have started to get better in the past 7-8 years. Indian athletes now are a frequent figure on podiums of world events.

Mirabai’s excellent showing surely will lift the spirits of the iron men and women of the country. If someone points to the absence of the tainted biggies from Russia, Ukraine, Kazakhstan, Azerbaijan, China, Turkey to devalue the performances at Anaheim, it is no fault of the clean and hard-working athletes.

The International Federation decided to ban any country that had three positive tests after retesting of the samples by the International Olympic Committee in the 2008 and 2012 Olympic Games.

Saikhom Mirabai Chanu will be hailed as a great woman athlete of our country. Her name will be taken in the same breath along with tennis star Sania Mirza, badminton queens Saina Nehwal and PV Sindhu, wrestler Sakshi Malik and gymnast Dipa Karmakar.

Mirabai Chanu has certainly infused a new life into the sport. Her performance will inspire many more from Manipur and North-East to dominate the sporting scene of the country.

Mirabai became emotional as she went up to the podium to collect the gold medal. It’s been a good year for the Manipuri girl. In September, she qualified for the Commonwealth Games 2018. Her qualification was guaranteed after she won gold at the Commonwealth Senior Weightlifting Championship held at Gold Coast, Australia.

READ | PT Usha: The Story of Sprint Queen of India

Mirabai Chanu overcame personal hardships and tackled professional disappointment in her young career. She lifted approximately four times her body weight, to claim her hard-earned gold at the World Championships!

READ | Yogeshwar Dutt Biography: The Wrestler with a Heart of Gold

Padma Shri Awardee @mirabai_chanu is training hard every day to give her best at #TokyoOlympics. She is determined to make her country proud.#JeetengeOlympics @sonysportsindia @kirenrijiju pic.twitter.com/EAjBPfrW74

From lifting firewood to winning the gold medals, @mirabai_chanu has proved herself time and again. She's confident of winning the Gold in #TokyoOlympics. Join us in wishing her good luck!

Weightlifter Mirabai Chanu said that she was “completely broken” after the 2016 Rio Olympics and that talking to a psychologist helped her. @mirabai_chanu https://t.co/x2uKhxztsc

Weightlifter @mirabai_chanu, one of India's biggest medal contenders at the #TokyoOlympics, speaks to @MendraDorjey about the years she's spent dedicated to her sport and the sacrifices she's made.

Vardan Pandhare
Vardhan is an author who loves creativity. He enjoys experimenting in various fields. After completing his graduation, he was sure about one thing! His love for sports. He is now living his dream of being creative with words in the field of sports. He has since then always brought the latest news and updates for all the sports fans.
Previous article
Is Hardik Pandya the next Kapil Dev of Indian Cricket team?
Next article
Athlete Performance Analysis Program by Auptimo Technologies