All of a sudden, the whole complexion of the tournament has changed. Kolkata Knight Riders have risen up to the 4th position beating Mumbai Indians comfortable by 7 wickets at the Sheikh Zayed Stadium. It’s a different team than we saw in the first leg of IPL 2021 with the inclusion of Sunil Narine and Venkatesh Iyer into the playing XI and majorly, the playing style of the team has transformed radically. We have seen a glimpse of it against RCB in their last match but this victory is just as good. Meanwhile, MI lost the track of things. Dropping to 6th place in the standings, the defending champions have to clutch on quickly to stay in the league. 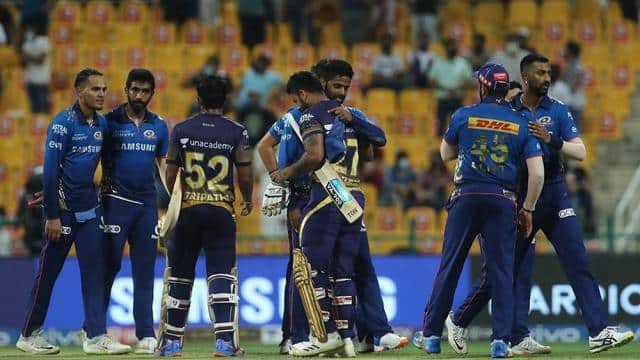 KKR wanted to replicate the match against RCB as they chose once again to chase after winning the toss. Captain Rohit Sharma returned for Mumbai Indians and paired up with Quinton de Kock to kick start the batting. While the South African was facing troubles to build his innings, skipper Rohit began his innings with a back-foot punch through the covers scoring a boundary. With heads straight, Rohit frequently found boundaries until de Kock took over the charge. The opening partnership went on till 78 and that was certainly the only period when Mumbai Indians was on top of the game. After Rohit’s dismissal, his opening partner got to a half-century while the in-form SK Yadav and Ishan Kishan couldn’t make any serious impact. Kieron Pollard’s 21 from 15 took them to a decent total of 155 but with the start they got, it should’ve finished somewhere near 180. Lockie Ferguson, Prasidh Krishna and Sunil Narine were the wicket-takers for KKR.

The Gill – Iyer combination was destructive in the last game against RCB and everyone was wondering whether they could do it against such a star-studded bowling line-up. And oh boy! They did it again. In the first two overs, the young guns scored 30 runs hitting Adam Milne and Trent Boult all over the ground. Bumrah entered the stage unusually in the third over of the match and though he conceded two boundaries, got the stumps of Shubman Gill in the last ball. Just when they started to relax, Rahul Tripathi came in and joined the party. Tripathi and Iyer carried the game beyond MI’s reach. The new boy in the town, Venkatesh Iyer hit his first IPL fifty and Tripathi stayed with an unbeaten 74 from 42 deliveries. Except for Jasprit Bumrah, every other Mumbai Indians bowler failed to impress. It’s two consecutive wins for KKR and two consecutive defeats for MI. The shift in momentum is clearer in the points table than anywhere.

It is a common thing in IPL that players who seemed in great touch in the international circuit fail to match it in IPL. Well, the MI openers proved it wrong. Quinton de Kock and Rohit Sharma were having one of their best stints in international cricket and they did repeat it yesterday. An opening stand of 78 definitely deserved a better team total.

Ishan, Hardik, Krunal and Pollard. Mumbai Indians have one of the strongest middle orders on paper. Even without the injured Hardik, the players down there have the potential to change the game lightning quick. What we have witnessed in the first leg of IPL 2021 was the ineffectiveness of this middle order and sadly it still continues in the second leg. Somewhere between the match, MI forgets to work as a unit.

Lockie Ferguson has got the best bouncers

The right-arm pacer from New Zealand is dangerously quick. But what is even threatening are his bouncers that just shoots from the short length leaving the batsmen with less time to play a shot. He bagged the wickets of Ishan Kishan and Krunal Pandya with the same deadly bouncers.

Venkatesh Iyer is something special

He is tall, strong and aggressive. In just his first two matches, the 26-year-old Venkatesh Iyer has already been KKR’s special one. He is brave enough to take on any bowler right from the start of his innings. It’s unclear whether KKR wants their players to play aggressively or Iyer just transfers his confidence to his fellow teammates.

Another impressive performance from Rahul Tripathi

Since the 2017 IPL season, Rahul Tripathi was noted as one of the young prospects for India. In the next two years, Tripathi wasn’t given enough chances to pave his way. He made his return in fine fashion for KKR and has already played some crucial innings for the team. The 74 vs Mumbai is another accolade for the aspiring cricketer.

Ambati Rayudu Cricket Profile – The story of ‘patience’ and ‘class’