The Indian Premier League has produced a lot of great young cricketers for India. Whether it is Jasprit Bumrah or Hardik Pandya, these players have turned out to be very useful assets for the Indian Cricket Team. Today we are going to know more about one such young & talented Indian cricketer – Mayank Markande

Mayank Markande is a young leg Spinner who is currently a part of the Rajasthan Royals squad in IPL. Markande holds an impressive collection of googly & other variations in his bowling bag, good enough to trick the best the game has seen. 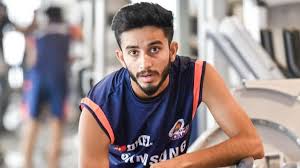 Since he was as young as eight years old, Mayank Markande developed an interest in cricket and joined the NICS Cricket Academy in 2006. He was also part of his School’s Cricket Team as well. He studied in Yadavindra Public School in Patiala.

His early coaches have said that Mayank originally wanted to be a fast pace bowler, but it was on their suggestion that he turned to be a spinner on account of his lean body and lack of pace.

Ajay Ratra, Assam’s Cricket Coach has said that Mayank had received a lot of advice and learned a lot from former Indian spinner Harbhajan Singh.

Mayank Markande made his debut in domestic cricket during the Syed Mushtaq Ali Trophy of 2017-18 in the T20 format. He later made his List-A debut in 2017-18 Vijay Hazare Trophy playing for Punjab.

He also then made his Ranji Debut in the 2018-19 season for Punjab which was also his first-class debut. He went on to become the leading wicket-taker in the tournament with 29 wickets in six matches.

Markande made his debut for Mumbai Indians in IPL in the 2018 edition of the game. He made his debut against Chennai Super Kings in the season opener where he took three wickets.

He was selected for IPL by Mumbai Indians after an impressive show of skill in the pre-auction trials. He was bought by Mumbai for around 20 lakhs.

The biggest highlight of the Match for Mayank Markande has to be the Googly which got him the wicket of the legendary Indian Captain and CSK skipper Mahendra Singh Dhoni. Dhoni was out on LBW unable to read Markande’s delivery.

Mayank Markande backed up his debut performance by another four wickets he took against the Sunrisers Hyderabad. He held the purple cap in his debut time for quite a significant period but had to finally relent it.

In the 2019 season, Mayank Markande barely received any chance due to the rise of fellow leg spinner Rahul Chahar and a mix of injuries and he did not have a large role to play in Mumbai Indians winning the IPL title.

After the season, Mumbai swapped him for Sherfane Rutherford with Delhi Capitals which released him before the auction and he was consequently bought by Rajasthan Royals for the 2020 edition of the IPL.

Mayank has not played a lot of International Cricket due to being fairly young and immense competition. He was selected for the 2018 ACC Emerging Teams Asia Cup. He made his T20I debut in 2019 against Australia. With wrist spinners being an important part of the game, it seems likely that in the future Mayank Markande will get a chance to play for the Indian Cricket Team as well.

While all of us stay indoors, let's relive Mayank Markande’s stunning grab during the @paytm #RanjiTrophy 2019-20. 👌👌

It fills me with immense pride to wear this jersey on this day with these talented bunch of guys.
Happy Independence Day Everyone 🇮🇳 pic.twitter.com/TJSpH3K4ta

Every great dream begins with a dreamer 🏏 pic.twitter.com/VtVrA0ZAT4