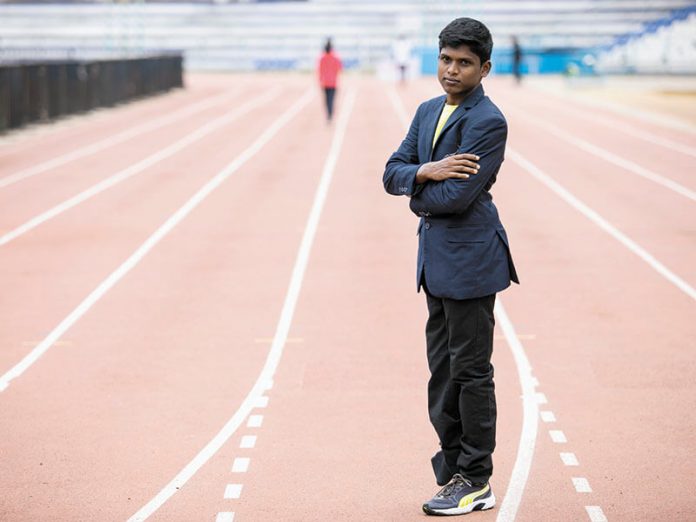 Mariyappan Thangavelu: Just try reading the life stories of some Paralympic athletes and you will realize how privileged we are. Life hasn’t been kind to them, but they persevered. They never gave up on their dreams, even when it was so much easier to do so. Those athletes have to fight against not just their disabilities, but also lack of infrastructural and societal support. They have to shatter societal taboos and challenges we cannot even imagine!

Today we are exploring the life of one such young champion. It is said that heroes defy all odds. Indeed, his life is indeed an inspiration for all and his fighting spirit will truly amaze you. What marvels me the most is specifically the immense humility and positivity that this young man has shown at a very young age. I am talking about India’s first high jump gold medalist – Mariyappan Thangavelu. 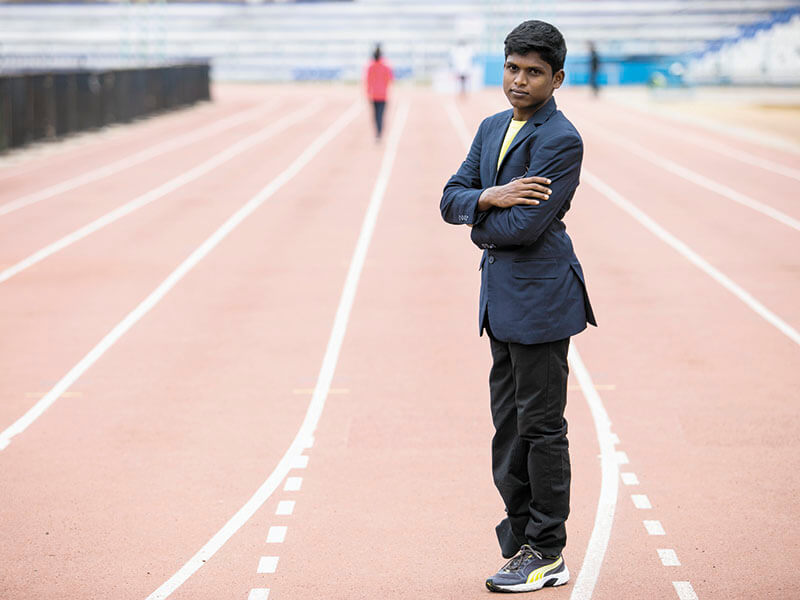 Life has been far from easy for Mariyappan. He was born in a poor family in Periavadagampatti village in Tamil Nadu. His father abandoned the family when Mariyappan was a small kid. His mother, Saroj, singlehandedly raised him and his three siblings. Mariyappan has two younger brothers – Kumar and Gopi and one elder sister – Sudha. Saroj used to work as a laborer to make ends meet. Her daily wages used to be around 100 rupees. With age and because of all the manual work, she switched to selling vegetables.

Life took an unexpected twist when Mariyappan was just five years old. He was walking to his school when he was run over by a drunken bus driver. Saroj took a loan of three lakh rupees for Mariyappan’s treatment. Unfortunately, he was left with stunted growth and permanent disability. The family was paying off the loan for years after that.

“I was told the driver was inebriated…It doesn’t matter. My right leg is now stunted — it is still a five-year-old’s leg; it has never grown or healed,” he told The Hindu.

In spite of all this, Mariyappan continued studying hard. He completed his secondary school and later pursued a Bachelor of Business Administration from AVS College of Arts and Science. He wants to study further as well and is planning to opt for an MBA course.

As a school student, Mariyappan wanted to become a volleyball player. However, it wasn’t easy for him to play because of his disability. It was his high school physical education teacher, who encouraged him to take up the high jump. Later, he was spotted by coach Satyanarayana at the 2013 National Para-Athletics Championship. Satyanarayana knew that this boy is special and took him to Bengaluru for further training. Mariyappan finally got an opportunity to develop skills and learn techniques at the Sports Academy of India center for differently-abled in Bengaluru.

“He was a disciplined and confident kid. His struggle made him hungry for success and he strived hard to achieve what he has,” coach Satyanarayana told Forbes India in an interview.

From here on, there was no stopping the young athlete. Within just a year and a half of training, he became World No. 1 in 2015. He made a mark at the national level first, then the international level, and went on to script history in Rio. He used his prize money to buy a paddy field for his mother. The family has a much more consistent source of income now. Mariyappan has requested the Tamil Nadu government to give him a job.

He wants monetary security for his family and is ready to work hard for it. He even has plans for his school. Mariyappan wants to improve the sports infrastructure in his village.

READ | 10 Amazing Indian Para Athletes who made the Nation proud!

At the 2016 Summer Paralympics Games held in Rio de Janeiro, Mariyappan made history. In the men’s high jump T-42 category, he won the gold with a stellar jump of 1.89 meters. Another Indian, Varun Bhati registered a mark of 1.86m to win the bronze medal. USA’s Sam Grewe took away the silver medal home. It was indeed a proud moment to see two Indians standing on the podium. With this achievement, Mariyappan brought home India’s first gold medal in the high jump. After 14 years, India won a Paralympics gold medal!

He had performed really well at the IPL Grand Prix in Tunisia. In fact, his hump of 1.78 meters there, enabled him to qualify for the Rio Games.

Mariyappan got a well-deserved hero’s welcome back home. As a matter of fact, many dignitaries from the Tamil Nadu sports association came to congratulate him. The monetary help coming from the government and other organizations or individuals changed Mariyappan’s life forever. He finally got recognition at an international stage.

“We were watching live, the event. At precisely 2.52am, my brother leaped to a gold medal. And for a minute it seemed as if it was a dream, but no it was for real. My brother was standing on the podium with the medal…we always were confident he would win a medal. And his coach was sure that he would get a gold. We hope that Mariyappan’s achievement is recognized by the government and he gets a job that will help the family as well,” his younger brother Kumar told the Hindustan Times.

India is elated! Congratulations to Mariyappan Thangavelu on winning a gold & Varun Singh Bhati for the bronze at the #Paralympics. #Rio2016

India is surely proud of her son who conquered multiple challenges to emerge victoriously. Life is never perfect, but how we use our imperfections to fulfill our dreams is important. It is important to realize, giving up is always the easiest option. Getting up every time you fail with the same amount of determination is what distinguishes champions from us ordinary mortals.

I am very glad that a movie is being made about the life of Mariyappan Thangavelu. His extraordinary journey should be known to the maximum number of people possible. In fact, it will give hope and motivation to millions. Mariyappan has shown that anyone and everyone can soar high into the sky with wings made of hard work and willpower!

Mariyappan is part of India’s 302 member contingent. We would like to wish him and all other participants all the very best! We know that they will surely make us proud. It is extremely and certainly heartening to see more media coverage and increasing participation in Paralympic games. Athletes like Mariyappan are heralding a new era in Indian sports.

Mamta Thatte
A passionate foodie, a versatile writer, and now a sports enthusiast, Mamta is always open to exploring new avenues. She has a vast experience in Web Content Writing, Editing, and Social Media Management. A self-confessed coffee and dark chocolate addict, she believes in following her heart and giving her 100% into everything she does.
Previous articleSuyash Jadhav Wins Historical Gold; Becomes India’s First Triple Medalist
Next articleWeightlifter Jeremy Lalrinnunga Bags India’s First Gold Medal in Youth Olympics History

Mariyappan Thangavelu: The Indian Flagbearer at the Tokyo Paralympics

Mariyappan Thangavelu: The Indian Flagbearer at the Tokyo Paralympics