Another Chinese duo bagged the bronze in this category, while Indian players Abhidnya Patil and Anmol Jain. 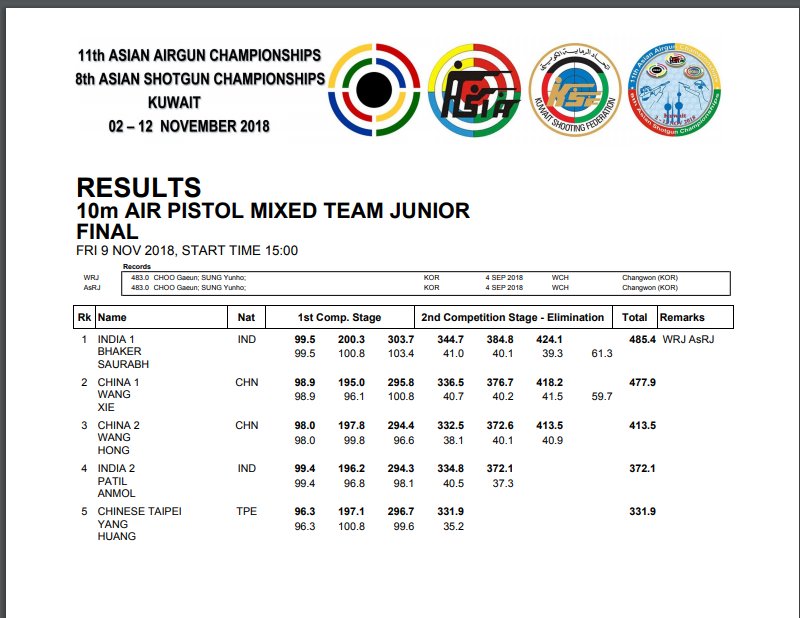 In the qualifying stage of the championships, Manu and Saurabh were among the top 5 teams, who scored 762 out of 800 as a combined score. Though the due had scored in the same as the Chinese toppers Wang and Hong, unfortunately, lost due to the lesser inner 10s. In qualifying, Anmol and Abhidnya stood third with a combined score of 760.

This has been a great event for the Indian shooters as India’s junior shooting team ended with a total tally of 11 medals, which includes four gold in India’s kitty too.

Having won the gold medals in individual and team 10m air pistol events, this was Saurabh’s consecutive third gold in last 2 days. On the other hand, Manu had bagged a silver medal for the team.

First, Saurabh along with Arjun Singh Cheema and Anmol Jain had logged in a successful, gold-medal win by scoring a combined total of 1731 points. He later scored 239.8 in the eight-man individual final to clinch a gold medal again.

Saurabh, who had earlier bagged gold at the Asian Games in August, had also earned golden moments at his name at World Shooting Championship and Youth Olympic Games last month.

India’s Arjun Singh Cheema managed to clinch a silver in the individual category.

Manu misses a medal in the individual category

Shooting maestro Manu Bhaker was unable to clinch any medal in her individual round and settled for a fourth in the 10m air pistol final with a score of 196.4. Though Manu played neck to neck with her pair Saurabh and was able to clinch a gold for the country in the mixed team’s event.

The Indian women’s Junior team which included Manu, Abhidnya and Neha won the team silver in the 10m Air Pistol with a combined tally of 1694 points. They were one down from team China who tallied 1704, who took away the gold.

Bhawna Kothari
Lover of cultures, varied colors, and underdogs, Bhawna is a by-heart and professional playwright. Hailing from a journalism & communication background, she incorporates a careful study at both flips of the coin which is essentially required to be analytical in thoughts and words. Actively abreast of the current affairs around the globe, she likes knowing and bringing into light the unexplored. Problem solving via the power of content is what inspires her and hence KreedOn, a platform created for the betterment of sports ecosystem in India, is now her happy workplace!
Previous articleShiva Singh’s ‘360-Degree’ Ball Grabs Headlines; Takes Twitter by Storm
Next articleWomen’s World T20: Captain Harmanpreet’s Ton Steers India To a Rousing Start in the Tournament