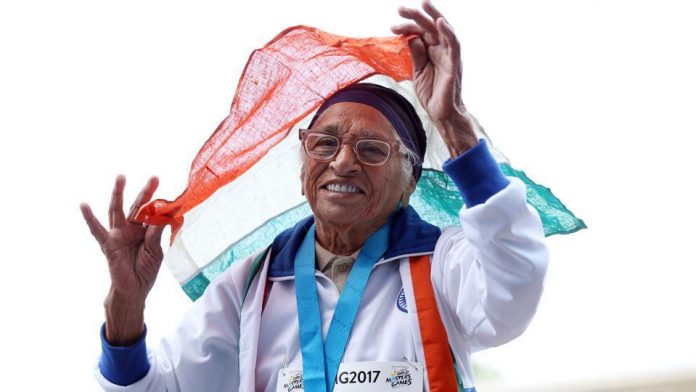 Mann Kaur, the oldest Indian female athlete, has once again brought laurels to the nation at the World Masters Athletics Championship in Malaga, Spain. The 102-year old from Patiala has won her second successive gold in the 200m race in the 100-104 age category.

Kaur had earlier won a gold medal in the 100m category at the Masters Games in Auckland, New Zealand in 2017.

Who is Mann Kaur?

Mann Kaur is an Indian female athlete, aged 102-years. She is the oldest Indian female athlete and has many world records and medals to her name from various tournaments all over the world. Kaur participates in the World Masters athletics, which feature athletes above the age of 35 years.

Before taking up sports, Kaur used to live a pretty much regular life. Her life revolved around her children and grandchildren. However, when her eldest son, Gurdev Singh, urged his mother to take pt sports, Kaur did not hesitate to say yes. Gurdev, a retired civil servant from the Punjab Forest Department, himself is an athlete and has participated in the World Masters Games. He has won over 80 medals in the span of over 25 years. These games are also known as the Olympics for senior citizens.

Before Kaur entered the world of sports, her medical showed that she was healthy leading to the then 93-year on getting on track the very moment. In the same year, Kaur won her first medals, a silver in long jump and bronze in 100m at the Nationals.

When she won the gold medal at the 2017 World Masters Games in Auckland, Kaur bettered her own record by a big seven seconds. In the 100-plus category, she had finished the race in 1 minute 14 seconds.

How does Mann Kaur stay motivated and healthy?

The main encouragement and motivation come from her son, Gurdev. Along with him, Kaur practices in Chandigarh very alternate day and follows a regular gym routine on other days.

On a normal outdoor training day, she runs five sprints of 50m, and also of 100m and 200m. She has a strict diet plan which includes a glass of kefir (a fermented yogurt drink) to start her day in the morning. She eats rotis of sprouted wheat, consumes fruit juices, four teaspoons of wheatgrass juice, nuts and seeds every day.

A proud moment for India! Mann Kaur, India’s oldest female athlete, wins the 200m Gold Medal in the age group of 100 – 104 at the World Masters Athletics Championships. Watch this video to know more about her age-defying achievements. #OMGIndia pic.twitter.com/CMrNnqWRiv

Kaur says that any young athlete should avoid eating junk food, and feels that good food and regular exercise is the key to healthy living.

Mann Kaur has a huge fan following due to her inspirational run in the world of athletics. And her biggest fan is none other than Milind Soman, who himself is an unofficial brand ambassador of health and fitness in India.

LOOK AT THAT SMILE !!! Man Kaur from India wins the 200m GOLD in the World Masters Athletics #WMAMalaga2018. Age group 100- 104 years!!
What a privilege for every person in the world to see her in action and to share her joy ??#PinkathonFOREVER pic.twitter.com/hDvWc3EVVf

Let us hope that Mann Kaur continues to bring more medals and inspires youngsters in the country and all over the world.

KreedOn Network
We are a team of sports writers who research about sports in India day in day out. Please reach out to us in case of any specific requirement of digital services on [email protected] .
Previous articleIndia Cricket – Takeaways for India from 2018 England series
Next articleM. Prakash – Taking India to new heights in World Dwarf Games

PT Usha: The Story of Sprint Queen of India

Legends of the Game January 4, 2018
Go to mobile version