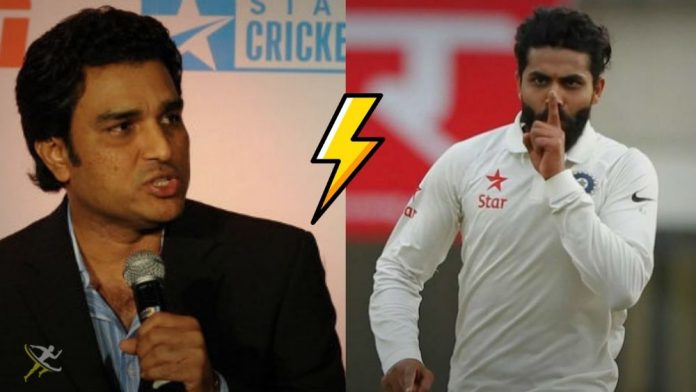 It seems that there is a lot of turbulence in the Indian cricket team at the ICC World Cup 2019 – Injuries, replacements, retirements and now a bitter exchange of words between two fellow countrymen in England. And the two persons in question – Ravindra Jadeja and Sanjay Manjrekar. The former gave a scathing reply to the former India cricketer and commentator on Wednesday after Manjrekar had labelled Jadeja a ‘bits-and-pieces’ player.

“I am not a big fan of bits and pieces players which Jadeja is at this point of his career in 50-over cricket. In Test matches, he is a pure bowler. But in 50-over cricket, I would rather have a batsman and a spinner,” he had said.

In reply, Ravindra Jadeja asked for more respect citing he had played the twice number of matches than Manjrekar. He also asked to stop the commentator to stop his ‘verbal diarrhea’.

This season, Ravindra Jadeja has yet to start a single game in the 2019 World Cup, although he has taken to the field as a substitute fielder. And as expected, Sanjay Manjrekar was trolled intensely by his fans.

This is not the first time that Manjrekar has gotten into the wrong books of the Indian fans. He was heavily criticised over his comments on MS Dhoni’s strike rate and poor strike rotation.

“Here’s something interesting about Dhoni -. 41 off 87 balls v spin this WC. But in the warm up games 69 off 56 balls v spin. That tells me it’s mental too. He does not put his wicket on the line as much in the big games,” Manjrekar had tweeted.

Here is what the fans had to say about the whole incident:

Sanjay manjrekar : Not a big fan of bits and pieces player like jadeja #jadeja : pic.twitter.com/hTgfBHzWAc

Whenever I listen to Sanjay Manjrekar's commentary, me to myself:

Players usually don’t react on social media to their criticism. But this Sanjay Manjrekar drama surely has deeper rooted issues in the Indian team for Jadeja to tweet that and then domestic cricketers adding to it

SANJAY MANJREKAR honestly speaking, you are the most irritating commentator i have ever seen. I change my channel whenever you starts your virbal Diarrhea. #SackManjrekar #jadeja #CWC19

Sir jadeja you are a true champion and great allrounder in every format✌ https://t.co/yQmOmix215

Of all the cricketers around, Sanjay Manjrekar with a mere thousand odd ODI runs at an average of 33.23 should be the last one to pass jibes or sweeping remarks. Its surprising as to how he has been able to pass off his gibberish as commentary for such a long time!

Changes I would like to see in the Indian team:

Rishabh Pant to replace MS Dhoni at no5

MS Dhoni to replace Ravi Shastri as the Indian Coach

Facts may not change the real fact that the Great Sanjay Manjrekar is a perpetual asshole with verbal diarrhea https://t.co/y0xITMU2WW

Sanjay Manjrekar doesn't have any work to do. So the old theory of controversy creates cash is being used by him. He just wants to stay in the lime light

If only Sanjay Manjrekar batted the way he wanted Dhoni , Rahul or any other.. he cud have won us World Cup.. but alas he didn’t.. so STFU @sanjaymanjrekar ..#IndiaVsBangladesh

Sanjay manjrekar had no right to call him such words, A cricketer can perform only when he is allowed to play, and advised and supported properly. If all eleven players performed well always then the team would have been invincible.

KreedOn Network
We are a team of sports writers who research about sports in India day in day out. Please reach out to us in case of any specific requirement of digital services on contact@kreedon.com .
Previous articleThe “3D Glasses” that cost Ambati Rayudu his Career
Next articleHima Das Shines as Indians Dominate Poznan Grand Prix