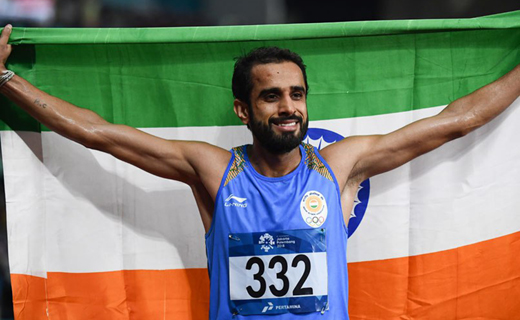 Life gives us two choices. Either we can run away from our problems or we can run towards our dreams. Sometimes, there are too many obstacles in our way. Eventually we lose sight of the destination and focus only on avoiding the problems. However, every individual gets an excellent opportunity to give his or her very best and cross the finish line. Some lucky ones might get more than one, but for most of us, it is a do or die situation. Manjit Singh

He came from a humble family with limited means and over that, lost his job within two years. He did not have any sponsor or godfather to back him. However, he made the most of what he had. Moreover, when it really mattered, he made history! We are talking about the golden sprinter, Manjit Singh.

“In Guwahati he thought he would return around 1:48, but he finished second behind Jinson in 1:46.24. That was just the boost his career needed. He had promised to go home after only Asian Games gold. Now he will go home a happy man. I had told him to take advantage of the straight stretch in the last 100m”, the ectastic coach told the Times of India.

“Can you imagine what it is like for a father to not see his newborn son? I’ve wanted so much to meet him and hold him in my hands. I want to meet my son. I want to show him my gold and let him know what his father achieved,” Manjit told espn.in.

“Since Abhir was born, my husband has not come home, instead, training in Ooty and Bhutan. Even though he has been training without a job, he makes sure that he keeps sending Abhir gifts. But this gold medal is the biggest gift for him. When he returns, he would put the gold medal around his neck”, she told The Indian Express.

The Journey towards Gold

You have covered a long, very long distance #ManjitSingh to reach that GOLD medal at #AsianGames2018 8-years ago from 1:50.88 in semifinals of #Delhi CWG2010 to amazing 1:46.15 in #Jakarta; here are your moments of #Glory with #IndianFlag; Congrats Champ, be #proudindian! pic.twitter.com/P2klYZSpD6

“Yes, 800m is my pet event and definitely I would have loved to win gold in it. So, in a way I am disappointed but I am happy that two Indians won gold and silver instead of other countries winning them,” Jinson told PTI.

Super Sensational Sprint?‍♂️?
Manjit Singh run like a Cheetah in last 50 meters and won the Gold Medal ? of 800 metres race with a timing of 1:46:15
at #AsianGames2018⁠ ⁠.
India’s Jinson Johnson won Silver Medal ?#ManjitSingh We are proud of your NEVER GIVE UP SPIRIT? pic.twitter.com/eezJeXE1LB

“Expected to win a gold. My preparations were good so expected to beat not just Jinson but others too. We are good friends, Jinson is a good athlete. It’s a gift for me and more importantly it’s for my country. I want to win gold in Olympics as well,” Manjit told India Today.

This confidence and positive spirit make Manjit Singh a true champion. He has given his all to sport. His sacrifices and hard work have brought him so much recognition and fame. The same qualities will take him ahead in life. We wish him all the very best for his future endevours.

Mamta Thatte
A passionate foodie, a versatile writer, and now a sports enthusiast, Mamta is always open to exploring new avenues. She has a vast experience in Web Content Writing, Editing, and Social Media Management. A self-confessed coffee and dark chocolate addict, she believes in following her heart and giving her 100% into everything she does.
Previous article
An emotional message from our mute champion – Goonga Pehalwan
Next article
Swapna Barman – Who brought India’s 1st heptathlon Gold in Asian Games