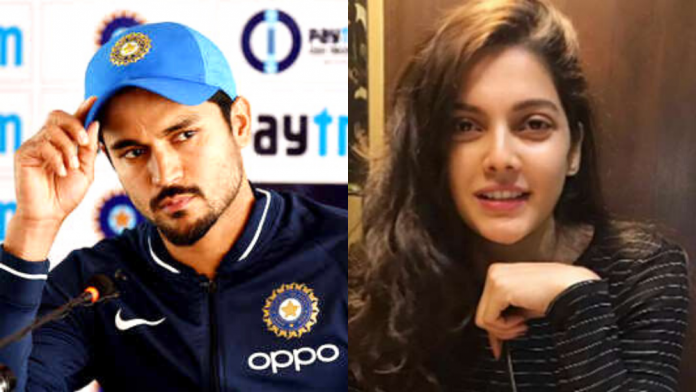 There are professionals who execute their jobs diligently, no matter what their personal commitments might be. And Karnataka captain Manish Pandey presented a resounding case of the same by leading his team to glory at the Syed Mushtaq Ali Trophy just hours before his marriage to Indian actress Ashrita Shetty.

Ashrita has predominantly featured in Tamil films. The 26-year-old rose to prominence after acting in Udhayam NH4 besides Siddharth before working in Indrajith and Oru Kanniyum Moonu Kalavanigalum among others.

“Looking forward to the India series, but before that there is another important series for me, I am getting married tomorrow,” Manish Pandey said after Karnataka’s win. The cricketer will feature in India’s limited-over series in December against West Indies.

“We [Karnataka] won it last year but this year the victory was a lot sweeter. The way the boys played the entire tournament has been unbelievable. Everyone has put in so much effort that I thought it was a very good game. It came neck to neck but we deserved it.”

However, his marriage ceremony on Monday didn’t stop Manish Pandey from leading Karnataka to successfully defending their Syed Mushtaq Ali Trophy crown. In fact, the cricketer led from the front by scoring 60 runs from 45 balls, helping Karnataka to post a competitive total of 180 in the epic finale.

Pandey scored 2 sixes along with four boundaries during his crucial stands with rising stars Rohan Kadam and Devdutt Padikkal. The Tamil Nadu team, in return, came close to chasing the total before falling a run short of Karnataka’s total.

Manish Pandey demonstrated his expertise in the fielding department by running a well-set Vijay Shankar out in the final over. And that wicket probably changed the face of the thrilling Syed Mushtaq Ali Trophy final in Surat.

The final was a star-studded Syed Mushtaq Ali Trophy affair with the likes of Ravichandran Ashwin, KL Rahul and Mayank Agarwal all featuring. Unsurprisingly, the epic finale received a cheerful reception with thousands of fans assembling at the Lalabhai Contractor Stadium, Surat on Sunday.

KreedOn Network
We are a team of sports writers who research about sports in India day in day out. Please reach out to us in case of any specific requirement of digital services on contact@kreedon.com .
Previous articleTop 13 Best cricket bats in India (2021 – 22 Edition)
Next articleNorthEast United FC vs Jamshedpur FC Dream11 Prediction For Today’s Match | NEUFC vs JFC Dream11 Prediction | Fantasy Football Tips

Manish Pandey Biography: A Brilliant Finisher Who Can Prove His Spot in World Cup 2019

Sunrisers Hyderabad: All You Need To Know About The IPL 2016 Winners

Manish Pandey Biography: A Brilliant Finisher Who Can Prove His Spot...

Sunrisers Hyderabad: All You Need To Know About The IPL 2016...