Manika Batra Table Tennis: The 2018 Commonwealth Games was one of India’s most successful Commonwealth Games campaigns ever. The Indian contingent came 3rd in the medals tally 66 medals overall- 26 golds, 20 silvers, and 20 bronzes. Among the stars who shined, paddler Manika Batra was way ahead of the Indian contingent in terms of winning medals and performing in both teams and individual events.

In terms of both the number of medals and the number of golds, this was India’s third most successful Commonwealth Games campaign. The Indian contingent excelled in a number of sports throughout the competition but one contingent that stood out was the table tennis team who won a total of 8 medals- three golds, 2 silvers, and 3 bronzes.

Out of the three gold medals in TT, only one came in the singles category and it was from Manika Batra. Let’s take a look at the rise of India’s latest table tennis sensation.

Three years later, Manika Batra represented India at the 2014 Commonwealth Games at Glasgow where she received a bye to the second round of the knockout stages.

In the quarter-finals, Batra was beaten by eventual bronze medallist Lin Ye of Singapore. However, she put up a tough fight and the match went to the final game.


Batra then competed at the Asian Games at Incheon where she received a bye to the second round. In the second round, Batra defeated Macau’s Ma Chao In before being shown the door by eventual quarter-finalist Kasumi Ishikawa.

In 2015, Manika Batra took part in the Commonwealth Table Tennis Championships where she won the silver in the Women’s Team event and the Doubles event as well and won bronze in the Women’s Singles event.

That year, she took part in her maiden World Championships at Suzhou, China. In the first round, the 20-year old Batra was up against Japan’s Miu Hirano who was seeded 24th. Batra won the first game but Hirano won four games in a row to win the match. Manika Batra also featured in the Mixed Doubles category alongside Sanil Shetty. However, they were beaten by the 7th seeded Chinese Taipei pair of Chen Chien-an and Chen Szu-yu in the first round.

Manika Batra in the big League

A couple of months later, Batra had one of the proudest moments of her career when she qualified for the Rio Olympics by winning the South Asia Group of the Asian Olympic qualifier. Manika Batra was seeded 52nd at the Olympics and was beaten in the first round by Poland’s  Katarzyna Grzybowska who was ranked 16 places above her. Batra was beaten by the score of 12-10, 6-11, 12-14, 11-8, 4-11, 12-14.

In 2017, Batra competed in her second World Championships at Dusseldorf. Batra was seeded 58th in the Women’s Singles tournament and registered an easy win over Poland’s Klaudia Kusinska in the first round. In the second round, she was up against South Korea’s Kim Kyung Ah who was seeded 27th. Batra began well by taking the first game 11-3 before her opponent breezed past her in the next four games to take the match.

In the Women’s Doubles tournament, Batra partnered with Mouma Das. The 13th seeded pair began by beating the Norwegian pair of Ilka Doval and Maja Gjelle in the first round. They then defeated the 18th seeded Russian pair of Yana Noskova and Mariia Taliakova in the next round after losing the first two games.

The pair created a major upset by defeating the last tournament’s bronze medallists- the Chinese-Dutch and Chinese-Polish pair of Li Jie and Li Qian. Batra and Das won all four games by a score of 11-0 to reach the quarter-finals. In the quarter-finals, the pair was comprehensively beaten by eventual champions Ning Ding and Liu Shiwen of China.

Then came the Commonwealth Games 2018. There were a lot of expectations from the 22-year old Batra who was seeded 4th in the Women’s Singles tournament. Batra began the tournament by defeating Australia’s Tracy Feng in the round of 16. Later she beat the 7th seeded Singaporean Zhou Yihan to reach the semi-finals.

In the Women’s Doubles Tournament, Batra once again partnered with Mouma Das and they reached the final. They were beaten by reigning champs Feng Tianwei and Yu Mengyu. Manika Batra led India to an unexpected gold medal by beating four-time reigning champions Singapore in the final.

Manika Batra has given Indian Table Tennis one of its finest hours. She herself has been in pretty good form lately. The Delhiite is currently ranked 58th in the world. After clinching the gold in the Commonwealth Games 2018, Batra will now be aiming for gold at the Asian Games.

Of course, that won’t be a walk in the park because players from China and Japan will also be competing. However, Batra has proven that she isn’t a towel dropper. She will certainly give the top players a run for their money.

Provided Manika Batra persists in working hard, then she might one day become World No.1. And maybe give India a Table Tennis medal at the 2020 Tokyo Olympics. 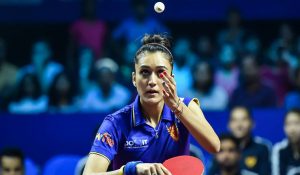 Neelabhra roy
Reading, Writing and indulging in sports activities have been Neel's passion since he was a child. He grew up playing various sports and knew that it was something he wanted to stay in touch with. After completing his graduation, he narrowed his focus on writing. In his leisure time, he likes to read books and chill with his dog.
Previous articleCWG 2018 – Indian Railways athletes won 40 percent of Gold Medals
Next articleIndian Boxers will dominate the Asian Games 2018: Vikas Krishan