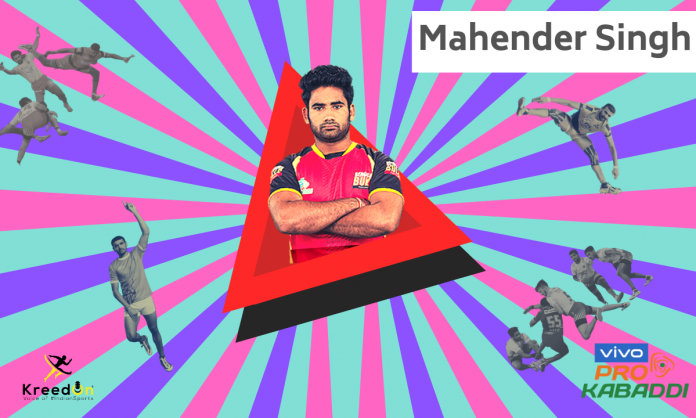 When an experienced coach like Randhir Singh gives the nickname ‘The Bulldozer’ to a 20-year old, that youngster has to have something special. After Bulldozers are so famous in India (who can forget ‘JCB ki Khudai’!). And that is exactly the case with Bengaluru Bulls’ most dependable and PKL 2019’s most expensive defender – Mahender Singh!

The left cover has become one of the best defenders of the league in just a couple of season. But who is this youngster that is causing waves in the country’s kabaddi circle? Let’s get to know Mahender Mahi Singh- the Bulldozer- Mahender Mahi Singh a little better:

Mahender was born on 10th December 1996 in Mandi, Himachal Pradesh. Unlike its neighbouring states, Himachal Pradesh is not the most famous state for Kabaddi. And it took young Mahender a little while to be introduced to Kabaddi due to that. He started playing Kabaddi at the age of 14.

But that was hardly an issue for Mahender as his skills and hard work helped him scale one ladder after another. He started playing for Services at the age of 19, just five years after stepping on the Kabaddi field.

Randhir Singh is known for his scouting skills. The veteran coach can identify a young and exciting prospect from the corner of an eye. And he worked his magic once again, bringing a 20-year old Mahender Singh to the Bengaluru Bulls squad for PKL 5.

It was a dream come true and a fanboy moment for the young defender. Fan Boy?

Yes, Mahender was inspired by Rohit Kumar in Kabaddi and tried to be an aggressive player like his hero. And the 20-year old got an opportunity to play under Rohit Kumar’s leadership at Bengaluru Bulls.

But once the season started, it was all business for the left cover. Never throughout the season, did it feel like it was Mahender’s debut season. He made the left cover place his own with constant brilliant performances.

In one of the games against UP Yoddha, Mahender won record-equalling 10 tackle points, including two super tackles – That’s as good and rare as an ODI Double Century! The Bulldozer gathered 57 tackle points throughout the season, 9th best in the league and best for Bengaluru Bulls. He was also the best left-cover defender of season 5. For his exceptional performance in the debut season, Mahender was named the Most Dependable Player of the Season.

After Mahender’s performances in PKL 5, Bengaluru Bulls could not afford to lose him the next season. And the Bulls repurchased him for ₹40 lakh in the auction. And it turned out to be a bargain price at the end.

Along with his performances at the Pro Kabaddi League, Mahender has also been an integral part of the Services team for the past couple of years. The defender has handled the left cover as Services have made it to the final of 65th and 66th Senior National Kabaddi Championship. (2017-18 and 2018-19)

Unfortunately, the Services have failed to win either of the finals, losing to Maharashtra in the 2017-18 season and Indian Railways the next year. But both Mahender and Services have somewhat made up for two final defeats with victory at the 2018 Federation Cup.


He is called the Bulldozer for a reason! It is Mahender’s sheer strength which helps him use the full force for dashing the raider out of the playing area. The defender has used this move several times and has come out on top against some of the strongest raiders in the league. Mahender is also quick enough to run to the other end of the court in order to perform the dash. With time, Mahender has also become one of the most dangerous defenders in the super tackle situations.

Mahender was once again bought back by the Bulls for season seven. But this time, the defender cost them twice the amount he did a year before – ₹80 lakh. Mahender also became the most expensive defender in the PKL 2019 auction. And if he continues to perform the way he does, it won’t be long before the Bulldozer becomes the most expensive defender in the PKL history. And the Team India call-up, that’s just around the corner!

Sweat it out as it adds a more life to ur life so are the friends who adds colors to ur life ??friends r the one who makes ur life more cheerful and joyful and adds more fun in it…HAPPY FRIENDSHIP DAY TO ALL??

Chinmay Pagar
I might be a Mechanical Engineer on the paper, but I was a Sports enthusiast since childhood, screaming at the TV watching cricket at the age of 4. Not much excites me other than sports unless it's free pizza. I can watch literally anything remotely related to sports; Cricket, Football, Tennis, F1, Hockey, Athletics, Chess, you name it! And I love to write too, so at the time I'm not watching sports, I'm writing about it. Or eating pizzas, of course.
Previous article“The Next Tendulkar!”: Who’s the 15-year-old that replaced Mithali Raj?
Next article20 Unbelievable benefits of sports we bet you didn’t know about