Maharashtra Kesari 2020: Kesari gets a new winner at last 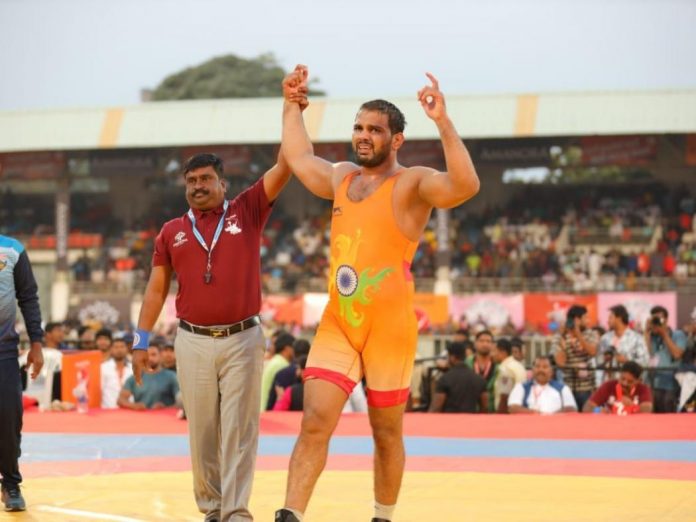 This is his first-ever title. Harshavardhan won in the final match 3-1. In fact, with Shailesh not having won a Kesari as well, the wrestling competition was sure to get a new winner for the 2020 edition.

The bout was an intense affair, with both the wrestlers hailing from North Maharashtra – Harshavardhan Sadgir is from Nashik whereas Shailesh Shelke hails from Latur.

In fact, both the divisions were eager to see which region would be victorious.

Wrestling has been running in this ‘Pailwaan’s’ blood. His grandfather and father both were well-known wrestlers.

Sadgir recently finished on the podium at the U23 National Wrestling Championships in Shirdi. He competed in the Greco-Roman category of the competition.

Harshavardhan also went on to clinch a medal at the national wrestling competition in Haryana. The wrestler had withdrawn from the Maharashtra Kesari’s last edition held in Jalna.

Like Harshawardhan, Shailesh Shelke has been training in the sport for several years now under the watchful eyes of Arjunvir Kakasaheb Pawar who is a resident of Pune.

Although originally from Latur, Shelke is a commander in the Indian Army at the Bombay Engineering Works Khadki, Pune.

Shelke has performed well at numerous national competitions under the stewardship of Subedar Stephan Shingade.

KreedOn Network
We are a team of sports writers who research about sports in India day in day out. Please reach out to us in case of any specific requirement of digital services on [email protected] .
Previous articleFCG vs NEUFC Dream 11 Prediction 2020 | FC Goa vs NorthEast United FC
Next articleGovt. launches Khelo India University Games, announces venue & dates