Kho Kho – Did you know the game has roots as old as Mahabharata?

Which is the traditional game of India which consists of traits such as cooperation, devotion, keenness, self-esteem, speed, and quick thinking? The answer is Kho Kho! This traditional Indian sport is more than a game. It is a personal development tool for the one who loves to take up the challenge. One can clearly say, the Kho Kho game is an inexpensive but highly enjoyable game. In this blog, you will get complete details of one of India’s oldest sports i.e Kho Kho, Kho Kho terminologies, Kho Kho skills, Kho Kho rules, and a lot more.

Kho Kho is one of the most popular traditional sports in the country. Some of the interesting facts about the game. The position of the players sitting is random; one will never find the same set of players sitting in the same order as when the game starts. The game requires immense stamina and speed. There are many famous Kho Kho players in India who have taken this game to another level. So are you planning to start a new game? Why wait? Today, we bring you the perfect guide to the Kho Kho game and all the kho kho information.

Tracing the roots of the Game

It is a tag game of our country. Its roots are as old as the epic Mahabharata, with plans and strategies likely derived from the epic itself. As the tale narrates, on the 13th day of the war, the Kaurava Guru Dronacharya planned the sole tactics ‘Chakravyuh’, a special military defensive plan broke by Abhimanyu. Unfortunately, he died as he had to fight alone against 7 warriors and he was badly injured. His style of fighting reflected the concept of ring play – a defensive tactic in the game. The game during age-old times involved ‘raths’ and chariots and was named Rathera. 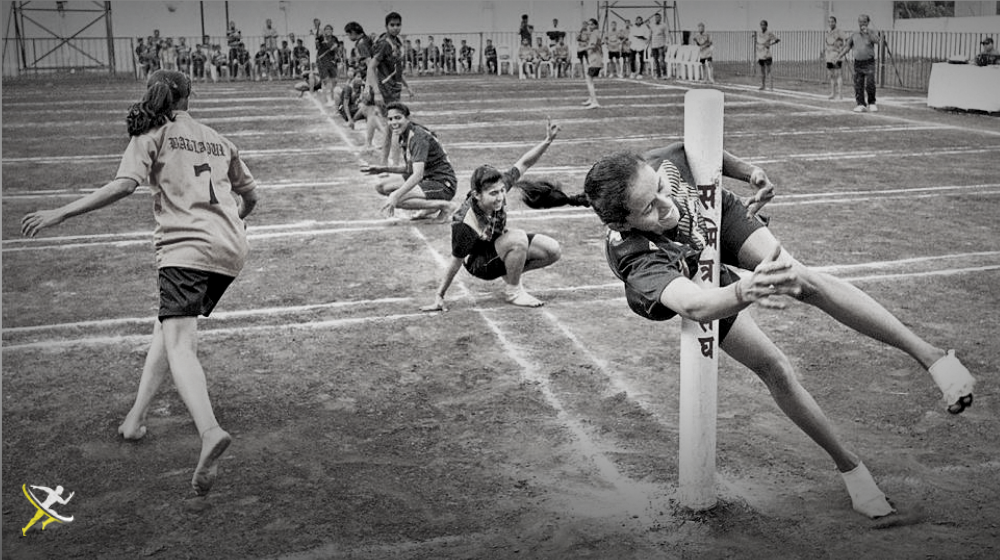 The Asian Kho Kho Federation first came into existence in 1987 at the time of the third SAF Games in India. The Kho Kho game gained international credit with the first Asian Championship which was held in Kolkata in 1996. The second championship was held in 2000 which added further shine to the game.

The modern-day game was invented in the Indian state of Maharashtra. The Deccan Gymkhana of Pune tried to lend a sense of reliability and recognition to the game by introducing certain rules and regulations to make it more formal. As a result, countries such as Pakistan, Bangladesh, Nepal, Sri Lanka, and the Maldives also participated in the game.

Talking about ground measurement, the playground for the game is 29 meters long and 16 meters wide. At each end of the longer side of the rectangle, it has two areas measuring 16 meters in length and 2.75 meters in width. A wooden pillar of 120 cm is located at the inner center of the line of this rectangle as shown in the figure above. The perimeter of the wooden pillar is between 30 to 40 cm. There is one straight line on either side of the pillar.

There are 8 pairs of parallel lines between these two wooden pillar posts. Each pair of the line is 30 cm away from each other and 2.30 meters away from the next pair. Coming to the equipment, the game requires two watches, whistles, measuring tape, boric powder, and stationery to write results.

READ | Badminton in India – Looking back at the History

Defenders must be quick enough. The defender should highly possess qualities such as flexibility and speed. Defenders must have a sufficient amount of reflex in the body because it allows them to change the direction to keep the game active in a real way.

Judgment of direction is one of the foremost skills one must hone while playing the game. This skill proves how fast and attentive you are. You must be very responsive to your teammates. This is required while getting up from the square. This game burns your calorie. One must run fast. It’s not just a relay, it includes a single chain running, zig-zag running, and straight running.

The referee must give a thorough look at the score sheets and playing area. The referee must coordinate with the umpires, in order to perform their duties well. If a player purposefully obstructs the conduct of the play or behaves in an ungentlemanly or mischievous manner, the referee can penalize the defaulting player. A referee can announce the warning by calling the chest number of the runner or chaser and showing a Yellow Card. It shall be recorded by Scorer-1 by marking the chest number in the warning column. The referee can announce the ‘forbidden’ from participation in future play in a similar way as a warning by displaying a Red Card.

The game’s primary sports body is known as the Kho-Kho Federation of India (KKFI). It has its branches in all the states and it has been conducting Mini, Junior, and Open National Championships for both genders, in many parts of India.

There are special awards given for the players who show prolific performance in the game. Janaki Award is given to a girl (Under 18) for her stellar show in the game. Veer Abhimanyu Award is similar to Janaki Award but it’s awarded to a boy who comes under the age of 18. The Karnataka government once recognized Ekalavya Award for the game. In 2008, Adarsha CP won this award.

Following are the major Kho Kho players in India:

These women Kho Kho players are the gem of India: 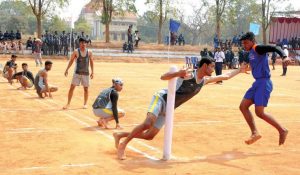 Akshay Badwe
The God taught me to love everybody but the most ones I learned to love are the athletes. Desire, determination and discipline takes me to a great deal of love towards sports. One can call me an avid sport maniac because I love to pen down some glorious content on sports. Being from journalism background with experience in media from couple of years I would like to keep this legacy going and now joining Kreedon gives me one more platform to explore the new world. I am always up to have a word on sports with a coffee.
Previous article
Vinesh, Divya Clinch Top Honours at Spain Grand Prix
Next article
10 unbelievable hit wickets in the World Cup cricket history