Khel Ratna: All you need to know about this year’s national sports award 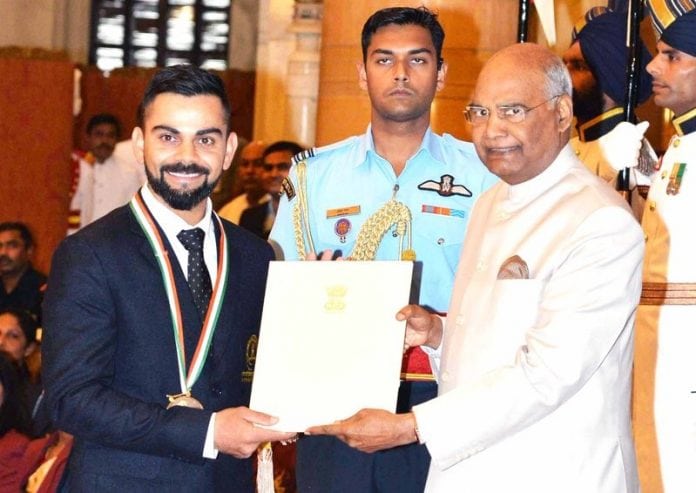 This year’s ceremony saw a shift from the customary routine, as two players were awarded instead of the usual one.

Although a sense of controversy surrounds the questionable choice of Virat Kohli over other contenders, that in no sense means he doesn’t deserve one. In fact, last year was path-breaking of sorts for the cricketer. In 2016, he amassed 2818 runs over all formats, bettering his 2016’s numbers.

His average in ODI was a staggering 76.84, matched by the average of 76.64 in tests. As a matter of fact, he scored a ridiculous 726 runs more than the second highest run-scorer (Joe Root with 2092 runs) in 2017. He fell just 15 runs short of equalling Ricky Ponting’s  2005 record of scoring the highest number of runs in a calendar year – ever.

But those are individual records, what about team India’s performance under his captaincy? Well, he was influential in leading India to the Champions Trophy finals. The team was successful in winning the second most number of matches in a calendar year (37). They won a record 14 bilateral series, with some memorable wins against England, Australia and the whitewash against Sri Lanka.

Saikhom Mirabai Chanu is a weightlifter from Nongpok Kakching, some 20 km from the capital city of Imphal. She plays in the 48 kg category of weightlifting.

Having failed to cleanly lift the weights in Rio Olympics, the 24-year-old has briskly risen to prominence on the weightlifting scene. She ended the year 2017 with the best achievement of her career – a gold at the World Weightlifting Championships held at Anaheim, US. She lifted a gross weight of 194 kgs, a competition record, in the 48 kg category of lifting.

In 2018, Chanu again made the country proud. She lifted 196 kgs at the Gold Coast Commonwealth Games, consequently winning gold.

Manipur Chief Minister felicitated Chanu for her incredible feats. He also presented her with a cash prize of ₹20 lakhs.

“When I go for my morning walks, or for work, people point at me and say, ‘There goes Mirabai’s mom’,”  says Tombi Chanu, Khel Ratna Mirabai Chanu’s mother.

Rajiv Gandhi Khel Ratna is the highest sporting honor of India. The Ministry of Youth Affairs and Sports, Government of India bestows exceptionally outstanding sports persons with the award annually. The award is named after India’s 6th prime minister, Rajiv Ratna Gandhi. He was in the office from 1984 to 1989.

The awards were incepted in the fiscal year 1991-92 to not only recognize talents excelling in the field of sports but to also inspire and encourage younger generation. The recipients receive a medallion, a certificate and a cash prize of ₹7.5 lakhs.

A specified points system and an11 membered expert committee are responsible for the allotment of Khel Ratna to athletes. According to the points system, Bajrang Punia had 80 points, whereas Virat Kohli, the ultimate winner, had ‘0’ points. Although Chanu had 44 points, at least six other athletes had more points than her.

So why the discrepancy in varying points and allotment of awards? Well, the points allotment system primarily takes into account Olympic sports and athlete’s performance in international events. Due to these very reasons, Kohli, technically, got zero points. Therefore, in cases of cricketers, the decision is not based on the points system. The 11 membered panel takes the call. Kohli was indeed selected in this fashion, with 8 of the 11 members nominating him.

Naturally, Punia, who won a gold at the 2018 Commonwealth games, did not concur with the committee’s views. “I’m hurt for not being recognized for my talent and performances, I don’t know what was the criteria of selection for this award,” Punia later told reporters.

Monish Gadiya
Monish Gadiya is the Head of Content at KreedOn. He is a thorough tech-enthusiast and believes that innovation is the answer to all the problems prevalent in the society. Monish graduated from University of Pune with a degree in Civil Engineering before pursuing a post-graduate diploma course in intellectual property rights. A die-hard football fan, he has represented his college at various football competitions.
Previous articleISL-Points Table Across the Editions and What it Means.
Next articleAdille Sumariwalla- Bringing the Change India Needs: Athlete Story

It’s a Silver for Bajrang Punia; 1st Indian with 2 World...