Khaleel Khursheed Ahmed is an Indian Left-Arm fast-medium Bowler, who made his international debut in the Indian Cricket Team in September 2018.

He has the ability to ball at a considerably high speed and can also swing the ball, angling it across the batsman. This enabled him to grasp the attention of the Indian U-19 Coach, Rahul Dravid.

He represented India in the 2016 U-19 World Cup. In the entire World cup, Khaleel only managed to take 3 wickets in 6 matches. But, he managed to impress Dravid with his skills who persuaded the Delhi Daredevils to buy him at his base price of 10 Lakhs.

This is a sneak peek at Khaleel Ahmed. Let us know more about the future star in the world of Indian Cricket. Ahmed was born in Tonk, Rajasthan to Khursheed Ahmed who worked as a compounder.

Much like many conventional Indian Families, Khaleel’s father wanted him to become a Doctor and was hesitant about the idea of his son becoming a cricketer. But Khaleel after much effort finally convinced him.

But before that, Khaleel joined a cricket academy at the age of twelve, without his parent’s knowledge. He made his debut for the Railways in T20, where he bowled four overs but didn’t get any wickets in 2017.  In his first-class debut in 2017, he picked two wickets and bowled with a great economy of 2.33, playing for Jammu & Kashmir.

Almost half a year later, in his List A debut in the Vijay Hazare Trophy, he took 3 wickets for 39 runs in 7 overs bowling with an economy of 5.57. 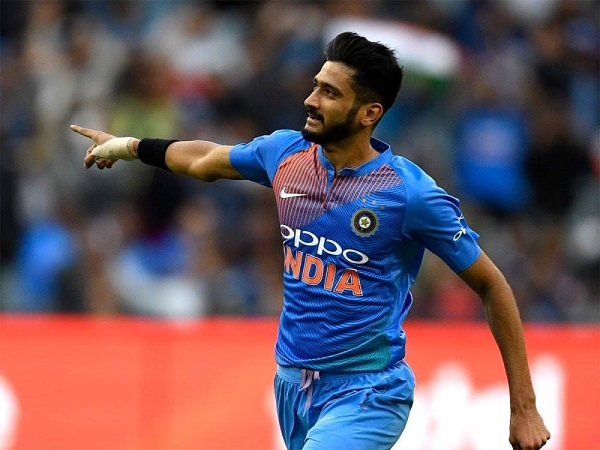 Khaleel made his ODI Debut against Hong Kong in the Asia Cup, where had taken 3 wickets with an economy of 4.80. Almost a month later, Khaleel made his T20 Debut, taking 1 wicket in his four overs and giving only 16 runs.

Khaleel was also part of the three pacers who went with Team India in the 2019 World Cup as net bowlers. The opportunity was a great learning experience for him. Khaleel Ahmed was bought in the 2017 IPL Edition where he was bought for 10 lakhs by Delhi Daredevils. However, He didn’t get to play any match in the IPL Edition.

Khaleel got to work with greats like Zaheer Khan and Rahul Dravid during his stay in Delhi which he believes helped him improve a lot. Khaleel worked a lot hard to develop his pace and bowling quality and had a great domestic season after that IPL.

After his remarkable performance in the 2017-18 Domestic Season, Khaleel was picked up at a hefty price of 3 Crores by Sunrisers Hyderabad, a team famous for having great bowlers.

That season too, unfortunately, Khaleel barely got to play except in an expensive outing against KKR at the Eden Gardens. However, here too Khaleel had the opportunity to interact with some of the best bowlers in the world.

Khaleel Ahmed has stated Zaheer Khan to be his Idol.

He won the Rising Star award, awarded by the Rajasthan Government.