As Kavita Chahal says “Seeing boxers fight made me curious to understand about why there were no women boxers. So, I asked my father who was an athlete from the boxing India himself, he said ‘that’s just a coincidence. But I was never satisfied with this answer. There was an urge inside me to make a name for myself in boxing. It was in 2004 that I decided to take up the sport seriously” says Kavita Chahal. 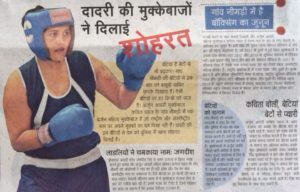 Born in a small village of Haryana, Nimri, Kavita Chahal is now a sub-inspector in Haryana police. In her childhood, she had the instinct of strength sport considering the way she played Kabaddi in school. This quality was not a secret to her father. He guided Kavita to start training for any individual sport and boxing sounded natural to her. She started traveling daily for practice from home to Bhiwani which was 22 kms away. Due to these long commutes, her practice was getting affected. She decided to rent a room in Bhiwani with other female athletes to accelerate her growth. Her father broke all the stereotypes in the village by giving his daughter all the freedom to chase her dreams. This freedom led her to win many championships for India.

Kavita Chahal is an officer of the law, a wife, a mother and a boxer. She has shown unprecedented dedication towards the sport. They say a right guru (coach) is the key for any success in life. Her case is no different.  Jagdish Singh, a Dronacharya award winner, trains Kavita. Immense hardwork and sacrifice favored Kavita when she won the world championship twice in 2010 and 2012 ( heavyweight category). She also bagged Asian championship medals 4 times (2008, 2010, 2011 and 2012). Kavita has also set a new record by winning the national championship 8 times and received Arjuna Award in 2013 for her exemplary performance.

Former world #2 made a smashing comeback into boxing after becoming a mother in 2016 by winning the national championship in Haridwar. Fulfilling her duties of an officer and training twice a day was not easy for this headstrong athlete. Juggling between her responsibilities as a mother, police officer and athlete would not have been possible without the support of her husband Sudhir. Taking pride in Kavita’s victories and achievements, Sudhir gives a new perspective to the meaning of life partner and care of the household responsibilities too. 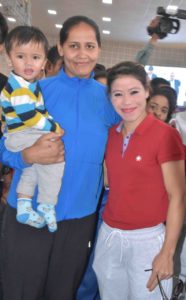 Kavita has great potential to corner glory in her second innings. She eyes the Asian and Commonwealth Games in 2018. The inspirational athlete has taken part in elite events for the past 10 years. She would surely fulfill her dream of becoming an olympian. We wish her all the luck for future and thank you for serving our country. Like her, there are many other inspirational boxers in India for ex – Manoj Kumar. And, athletes from other sports. We will bring more stories like her. Stay tuned.

KreedOn Network
We are a team of sports writers who research about sports in India day in day out. Please reach out to us in case of any specific requirement of digital services on [email protected] .
Previous article
‘Ballu’ aka Balwant Singh Sagwal: The Ferocious Captain Of Indian Volleyball Team
Next article
Dhyan Chand – The Father of Indian sports

Malaysia Masters 2019: Saina Nehwal into the Quarterfinals; To Face Okuhara...