Joshna Chinappa, who won Silver medal in the squash event with doubles partner Dipika Pallikal at the recently concluded XXI Gold Coast Games in Australia was felicitated by the Government of India, at the Rashtrapati Bhavan, along with other CWG medallists who brought laurels to the country.

Joshna Chinappa on her CWG experience 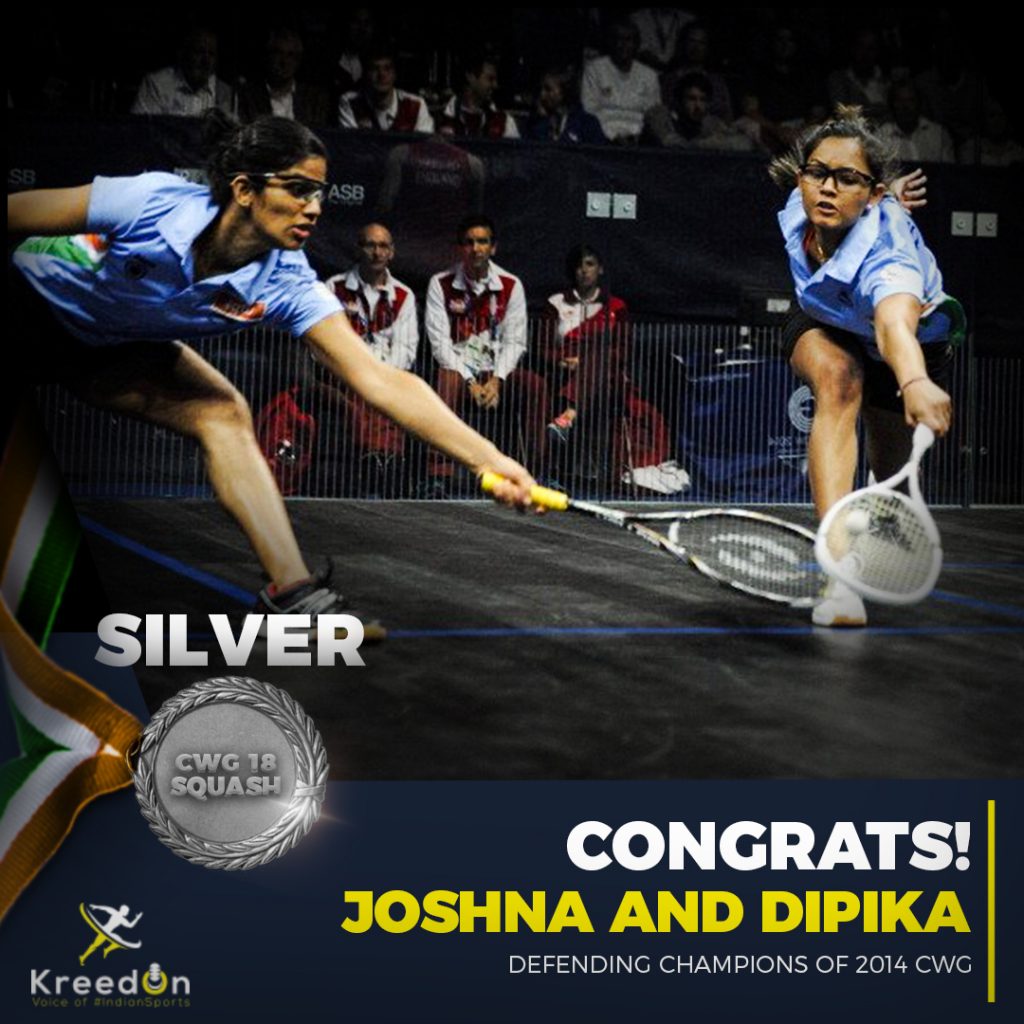 “It is always an honour when I play for India and it is even more special when I win a medal. We won a medal last time, too. To be on the podium again with Dipika Pallikal was special as a lot can happen in four years. It is good to keep squash growing and have people follow the sport. Of course, we were disappointed that we missed out on gold. It is always nice to win a gold… that’s what everyone wants. But considering the circumstances and the competition that has increased, players are a lot more equipped when they play against us. I think it’s pretty good that after four years, we are still at the top of the game,” she says.

“We both have our personal goals in the sport, but we play for the same country and that’s our priority. We both really like winning medals for the country and for ourselves. We have always wanted to be at our best while playing for India and I think that shows in the performance. It is tough for any athlete to deal with defeats because people are following you and they have high expectations. As an athlete, this is something you should go through. You should learn from it and see where you can change your game and come back as a better player.”

Joshna Chinappa on the final match at CWG

“The pair we played against was obviously very good. I wouldn’t say that we lost because of the referee. But there were a lot of questionable calls that could have changed the direction of the match and there were a few calls we didn’t really agree with; we felt they were bizarre. But the pair we lost to played really well; they deserved to win that day.”

Joshna Chinappa on being the Flag Bearer for India in Squash

“Obviously, badminton is in a different league altogether. They have a structured programme and a good system in place. And that’s why they have a lot more players coming up. With the kind of success PV Sindhu, Saina Nehwal and Srikanth Kidambi have had, there are going to be more kids taking up the sport. It is good that Dipika, Saurav and I are managing to keep squash still growing in the country, and there are people taking up the sport. It remains to be seen whether all of them go professional or not; they are still young, so we hope they become seasoned players. For now, we are doing our best with our career,” she says.

“A lot of junior boys are doing well. They have made a mark for themselves in the junior circuit internationally and they are very promising. We should just wait and see how many become professionals and represent the country as they certainly have the potential. But they need to ensure they are working with the right team and they have the finance to continue to play. I think a lot of players want to go professional and play for India. But financially, it becomes hard for them as they don’t get that kind of support. If that changes, we could see a lot of youngsters play for India.”

“I have one more tournament before the season ends, which is the British Open. I have a couple of months off before the Asian Games. So, I am planning to get back to the grind, work harder and be prepared for the Asian Games 2018.”

Vardan Pandhare
Vardhan is an author who loves creativity. He enjoys experimenting in various fields. After completing his graduation, he was sure about one thing! His love for sports. He is now living his dream of being creative with words in the field of sports. He has since then always brought the latest news and updates for all the sports fans.
Previous article
President Kovind – PM Modi heap praises for CWG medallists
Next article
Cyclists Rubi Lombo looking for a spot in Team India

Asian Squash Championship 2021: Finals for the Indian Men, Women Bow Out after Semis