If you fall behind, run faster. Never give up, never surrender, and rise up against the odds. – Jesse Jackson

India is a land of diverse talents. The country has produced some of the greatest names in almost every field. The country has no dearth of sporting talent. Some athletes have a name for broken records, while others captured hearts. Some known, some comparatively unknown, our sporting stars have always made us proud.

Today we decided to glimpse into the life of one such star, who earned respect from the entire world. This athlete embodies perseverance and dedication. She has had a short, but dynamic career. Let us get to know the life story of J.J. Shobha. 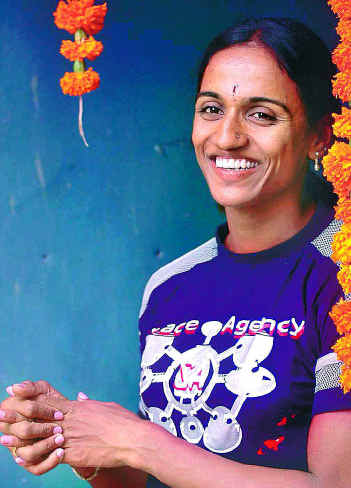 Born and brought up in a small village Pashupathilaal, in Dharwad, Karnataka, Javur Jagadeeshappa or JJ Shobha, is a spirited track and field athlete. Living in railway quarters, Shobha had an inclination towards sports from a very young age. She started pursuing athletics seriously since her 5th standard. Her dedication paid rich dividends and she started winning laurels at the junior level.

Shobha’s spectacular athletic journey started in 2002 with a bronze medal at the Busan Asian Games and a silver medal at the Colombo Asian Athletics Championships. Shobha had her golden moment in the year 2003. She won the yellow metal at the Afro-Asian Games. The victory made her an instant sensation in the country. Then came the incident that brought her international recognition.

Not many Indians can say that the entire international community applauded them at an Olympic event. JJ Shobha achieved this feat at the Athens Olympics. Though she couldn’t win a medal for the country, she sure did win many hearts! Shobha was performing well in the heptathlon event. In a weird twist of faith, she suffered an injury in the second last event, the javelin throw. The ligament tear was extremely bad and Shobha has to be carried in a stretcher. It was truly a heartbreaking site.

However, she came back, she participated, and she finished the race in style. Shobha displayed true sportsman spirit that day. She finished 11th overall out of 34 contestants, but she definitely managed to win the most respect.

“Initially, I was reluctant to take part in the 800-metre race. When the Indian contingent insisted that I should complete the event so to finish with a creditable placing, I decided to give it a try on a condition that if I develop pain I will pull out. By God’s grace, I have not only competed but finished with an overall tally of 6,172 points which is still below my personal best of 6,211 points,” she told The Hindu in an interview after coming back.

The entire experience mattered more to Shobha than just medals. She got an opportunity to interact with the best in the world. It also helped her understand her weaknesses and work on them.

The winner of the heptathlon event, Carolina Kluft of Sweden told the India Times, “I was shocked to see her in the warm-up area. I never thought she’d be able to walk again, forget run.”

The performance also won her the Arjuna award. Shobha has her second Olympic appearance in 2008 at the Beijing Olympics. Shobha managed to come 29th in the heptathlon event with 5749 points.

For more information on Indian Sports, stay tuned with KreedOn.

Mamta Thatte
A passionate foodie, a versatile writer, and now a sports enthusiast, Mamta is always open to exploring new avenues. She has a vast experience in Web Content Writing, Editing, and Social Media Management. A self-confessed coffee and dark chocolate addict, she believes in following her heart and giving her 100% into everything she does.
Previous articleIndian Sports 2018: Top 5 Athlete-Brand Collaborations of 2018
Next articlePremier Badminton League: Chennai Smashers beats Ahmedabad Smash Masters

Ramkumar Ramanathan Biography: Get To Know The Life Story of This...

Manish Pandey Biography: A Brilliant Finisher Who Can Prove His Spot...