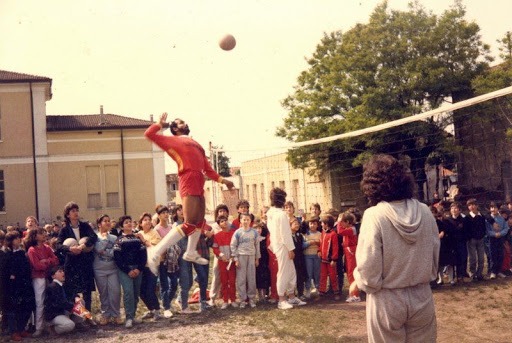 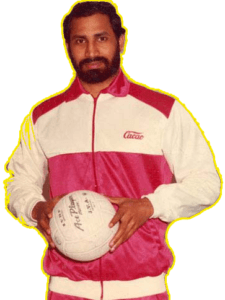 “His reach was 12 feet, it was in-born talent, given by God, he did not do any special exercise to attain this sort of jump or reach,” said Sebastian, a former Indian Volleyball captain. He used to float around the shoulders of his teammates in the court.

Jimmy George gave new elements to volleyball in India. He was an excellent player with great hand-eye co-ordination. He will always be remembered as the first Indian professional volleyball player.

Jimmy was one of the ten best volleyball players of all time and was idolized by many fans not just in India but worldwide. He lives on as a marvel and an icon in the hearts of his enthusiasts.

Jimmy George was born in Peravoor (Kerala), 1955. Jimmy’s father taught him the game of Volleyball. His father was a university level Volleyball player himself. His family, Kudakkachira family, is pretty famous in the region.  Not just Jimmy, but his seven other brothers also play Volleyball. Two of them have represented the country while the other two represented Kerala in Nationals. Jimmy’s popularity from local to international circuit didn’t take much time. While representing Kerala University as captain, he helped the team to win all the championships during the period 1973-1976.

He was selected for the Kerala state team in 1971 when he was just 16 and represented the state nine times. In 1976, he realized that Volleyball was his true calling and dropped from the Thiruvananthapuram Medical college to join Kerala Police of which he remained a member till his death. It was 1979 when Jimmy started his professional Volleyball career with a foreign club, Abu Dhabi Sports Club. Later, he traveled to Italy to join a European club.

Jimmy George played for India in the Asian championships of 1974, 1978 and 1986. Indian Volleyball haven’t heard of an Asian medal for 24 years until Jimmy and his team clinched a bronze medal in Seoul, 1986. He also captained the victory in India Gold cup international Volleyball tournament held in Hyderabad, 1986. With his incredible achievements, Jimmy George was the youngest Volleyball player to win the Arjuna Award at 21. He won the G.V Raja and Manorama awards for best sportsmen in Kerala. When he was in Abu Dhabi sports club till 1982, he was judged as the best player in the Gulf region. 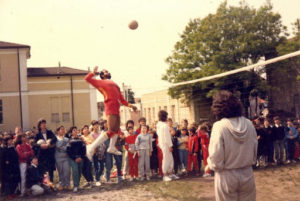 Out of the many stories about Jimmy George , one was that he could ‘hang’ for an extra second in thin air which gives him more time to logically place his fierce smashes. His style and class put him in a league of his own. While growing up, Jimmy was a good swimmer too. He was the university champion and won 4 golds in his time.

Apart from his excellent sportsmanship, he was really good in studies. He was in his first year of medical college before joining the Kerala Police department. The last match Jimmy and his seven brothers played together as a team was in 1987 before a tragic incident.

Jimmy George – LEGEND WILL BE MISSED

A shocking news broke out announcing the demise of Jimmy George in a car accident in Milan. The year was 1987 and the whole of India was in great pain. His age was just 32. It did not take him much time to create his legendary legacy. A street and 2 indoor stadiums have been named after him in Kerala and Milan, Italy. There is a foundation on his name in Kerala who awards the best sportsperson of Kerala. It’s been 28 years since his sudden demise.and we have not been able to produce another Jimmy George in this country. That bronze medal in an Asian championship was our last. One thing is certain, the next time when we will hear Volleyball in India, the cheer in our hearts would be “JIMMY, JIMMY.”

Another such fiercest attacker from India is BALLU aka Balwant Singh. Want to hear his story ?

KreedOn Network
We are a team of sports writers who research about sports in India day in day out. Please reach out to us in case of any specific requirement of digital services on [email protected] .
Previous articleSatnam Singh: The One in a Billion Basketball Player from India
Next articleLeander Paes – A Phenomenon of Indian Tennis