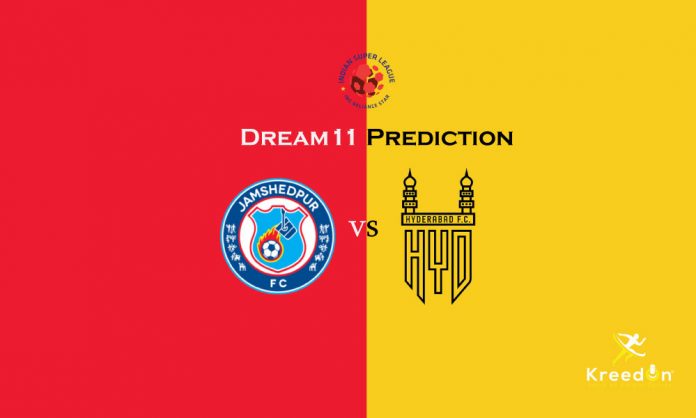 Match 10 of the Indian Super League will see Jamshedpur FC welcome Hyderabad FC at the JRD TATA Sports Complex in Jamshedpur. Hyderabad was thrashed 5-0 by ATK in their first-ever match in the ISL. Jamshedpur FC, on the other hand, earned a hard-fought 2-1 victory over newly formed Odisha FC.

Jamshedpur FC’s first match of the 6th season was as eventful as it got. They went ahead thanks to an own goal by Rana Gharami of Odisha FC. Bikash Jairu of Jamshedpur was sent off in the 35th minute. Moments later Aridane Santana of Odisha FC levelled the score. With 10 men down, having scored a goal that was not by their own player, Jamshedpur FC player Sergio Castel scored the winner in the 85th minute and secured the 3 points for his team. They played the game with lesser possession and had 1 more shot on target than rivals Odisha FC.

Going into the game against Hyderabad FC, Jamshedpur will be hoping to come out with a proper game-plan and win against another the newly formed club.

Statistically speaking, Jamshedpur has lost only 1 game in their previous 5 home games and have conceded fewest goals among any other clubs since being promoted to the ISL in 2017.

The Hyderabadi’s had a forgetful first game to begin their campaign in the ISL. They were thrashed 5-0 by ATK in Kolkata. The Hyderabad FC team consisted of experienced players and coach who had previously worked together, lacked in creativity and defensive plan. They were already 3-0 down by the half time and conceded a further 2 late goals scored by Edu Garcia in the 88th and 94th minute.

Hyderabad will be looking much ahead of their defeat to come out as a well-rounded and robust unit to restart their campaign against Jamshedpur with the hopes to get some points on the board.

Paul conceded 1 goal in the opening game of the ISL, however, after facing 12 shots he made 1 save, 3 catches and 3 clearances. He is an experienced keeper who has represented India and played in ISL for the last 6 seasons. He is our first Dream11 pick for the night as he will be bringing his experience to the game tonight.

Gurtej Singh in his first game made 25 passes with an 84% passing accuracy. He also registered 12 clearances, 2 interceptions and 1 tackle. Pereria averaged 15 passes and maintained an 80% accuracy while making 5 tackles, 8 clearances and 2 blocks. Tiri, in the first game, had 8 clearances, 2 blocks and 2 interceptions. A 3 man defence will complete our defence for the 10th matchday.

Adil Khan was on the receiving end of a 5-0 beating on their opening day loss to ATK. However, Khan is a sturdy midfielder whos presence in the midfield will either help in scoring or defending a goal. He made 44 passes, had 1 shot and 2 crosses while making 8 tackles. Marcelo Pereria is a prolific goal-scorer in the ISL and will look to get his name on the score-sheet when he faces Jamshedpur.

A fact that will be helpful for Marcelo’s team is that he has never been on the losing side in his career when he faced Jamshedpur FC. Laldanmawia Ralte played for 44 minutes against ATK in which he made 18 passes and maintained a 72% passing accuracy while making 2 tackles and 1 interception. F M Luna aka Piti registered an assist in his first outing in the ISL. He also had 4 shots and 3 crosses while making 43 passes in his first game.

Robin Singh on his day can provide and score crucial goals for his team. In the first match, he made 27 passes, 2 tackles, 1 interception, 1 block and 1 clearance. Farukh Choudhary averaged 30 passes in his first game against Odisha while having 1 shot and 2 crosses. Sergio Castel scored the winner for Jamshedpur in the 85th minute and registered 5 shots and 2 crosses while making 31 passes.

KreedOn Network
We are a team of sports writers who research about sports in India day in day out. Please reach out to us in case of any specific requirement of digital services on contact@kreedon.com .
Previous articleLalita Babar Biography: Age, Rio Olympics, Information, Family, Husband
Next articleU-23 World C’ships: Indian wrestler proceeds to bronze-winning match