There are a number of similarities between the Indian Premier League and the Pro Kabaddi League. But it has to be a freakish coincident that both leagues had a team from Jaipur as their first-ever champions. Jaipur Pink Panthers, one of the most famous teams in PKL, won the inaugural title in 2014. Although the team managed to reach the finals of the 2016 season, the Panthers have mostly failed to relive the magic of 2014. So are they capable of grabbing the silverware once again? We find out. Here is everything you need to know about Jaipur Pink Panthers in Pro Kabaddi 2019. 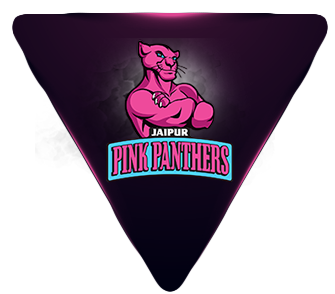 The Panthers are one of the eight founding members and the champions of the first-ever Pro Kabaddi League. In 2014, the team from Jaipur made sure that this league would become famous amongst people, with their exceptional performances and celebrity owners. But it has not been a smooth journey at all with the Panthers making it to the finals only once after 2014 and 4 non-semi-final/play-off finishes.

Jaipur team has probably the most famous and at the same time most invested owners of all the teams – Abhishek Bachchan. The Bollywood actor has not only been an integral part of Jaipur’s journey, with his presence at the games and animated celebrations but he has also played a crucial role in bringing a spotlight on the Pro Kabaddi League.

With names like Abhishek Bachchan, Amitabh Bachchan and Aishwarya Rai Bachchan in their dugout, it is no surprise that Jaipur Pink Panthers have attracted a number of sponsors. Finolex Cables, the electrical cables manufacturers are Jaipur’s title sponsors. TYKA are the kit manufacturers for the team going in the seventh season.

The team has a long list of sponsors with Lux Cozi as co-sponsors, Reliance Digital, The Muthoot Group, and Kalyan Jewellers as associate sponsors. PayTM and Insider as ticketing sponsors and Kokilaben Dhirubhai Ambani as the Sports medicine partners.

L. Srinivas Reddy, a former Indian Kabaddi player and a man with a bagful of coaching experience will continue to be Jaipur’s head coach. Reddy has been an assistant coach of Telugu Titans and Haryana Steelers in PKL before taking reigns of the Panthers.

In the international scenario, Reddy has managed South Korea and Australia before being appointed as India’s head coach in 2018. He won the bronze medal with the South Korean team at the 2014 Asian Games and won the Dubai Masters 2018 with India.

Jaipur won the Pro Kabaddi League title in 2014 but have failed to find the similar success since then. Other than the final appearance in the 4th season, the Panthers have failed to even make it to the play-offs.

The first season could not have started any better for the Pink Panthers. They absolutely dominated the group stage with 10 wins in 14 games, finishing at the top of the table. One can imagine how ruthless the Panthers were, looking at their score difference – 100!

Jaipur crushed Patna Pirates 38-18 in the semi-final to make it to the first-ever final of the Pro Kabaddi League. The Panthers defeated U Mumba 35-24 in the final to be crowned as the first-ever PKL Champions.

Maninder Singh was Jaipur’s best raider with 130 raid-points, 3rd best in the league. Rohit Rana was the best defender with 38 tackle points.

The defending champions failed to replicate the first season’s performances, failing to even qualify for the semi-final of the tournament. Jaipur finished 5th on the table with just 6 wins in 14 games, finishing 3 points behind the fourth-placed Patna Pirates. Rajesh Narwal was the team’s best player with 69 raid-points and 87 points in total.

The slide down the table continued for the Panthers, finishing 6th on the table in the third season. The wins were even more difficult to come by than before with just 4 W’s to their name in 14 games. Jaipur lost eight games in the third season to finish with mere 28 points. Poor performances from both raiders and defenders were the main reason behind Jaipur’s low finish as none of the players managed to finish in the top 10 of most raid or tackle points.

Jaipur managed to forget about two disastrous seasons and played like their old self in the fourth season. The Panthers finished 3rd on the table, with 8 wins in 14 games. It was the first time they qualified for the semi-finals since their title victory in 2014.

The Panthers defeated Telugu Titans 34-24 in the semi-final to make it to the final of the Pro Kabaddi League for the second time in team’s history. But this time, the defending champions Patna Pirates were too hot to handle for Jaipur, as the inaugural champions were beaten 29-37 in the final.

But Jaipur’s exceptional performance in the fourth seasons, just six months after a sixth-place finish, was largely due to the duo of Jasvir Singh and Amit Hooda. Jasvir was the team’s best raider with 82 raid-points. Amit, with 51 tackle points was the best Jaipur defender and the second-best in the league.

The Panthers were drafted in Zone A for the fifth season after the addition of four new teams. But it was yet another disastrous season, to say the least, with the team finishing 5th in Zone A. They won just 8 out of the 22 games, losing 13 and finishing with a score difference of -91.

Things hardly improved for Jaipur in the sixth season and if you look at the number of wins, it only got worse. With just six wins in 22 games, Jaipur finished 5th in Zone A once again, just one point ahead of the last-placed Haryana Steelers.

In an otherwise disappointing season, Deepak Niwas Hooda finished with 196 raid-points, sixth-best in the league and Sandeep Kumar Dhull finished with 67 tackle points.

In the auction, Amit Hooda was Jaipur’s most expensive buy for ₹53 lakh.

Sawai Mansingh Indoor Stadium is Jaipur’s home stadium. The state-of-the-art multi-purpose stadium has a capacity of 20,000 people. Jaipur will host the 10th leg of the upcoming season at the Sawai Mansingh Stadium from 21st September to 27th September 2019.

Here are the Season 7 fixtures for the #PantherSquad.

We begin our journey against @U_Mumba in Hyderabad.

After failing to qualify for the playoffs in the last two seasons, Jaipur will be hoping for a change of fortune with a new format. Twelve teams will play in the double round-robin format and top six will finally fight for the biggest prize. Jaipur’s first game will be a rematch of 2014 final on 22nd July.

Chinmay Pagar
I might be a Mechanical Engineer on the paper, but I was a Sports enthusiast since childhood, screaming at the TV watching cricket at the age of 4. Not much excites me other than sports unless it's free pizza. I can watch literally anything remotely related to sports; Cricket, Football, Tennis, F1, Hockey, Athletics, Chess, you name it! And I love to write too, so at the time I'm not watching sports, I'm writing about it. Or eating pizzas, of course.
Previous articleVikas Thakur Biography | Age, family, weightlifting, career info
Next articleRajyavardhan Rathore makes bold statement on India’s Olympics potential

6 probable teams that will make it to the Pro Kabaddi...