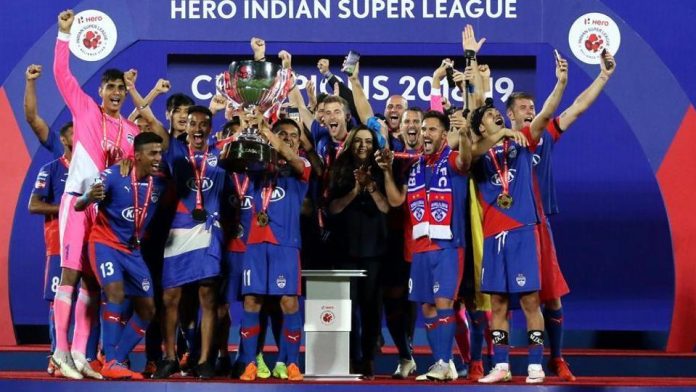 The Indian Super League is without a doubt the most famous and cash-rich football league in India. But it is still miles behind the Indian Premier League or any European football League for that matter. So how much do the winners of ISL really get after winning the title? How much do runner-ups end up with? Here is everything you need to know about ISL Prize Money:

The champions of the Indian Super League pocket ₹8 Crores after their triumph in the final. Man, just think about it – Rahul Bheke scoring a winner in the 117th minute last year, to bag ₹8 crores for Bengaluru FC. That also meant Kerala Blasters had to go home with only ₹4 crores as the losing finalists.

Two semi-finalists receive ₹1.5 crores each for making it to the playoffs of the league. That’s ₹15 crores spent on four teams right there!

Apart from the team’s performances, clubs also fight for the ‘Best Pitch Award’. The prize money of ₹10 lakhs is awarded to the club with the best home ground throughout the season. Last season, Kerala Blasters won the award for their grooming and maintenance of the home turf, Jawaharlal Nehru Stadium in Kochi.

Along with the prize money to top four teams, ISL hands out a number of End of the season awards. Golden Boot, awarded to the top scorer of the league takes home ₹3 lakhs. FC Goa’s Spaniard forward Coro has won two consecutive Golden Boots in the past two seasons. An Indian is yet to win the Golden Boot though. Sigh!

The best goalkeeper of the season receives the Golden Glove award and ₹3 lakhs in prize money. For the past three seasons, Indian goalkeepers have dominated the award with three different winners.

The best player of the tournament is given the ‘Hero of the League Award’ and ₹5 lakh. Last year FC Goa’s Coro won the award, along with the Golden Boot. Sunil Chhetri won the award in 2017-18, playing for Bengaluru FC in their first season.

Emerging Player of the League is given to best Indian youngster of the league. The award comes with ₹2.5 lakhs in prize money. Last year, Kerala Blasters’ attacking midfielder Sahal Abdul Samad was named the best upcoming player.

The best creative player of the season, with most assists to his name, is awarded the ‘Winning Pass of the League’ and ₹1 lakh. Last season, Mumbai City FC’s Arnold Issoko won the award with eight assists.

ISL also has one of the most unique awards you’ll ever see during football’s post-match ceremony (if there is one) – Fittest Player of the League. As the name suggests, the fittest player of the season bags ₹2.5 lakhs.

Apart from the End of the season awards, there are a number of trophies and cheques up for grab at the end of every ISL game. In the post-match ceremony after every game, the winning team receives ₹50,000. The Hero of the Match or simply Man of the Match also takes home ₹50,000.

Chinmay Pagar
I might be a Mechanical Engineer on the paper, but I was a Sports enthusiast since childhood, screaming at the TV watching cricket at the age of 4. Not much excites me other than sports unless it's free pizza. I can watch literally anything remotely related to sports; Cricket, Football, Tennis, F1, Hockey, Athletics, Chess, you name it! And I love to write too, so at the time I'm not watching sports, I'm writing about it. Or eating pizzas, of course.
Previous articleHere’s why IOA rejected Draft National Sports Code 2017
Next articleIPL auction 2020 Live: Full list of updated squads, released, traded players

Once begging on the streets of Kerala R Manikandan to Train...

Indian football – The sleeping giant of the world