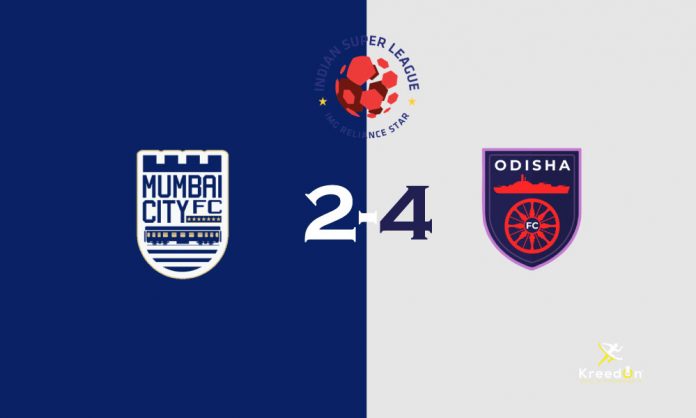 In the 12th match of the Hero Indian Super League, Mumbai City FC was defeated by Odisha FC in a thrilling 4-2 encounter at the Mumbai Football Arena. Odisha registered their first win of the season while Mumbai suffered their first defeat this season.

Having lost narrowly in both their opening matches, Odisha desperately needed a victory. And boy did they win!

After having lost their first 2 games against Jamshedpur and NorthEast, Odisha FC was going into this game with a must-win attitude. They were defeated in the first 2 opening games 2-1. The issue with the team was not scoring goals but how to defend well.

They did just that in the game against Mumbai. Odisha midfielder Xisco Hernandez opened the scoring for his team in the 6th minute. Aridane Santana doubled their lead in the 21st minute and then Jerry Mawihmingthanga made it 3-0, five minutes before the halftime.

It seemed like there was no way for Mumbai to return from the 3 goal deficit, however, after the halftime they started the game brightly and were rewarded with a goal in the 51st minute after Mohamed Larbi scored a penalty to reduce the deficit to 2 goals.

It was certainly Odisha FC and Aridane Santana’s day as he scored his 2nd goal of the game to restore the 3 goal lead. Santana became the joint top scorer of the ISL with David Williams who had scored the 1000th goal of the league in ATK’s 1-0 win over Chennaiyin FC.

Mumbai registered a total of 14 shots with just 2 being on target, they tried frantically to score a goal and maintained a 53% possession. In the dying minutes of the game, 19-year-old Mumbai City defender, Bipin Singh took a shot at the Odisha keeper who had left his right side exposed. The shot deflected off his chest and went into the goal, however, it was too late for Mumbai to try and level the score.

After a couple of disappointing runs, Odisha announced themselves in the league with a convincing win. However, for Mumbai, their return to the home ground was disappointing as the registered a 4th consecutive loss at their home.

KreedOn Network
We are a team of sports writers who research about sports in India day in day out. Please reach out to us in case of any specific requirement of digital services on contact@kreedon.com .
Previous articleFull list of ISL Sponsors 2019 | Indian Super League Sponsors
Next articleIndia’s Hockey Olympic Qualifiers: Full Schedule, Team, Live Broadcast