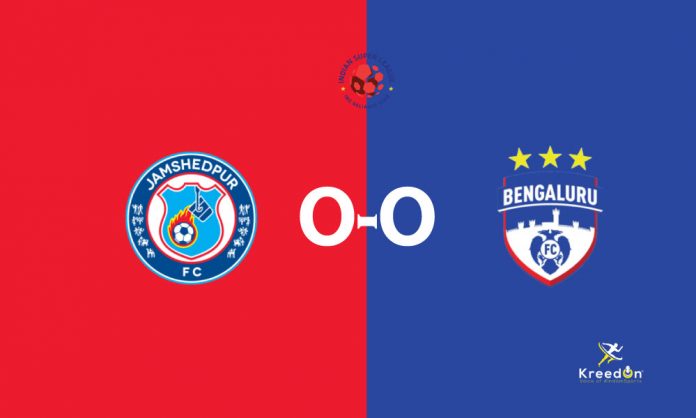 The 15th match of the Hero Indian Super League featured Jamshedpur FC who played a goalless draw against Bengaluru FC. Both the teams went into the match unbeaten. Jamshedpur FC had won both of their opening games while Bengaluru FC had drawn their first two.

The game was always going to be a difficult one for both teams’ attackers, as it featured arguably two of the best goalkeepers in India. Gurpreet Singh and Subrata Paul showed their class throughout the game and denied every shot on target they faced.

Defending champions, Bengaluru FC kicked off the game. Their long pass ahead was intercepted by Jamshedpur midfielders and they made their first advance on goal which was cleared out by Bengaluru.

In the 5th minute, The Blues picked up the ball and gave some space for Sunil Chhetri to launch a strike on goal, which was eventually saved by Paul. Minutes later, Jamshedpur could have scored the first goal of the night. However, unfortunately for Sergio Castel, his shot hit the post after Gurpreet had made an outstretched attempt to save the ball.

In the 11th minute, Paul punched the ball out of his area after an in-swinging corner from Dimas Delgado. The ball was recovered by Bengaluru midfielders and crossed the ball into Paul’s box once again which. A strong header by Juanan only lacked positioning only to be saved by Subrata. The 19th minute saw a similar scenario as a corner found Juanan again who set up his teammate to take a close-range shot, which was brilliantly saved by Subrata.

Bengaluru FC had a couple of more opportunities to score. Blues players either found their shots saved by the Steelers keeper or their shots weren’t convincing enough to find the back of the net. Eventually, an entertaining first half came to an end with both teams having some excellent chances to go ahead.

Subrata Paul’s continued his superb form even in the second half. Micheal Onwu ran past Jamshedpur defenders and had taken a shot at Subrata who was advancing at the striker. His shot was eventually saved. On the other end, Gurpreet Singh was also showing his class and saved a strong shot which came from a Jamshedpur free-kick.

What could have been a goal of the season in the 56th minute, Farukh Choudhary attempted an overhead kick which came off his shin and was travelling goal-wards. Gurpreet Singh proved why he’s India’s best keeper as his reflexes were so sharp, he saved Farukh’s marvellous attempt with one hand and has become one of the saves of the season.

The last 15 minutes consisted of Bengaluru attacking and Subrata racking up saves after saves.

The match was evenly contested and both the sides still remain unbeaten. Jamshedpur went top of the league after the draw while Bengaluru moved up one place to 7th.

Warad Bhat
Warad is passionate about brands, football, films and food. He enjoys reading about latest gadgets and technologies and spends his time either watching movies or cooking something new. Warad is a spiritual person who believes that to change the world you must change yourself from within.
Previous articleSaarLorLux Open: Lakshya Sen stuns Weng Hong Yang in final
Next articleList of 30+ Best Pubg Players in India: Meet the Masters of Gaming

Bengaluru FC Wins Maiden ISL Title With a 1-0 Win Over...