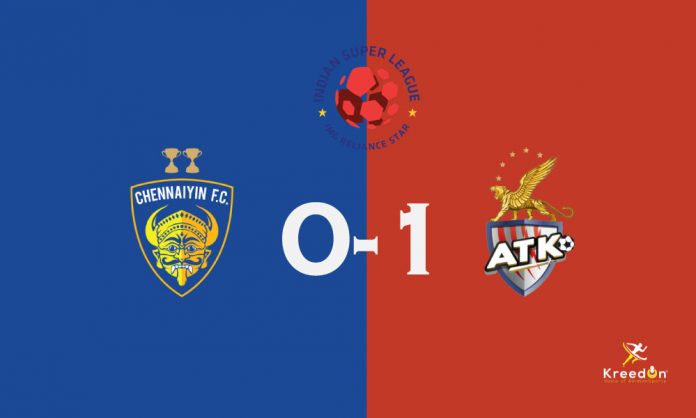 In the 11th match of the Indian Super League, ATK defeated Chennaiyin FC in a narrow 1-0 win at the Jawaharlal Nehru Stadium in Chennai. It is a worrying start for 2-time champions Chennai as they have continued their poor form since the end of last season.

ATK, who had earlier scored their 100th ISL goal in the first match against Kerala, brought up the 1000th goal of the Indian Super League in the win against Chennaiyin.

A game of chances

After suffering an opening day defeat at the hands of Kerala Blasters, ATK demolished newcomers Hyderabad FC 5-0 in their second ISL game. They had all the positivity and momentum going into the game against Chennaiyin FC, who has continued to struggle since the last season. After a 3-0 defeat at the hands of FC Goa then a goalless draw against Mumbai City, it was a must-win game for Chennaiyin.

The home team played the entire game with passion and stuck to their game plan of creating more chances. They registered 19 shots with 5 being on target. They also kept 61% possession. However, Chennaiyin lacked the final touch that would have given them their first goal in 6 ISL games.

In the 47th minute, David Williams was at the right place at the right time to pick up on a deflected shot and give the away side a goal. He had scored a brace in the previous game against Hyderabad. By scoring the only goal of the night, Williams became the top goal scorer of the current season and has justified ATK coach Habas’ decision to bring in the Aussie striker to score crucial goals.

In the 73rd minute, ATK goalkeeper Arindam made a match winning save and justified his place in our Dream11 team.

In the after-match press conference, ATK Coach Habas said, “I am happy with the squad. But I am not happy with the game. But we made a lot of individual errors in our football. The positive thing is that we won the match. We had to suffer today. The more important thing is to score. But we have to improve. Maybe the team today was tired,”

Since the ISL began, ATK and Chennaiyin FC have won the league every alternate year. Both the teams have 2 titles each. However, they haven’t been able to maintain the same level of consistency in their games since and have suffered.

Chennaiyin FC finished bottom of the league last season while ATK finished 6th. They also had the record for scoring the fewest goals in the previous ISL season, with Chennaiyin FC scoring only 16 goals while ATK scored 18 goals.

KreedOn Network
We are a team of sports writers who research about sports in India day in day out. Please reach out to us in case of any specific requirement of digital services on [email protected] .
Previous articleSports minister makes important revealation about CBSE’s plan on sports
Next articleCarabao Cup Round of 16: Double Stunner ft. Liverpool, Manchester United

ISL 2018-19 Semi-finals Preview: NorthEast United or Bengaluru FC, Who Will...