IPL Auctions 2020: 5 Most expensive players & why they went for big bucks 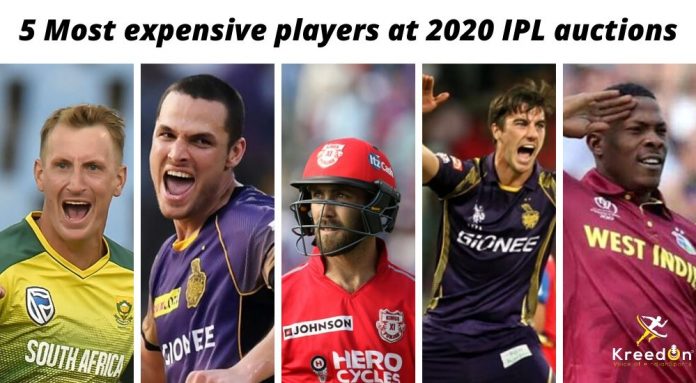 As many as 62 players were bought by eight franchises as curtains fell on the Indian Premier League (IPL) 2020 Auctions in Kolkata on Thursday. Of these 62 players, 29 were foreign players. And with not many high-profile Indians on offer, the overseas players were going to be in demand. That is exactly what happened, with the top 5 most expensive players in IPL Auctions 2020 were all foreigners. Here’s the list of most expensive players and why they went for that much:

Nathan Coulter-Nile comes at number 5 in the list of top five most expensive players at the IPL auction 2020 after the Australian pacer was sold for ₹ 8 crore to the defending champions Mumbai Indians.

But why he went for that price is still a mystery for two reasons. One, he is prone to injury and last featured in a T20I back on 27th February. Second, Mumbai Indians are already well-stocked in the pace department having Trent Boult, Mitchell McClenaghan, Jasprit Bumrah, Lasith Malinga, and Dhawal Kulkarni among their ranks. However, his impressive performances in the domestic circle seem to have grabbed the attention at the auctions.

And then, like IPL, Mumbai Indians and Chennai Super Kings went into a bidding war, and there was no stopping. From his base price of ₹ 2 Crores, the price went straight up to ₹ 8 Crores.

Impressive performances just before the auctions can land you a good deal at the IPL auctions. And when the performances are here in India, your price is definitely going to skyrocket. Just ask Sheldon Cotrell! The West Indian was rewarded for a decent performance against India with a package of ₹ 8.5 crores by Kings XI Punjab.

That is a staggering 17-times more than his modest base price of ₹ 50 lakhs. It was again a result of a three-way bidding war between Delhi Capitals, Rajasthan Royals, and Kings XI Punjab. But, determined to extend their West Indian repertoire, it was the Kings who had the last laugh.

In the ongoing ODI series against India, the Carribean has picked up four wickets in two games, including prized wickets of Virat Kohli and Rohit Sharma. Although he is untested on the IPL front, much will be expected from Cotrell. Except, of course, for his famous ‘salute’ celebration!

Chris Morris was probably the most surprising buys of the auction, with the South African all-rounder attracting a whopping ₹ 10 crore from Royal Challengers Bangalore. There were precisely two reasons for this: One, RCB had missed upon a quality all-rounder earlier in the auction. And second, there were really limited options in the market further in the evening. The south Indian team, thus, decided to go all out for Morris, but so did two other teams- Rajasthan Royals and Kings XI Punjab.

After an intense bidding war, when the price rose to ₹8.25 crores and it seemed as though RCB had their man, Mumbai Indians woke up at the last moment. It was only after a quick exchange of bids that MI smartly decided to back. But by then, the price had touched nine digits.

Although an expensive buy, Morris would bring in tonnes of experience and power-hitting towards the end apart from his antiques with the ball.


Power hitters have always been the favourite babies of franchises at the IPL auctions. And Glenn Maxwell was the big buy this auction. Having been out of the international circuit for some time now owing to certain ‘mental health’ issues didn’t bother franchises from bidding for the Australian all-rounder.

But it was his former Kings XI Punjab who wanted Maxwell the most. Anil Kumble, who is the KXIP’s head coach, explained the move: “For us, the gaps that we had to fill were pretty evident. We had to fill the fast bowler slots and also the power-hitters because for us, in the middle order we needed someone who could really be a destructive player and that’s why we chose Glenn Maxwell.”

It makes real sense for Maxwell, who is seeking a refreshing start to cricket, to return to Mohali, where is he is known by the name of ‘Glenpreet Singh’.


Pat Cummins was the ultimate surprise package of the 2020 edition of the IPL auction. Although everyone knew he would be a big buy, no one assumed he would go on to break Ben Stokes’ record of ₹ 14.5 cr to become the second-most expensive player in the auctions’ history.

Explaining Kolkata Knight Riders’ decision to go all-out to buy Cummins, coach Brendon McCullum said, “I thought he was the best player of the auction…as a cricketer he’s grown, his body has become robust. He is now the vice-captain of Australia cricket team, which is a mark of his development. Wonderful to secure a world-class player.”

Cummins is famous for his accurate deliveries. The 32-year-old brings in a vast amount of experience, a thing that KKR have been craving in the bowling department for too long. Last season, the Riders’ biggest challenge was to stop giving away runs. This makes the Cummins’ signing sensible.

KreedOn Network
We are a team of sports writers who research about sports in India day in day out. Please reach out to us in case of any specific requirement of digital services on [email protected] .
Previous articleCFC vs KBFC Dream11 Prediction 2019 | Chennaiyin vs Kerala Blasters
Next articleLive IPL Auction 2020: Royal Challengers Bangalore 2020 | RCB 2020 | Detailed Squad | Price | Players

IPL Auctions 2020: Updated squads of all the 8 IPL teams

Sam Curran : The Star English Batsman That Could be the...

5 Players Chennai Super Kings could target in the IPL Auction...

IPL Auctions 2019: Why Things Could Be Different for Ishant Sharma...