In the IPL transfer window, defending champions Chennai Super Kings did the obvious by preserving their core of Dhoni-Raina-Jadeja along with Du Plessis, Bravo, and Vijay. However, they parted ways with Mark Wood, Kanishk Seth, and Kshitiz Sharma, who were all released.

In IPL’s 11-year-long history. no team has ever managed to successfully defend its title. Could CSK break the trend? As the team buckle up for the upcoming auctions, we look at the top 5 players that Chennai Super Kings should sign to have the best shot at the title. 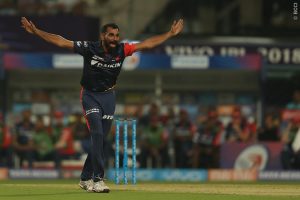 Injuries and controversies have been haunting Shami and his career. As a result of this, he was rested from the Indian contingent for a while and was recently released from Delhi Daredevils Capitals.

This would be an impressive signing for CSK and one that could possibly propel them to the next level. If at all they manage to keep him fit with intermittent rest, Shami could be a real deal for CSK. He is an outstanding bowler with new-ball and is capable of taking the batsman by surprise with variations in bowling, especially in the death overs. However, it goes without saying that Shami won’t come cheap, especially since he is one of the few experienced Indian fast bowlers featuring in the auction.

Axar Patel is one of those rare players in the IPL auctions who has a vast IPL experience, played International cricket and is relatively young. Axar could be deemed as the find of 2014 IPL season and has been an ever-present figure for the team ever since.

Last season was not as impressive though, with the 24-year-old failing to keep with his fitness.Nonetheless, Patel could prove to be that one player who would come in Ravindra Jadeja. Like Jadeja, Axar is also a left-arm orthodox spinner and has the ability to hit the ball out of the park with his willow. Plus, he could be the real successor for veteran spinner R Ashwin, who left the team in 2016.

Jaydev Unadkat was the star bowler in the 2017 IPL season where he picked up 24 wickets under the able stewardship of MS Dhoni at Rising Pune Supergiants.
In the following season, he went on to become the costliest buy of the season at ₹11.50 crore for Rajasthan Royals. However, he failed to live up to the hefty price tag and was consequently released in this transfer window. Unadkat has been in prolific form in domestic cricket lately.

CSK could bring in the talented pacer at a cut-price without significant risk and let MS Dhoni do his magic of rejuvenating Jaydev’s form in IPL. But the big question is could CSK afford CSK? On one hand, while Unadkat is the costliest Indian on offer, CSK, on the other, only have ₹8.4 crore in the kitty.

Jason Holder has risen on the international cricket scene has been spectacular. West Indies has a track record of producing some of the world’s best all-rounders (consider Darren Sammy, Kieron Pollard, Dwayne Bravo, and the list goes on). In fact, Holder, along with Hetmyer and Shai Hope were some of the few players to star in the team’s tour of India recently.

Holder has the ability to swing or bounce the ball and can bowl some blazingly fast deliveries. Moreover, he could be a force to reckon with the bat coming in down the order.
With Bravo ageing and CSK needing a new fast-bowling all-rounder, Jason Holder could be a perfect player.

Even though Heinrich Klaasen may be new to the international cricketing scene, he has already established himself as a regular in the South African side. Although his stint in IPL was anything but impressive, Klaasen still remains a talented batsman.

In fact, he can dovetail in the league easily with some experience. Moreover, he could benefit from MS Dhoni, who has a long history of identifying and guiding talented youngsters. He is a destructive hitter of the ball and would thus be comfortably at home at CSK.

Monish Gadiya
Monish Gadiya is the Head of Content at KreedOn. He is a thorough tech-enthusiast and believes that innovation is the answer to all the problems prevalent in the society. Monish graduated from University of Pune with a degree in Civil Engineering before pursuing a post-graduate diploma course in intellectual property rights. A die-hard football fan, he has represented his college at various football competitions.
Previous article
BWF World Tour Finals: PV Sindhu Makes a Winning Start; Sameer Verma Loses
Next article
Manika Batra Becomes First Indian to Win ‘Breakthrough Table Tennis Star’ Award

Revealed: This is when MS Dhoni returns to cricket action