Team India is just one match away from securing a historical Test series victory at the provenance of cricket. On the final day of the 4th test at Oval, as Shane Warne said, all three results were possible especially with the start England had during the last session of day 4. Virat Kohli and his squad have been displaying formidable performances in the longest format for the last couple of years and things just get better for them every time. The Oval test was the penultimate match of the Test series and the most crucial match of the series so far. Remember when this series began, it was supposed to be India’s revenge for the defeats back in the 2014 and the 2018 England tours. Guess what, we are almost there.

The return of Chris Woakes

In the absence of Ben Stokes, England really misses that savior all-rounder both with the ball and the bat. No one except Chris Woakes could be trusted to fill that void. But unfortunately, he was unavailable for the initial three tests. When Woakes returned to the playing XI, not only England finally got their missing piece in the puzzle, but the perfect one to go rebel against the Indian skipper Virat Kohli.

In 2014, Virat had a horrendous outing at England failing against James Anderson on most occasions. Four years later, Kohli proved that he is one of the best to ever play the game. He scored 593 and finishing as the top-scorer of the series despite the defeat. James Anderson lost the contest in that series but Chris Woakes was the only one to outfox the skipper multiple times. India’s first innings were completely owned by Chris Woakes and Olly Robinson bowling them out for 191. Woakes claimed the big shark Rohit Sharma in his first over but Kohli was immovable. He stood in the middle of the storm and scored a gritty fifty before Robinson dismissed him.

The man with the golden arm

Shardul Thakur has always been a surprise package. But the most flabbergasting contribution he made in his international career was the pair of half-centuries he scored in the Oval Test. India was 117 for 6 when Ajinkya Rahane left the field and Rishabh Pant had to hang on with the tail-end. But the entrant Shardul Thakur refused to stay covert. Instead, he took charge of the innings scoring a quickfire 57 from 36 balls, an innings containing 7 fours and 3 sixes. A brave outing from the right-arm medium pacer was the difference between both sides; in terms of runs and mentality. It wasn’t just 100 runs added in those two innings, but every time when he drove the ball down the ground and clears the fence, the Englishmen knew that the match is slipping away from them.

Middle-order to the rescue for England

The English top order was swept away by Umesh-Bumrah. They were struggling at 62 for 5 when Jonny Bairstow and Ollie Pope stitched a crucial partnership. It brought them back into the game. England‘s fighting spirit and the game was alive. Moeen Ali and Chris Woakes took their side past the trail runs. Ollie Pope scored 81 runs under pressure and Chris Woakes did total justice to the role of a complete all-rounder by scoring a fifty.

A personal milestone for Hitman 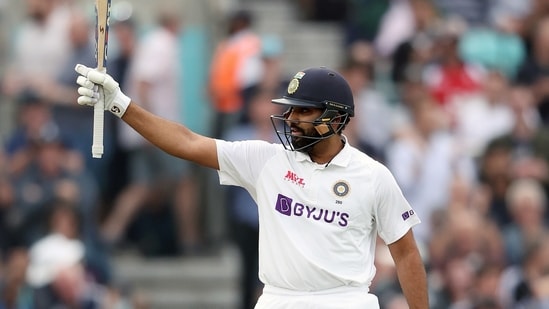 On this England tour so far, Rohit Sharma had one of the best Test series. Already a proved limited over batsman, the 34-year-old recently excelled in the longest format of the game. He climbed up to the best test rankings in his entire career. Out of all the superhuman feats he has achieved in cricket including three ODI double hundreds, an overseas test century was missing.

When India set out to begin their second innings of 99 runs behind the Englishmen, the stage was ready for the Hitman show. Except for a bizarre drop by Rory Burns, Rohit’s innings was nearly a perfect knock. Every drive and pull shot was exquisite and from 94, he hit a massive six coming down the pitch for his maiden test century outside India. For anyone who watched Rohit batting that innings, it felt really bad about the way he got out. The wicket delivery was a possible slip from Woakes who pitched the ball very short and traveled to the batsman with the least momentum. Rohit played the shot early finding a top edge and caught near square leg. But it wasn’t a lone show by the Hitman.

Indian bowling was too good for England

The game was evenly poised until the end of Day 4 when the English openers, Rory Burns and Haseeb Hameed strongly began the final innings. On the final day, everything fell apart after the 100-run opening stand for England. The same middle order which rescued England in the first innings lost the grip this time, quite terribly. Ollie Pope, Jonny Bairstow, and Moen Ali scored 2,0 and 0 respectively. The fierce Indian bowlers ran riots over the English batting department with great pace and swing. Bumrah’s deadly deliveries to dismiss Pope and Bairstow was a treat to watch for the Indian fans. It was just another instance where this solid Indian squad displayed their character and grit to triumph through tough times.

Who is the fastest bowler in India? Complete List of Top...

Ishant Sharma out for second test, this pacer likely to replace...