From a Common Delhiite to India’s No. 1 Table Tennis Player – Manika Batra

At the age of 22, almost everyone of us are baffled about our careers and goals and exhibit a series of wavering efforts.  But  there are few people amidst us who are focused on their goals and remain steadfast in their efforts. We have a great living example of such a person who by showing exemplary courage and determination became India’s Number 1 Table Tennis player.  At first sight  she will look like an ordinary 22 year old but once you give her a TT paddle she will rock the stage. Manika Batra, India’s top ranked female table tennis player, is at  115th position in the world. Her journey is an inspiration for all of us. 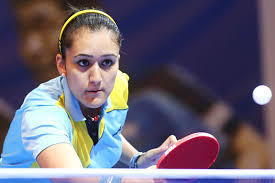 Born on 15th June 1995 in Delhi, she was the youngest of three children. She started playing TT at the age of 4. Her life was not easy as a kid as she switched many schools for better training opportunities and finally ended at Hansraj Model School. She won a state level tournament in under 8 category . After that she decided to be trained under Coach Sandeep Gupta. Eventually she became best player in Delhi and then in state level matches. Later she got through Jesus and Mary College but she hardly attended college. she   was always engaged in training and travelling so she dropped out of JMC and had gone for a correspondence in BA program to DU. She even got modeling proposals which she  gave up for focusing on Table Tennis. Many people even advised her to quit game and opt for modeling but she continued chasing her dream.

“Nobody can question my choices as long as I’m doing well. So I just keep performing and winning to keep all advices from Well Wisher’s at bay.”      – Manika Batra

Manika Batra – Birth of a champion:

She won silver in her first National championship at the age of 15. And  she didn’t look back after this.  Batra won the silver medal in the under-21 category of the Chile Open in 2011.  This led to table tennis federation making big hopes from Delhi girl. She represented India at the 2014 Commonwealth Games at Glasgow, where she finished quarterfinalist, as well as the 2014 Asian Games. She won three medals at the 2015 Commonwealth Table Tennis Championships. Batra won three gold medals at the 2016 South Asian Games. She qualified for the women’s singles event of the 2016 Summer Olympics by winning the South Asia group of the qualification tournament in April 2016. In 2017,  she along with Mouma Das (a senior table tennis pro) reached the quarter final in women’s double at the world championships. They became the first Indian pair  to reach the last eight of the world event in 61 years.  In 2017,  her single ranking dropped off from mid 80s to 115th. But this NO. 1 Indian player hopes to bounce back. She has her eyes set on the Tokyo Olympics 2020 and 2018 Commonwealth Games, Australia. “I’m optimistic about my performance. I’m in good form, so the results will show soon.” Says batra.

Apart from being a great TT player, she has the urge to create a new era for TT. She wants Table Tennis to grow and gain popularity in India.  And having a firm faith in her achievements and potential, she knows that she is in the unique position to make that possible. She is aware that the only way to make TT popular is by winning.  “If we start winning in Olympics and Commonwealth Games, I think table tennis can become like, say badminton,” she said.

The elating part is that, this is just the beginning for  this 22 year Delhiite. Her best part is yet to come.