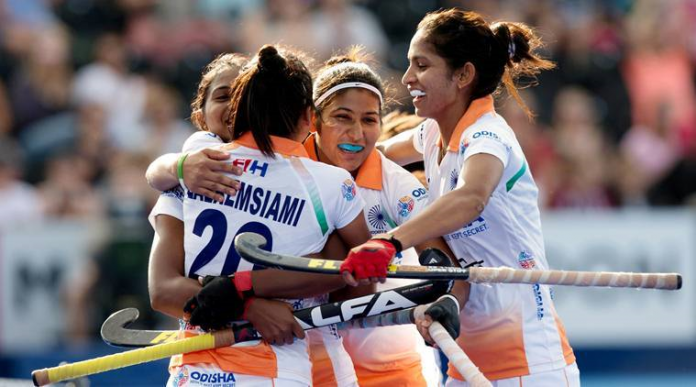 Leading from the front, Rani Rampal opened the scoring with a field goal in the 10th minute. Gurjit Kaur then converted from the penalty corner in the 21st minute to give India a 2-goal lead in the first half.

Jyoti and Lalremsiami scored two more goals in the second half to make sure Uruguay’s sole goal in the 51st minute was nothing more than a consolation goal. The 9th ranked team won the game 4-1 to grab all three points.

Courtesy a brilliant show in all the departments, the Indian Eves register a comprehensive win over Uruguay in their opening match at the FIH Women's Series Finals Hiroshima 2019.#IndiaKaGame #FIHSeriesFinals #RoadToTokyo #INDvURU pic.twitter.com/Z9rNQDsqnj

Indian Eves will now take on Poland (ranked 22nd) in their second group stage game on Sunday. Polish women also won their first game against Fiji, thrashing the islanders 6-0. The winner of this group will secure a place in the semi-final but finishing second or third will make things tricky.

The second and third placed team will face the third and the second placed team from the other group, respectively, for the place in the semi-final. The two finalists will qualify for the FIH Olympics qualifiers in October-November.

India are the favourites to win the tournament in Hiroshima and qualify for the next and final stage of the qualification for the Tokyo 2020. The Eves had to take a longer route after they missed out an opportunity for direct qualification after losing the final of the 2018 Asian Games to Japan.

Indian Men’s team have already booked a place in the FIH Olympic qualifiers after beating Japan 7-2 in the semi-final of the FIH Series Finals yesterday. The men’s team will take on South Africa in the final, late on Saturday.

Chinmay Pagar
I might be a Mechanical Engineer on the paper, but I was a Sports enthusiast since childhood, screaming at the TV watching cricket at the age of 4. Not much excites me other than sports unless it's free pizza. I can watch literally anything remotely related to sports; Cricket, Football, Tennis, F1, Hockey, Athletics, Chess, you name it! And I love to write too, so at the time I'm not watching sports, I'm writing about it. Or eating pizzas, of course.
Previous articleTop 10 Fantasy Cricket leagues in India you need to try out today
Next articleIndia vs Pakistan Dream11 Prediction | Fantasy Cricket Tips

Hockey Basics: All You Need to Know About This Sport