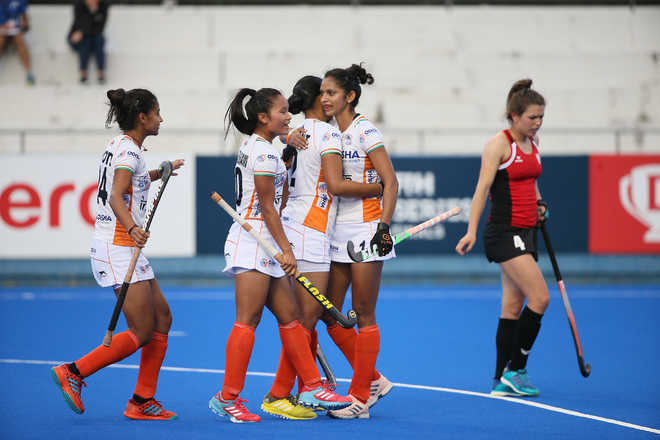 Indian Women’s Hockey team continued to dominate the FIH Series Finals with yet another win. In their second group stage game against Poland, Indian Eves destroyed the 22nd ranked team with a 5-0 victory.

After a goalless first quarter, Jyoti opened the scoring with a field goal in the 21st minute. It was her second goal of the tournament. Indian then converted two penalty corners in two minutes, with goals from Vandana Katariya and Gurjit Kaur, to end the first half 3-0.

Gurjit Kaur scored her second of the match and third of the tournament in the 35th minute when she sent the penalty stroke past Poland’s goalie. The Indian drag-flicker is now the joint top scorer of the tournament. Navneet Kaur rounded off the scoring with a goal in the 56th minute.

Indian Eves completely dominated the game in both attack and defence. Poland had absolutely no shots on target while India had 22. The Polish women were allowed only 4 entries in the circle by India’s mean defence. In the attack, Indian women had 10 penalty corners and converted two of them.

Indian women will now face Fiji on Tuesday, here in Hiroshima. Fiji women have conceded 10 goals without scoring in two games so far. India will look to cruise past the Icelanders in order to get ready for the potential semi-final clash on Saturday.

Chinmay Pagar
I might be a Mechanical Engineer on the paper, but I was a Sports enthusiast since childhood, screaming at the TV watching cricket at the age of 4. Not much excites me other than sports unless it's free pizza. I can watch literally anything remotely related to sports; Cricket, Football, Tennis, F1, Hockey, Athletics, Chess, you name it! And I love to write too, so at the time I'm not watching sports, I'm writing about it. Or eating pizzas, of course.
Previous articleHarbhajan Singh Biography: Story of India’s Spinning Poster Boy
Next articleHow to become a cricketer and make it your career in India