Indian sports stars back PV Sindhu and urged media to stop focussing on her defeats.

Rohan Bopanna, the star tennis player of India, said “While covering news,  keep in mind the sentiment of the sportsman who themselves are far from ecstatic to lose in the finals. If anything it already is more frustrating to lose to further be discredited”

What we do today can improve all our thoughts tomorrow. #justmythought #PVSindhu pic.twitter.com/vKjd9VPdGp 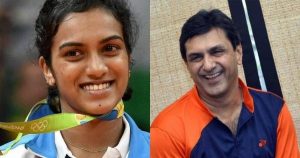 Prakash Padukone, the legend of Indian Badminton, has insisted that PV Sindhu does not have any mental block and such comments would only be going to put her under pressure.

Last Sunday, Sindhu lost the world championship final to Carolina Marin of Spain. This was her third major final defeat after the Worlds final last year and the title clash of 2016 Rio Olympics.

A year ago, she was a runner-up in the Superseries Finals in Dubai too.

“It is quite creditable that she reached the final again. The competition is very tough. She should aim for the gold next time. She beat two Japanese players (Okuhara and Yamaguchi) against whom she normally loses. Unfortunate that she could not do the same in the final,” said Padukone during the ongoing Junior Badminton Championship.

When asked whether she had a mental block, Prakash said “There is nothing like that. She is still young, she will definitely win (the world championship) in near future. She is already one the greatest players from India.”

“We should not put too much pressure on her when she is doing well. She is world number three. The focus should be on how we can make her win rather than why she is losing the final again and again. If we keep doing that, she would only feel more pressure.”

Pullela Gopichand, the national coach, is considered to be the engine of creating world-class players like Sindhu, Saina and Kidambi Srikanth.

With the over-burden of such great players now, Padukone feels that Gopichand needs support.

“Gopi is doing a good job. He needs somebody with him to assist him. There are so many good players. For one coach to take care of so many players, it would be difficult,” said the All England Championship winner.

We at KreedOn believe that as media, we have a responsibility. A responsibility to report facts and if a hero is defeated representing the nation, one should not reduce to comments like below if not motivate them for the future. How do they even know that she is very frustrated?

KreedOn Network
We are a team of sports writers who research about sports in India day in day out. Please reach out to us in case of any specific requirement of digital services on [email protected] .
Previous article
Jinson Johnson – A medal hope for India after 42 years
Next article
Wrestler Sushil Kumar: The Rise and fall of a Champion