Indians at the Track Asia Cup

Indian cyclists made the country proud by winning 13 medals, 6 of them gold, at the recently concluded Track Asia Cup. India dominated the competition over all the three days. However, Indonesia came next after India with a medal tally of 4 gold and 3 silver. 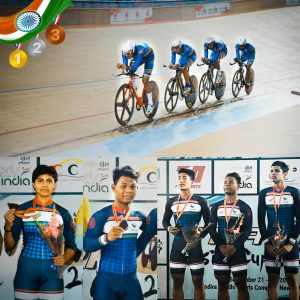 Esow Alben, the 17-year-old wonderkid, was instrumental in winning a gold in the 200m sprint event. Another gold came in the women’s junior 200m sprint.  clocked 12.263s to grab the pole position. She also thanked her coach R K Sharma for the victory. Chaoba Devi won India’s third gold in the Women’s 3km elite event.

Indira Gandhi Velodrome hosted the fifth Track Asia Cup event. The three-day event saw participation from 10 other countries, including Bangladesh, Malaysia, Thailand. India’s good display in the tournament was benefited by the absence of regional powers  China and South Korea.

“It was a tough fight with Kazakhstan’s rider but I was confident that I would win the gold medal,” said a jubilant Alben.

The gold was a fitting comeback for the 17-year-old youngster, after the Asiad sprint cycling disappointment. He crashed out of the pre-quarters after the defeat to South Korea’s Chaebin Im.

A native of Andaman and Nicobar, the teenager has always shown a pedigree to perform at the highest level. Apart from the above, he also won at the Cottbuser Sprint Cup 2, GP Brno Track Cycling competitions. As a result of these impressive victories, he earned the No.1 ranking in the Junior Sprint category. He is the first and the only Indian to reach the top spot.

Alben initially wanted to pursue rowing. But owing to his low height, he later took up cycling.

The Track Asian Cup is a UCI (International Cycle Union) Class I accredited competition. It is also a qualifying tournament for the World Cup, World Championship and the 2020 Tokyo Olympics.

After winning the gold medal, Mayuri said, “There was no pressure on me and I enjoyed the race. This is a good exposure for us, I’m thankful to CFI for organizing this regularly.”

Mayuri reflected the Cycling Federation of India secretary-general Onkar Singh views on the impact of such events on India’s budding cycling scenario. “This is a build-up event for Indian cyclists to ensure they can compete with Asia’s best and get enough exposure for future events,” he said before the event.

Monish Gadiya
Monish Gadiya is the Head of Content at KreedOn. He is a thorough tech-enthusiast and believes that innovation is the answer to all the problems prevalent in the society. Monish graduated from University of Pune with a degree in Civil Engineering before pursuing a post-graduate diploma course in intellectual property rights. A die-hard football fan, he has represented his college at various football competitions.
Previous article
Tycoons of Tomorrow: PV Sindhu the only Indian athlete among 22 young leaders
Next article
Saina Nehwal to Marry Shuttler Beau Parupalli Kashyap

The Older, The Better: These Elderly Athletes Prove that Age is...