One of India’s leading athlete who outperformed his opponents at the recently concluded Commonwealth Games, pugilist Vikas Krishan Yadav is of the view that Indian boxers will repeat their historic performance at the upcoming Asian Games in Jakarta. The young, 18 year old boxer from Haryana, made into headlines when we won the gold medal at the 2010 Asian games. He had showed his valor much before that when he won a series of International medals at the Junior cricuit.

Indian Boxers are on a Roll

While talking to the media he was enthralled and praised his team mates for their performance at the recently concluded 2018 goldcoast Commonwealth. The gold medal winner and a rising star Vikas Krishan showed confidence that the Indian pugilists will improve their medal tally at the Asian Games 2018 , to be held in Jakarta in August 2018.

The 2018 Commonwealth Games in Gold Coast, Australia, earlier this month, was a huge success for Indian boxers. We won nine boxing medals in total with both men and women boxers performing brilliantly. We had sent eight boxers in the men’s categories, who made us proud by finishing on the podium. The five-time world champion M.C. Mary Kom created history when she helped India win its first ever gold medal in the women’s 48 kg category.

Vikas believes that the standard of the game would be much tougher at the Asian Games 2018 than what they faced at the commonwealth games. Still the star pugilist showed no lack of confidence. He is sure that that Indian boxers will give the Asian countries a good fight for their medals and will win us more medals than the 2014 edition of the games.

“There is no comparison between the Commonwealth Games and the Asian Games. The Asiad is like a mini Olympics. Countries like Thailand, South Korea, Japan, Philippines, Mongolia, China and former Soviet nations like Kazakhstan, Uzbekistan and Turkmenistan are among the stronger nations in world boxing. The Asian Games is going to be much tougher. We will not get such easy competition like the Commonwealth Games,” Vikas told news agency IANS.

“But still we should improve our medal haul at the Asian Games, including at least one gold. Last time we got just two medals when Satish and I got bronzes in our respective categories. This time we should get four to five medals,” he added.

Indian Boxers and the room for improvement 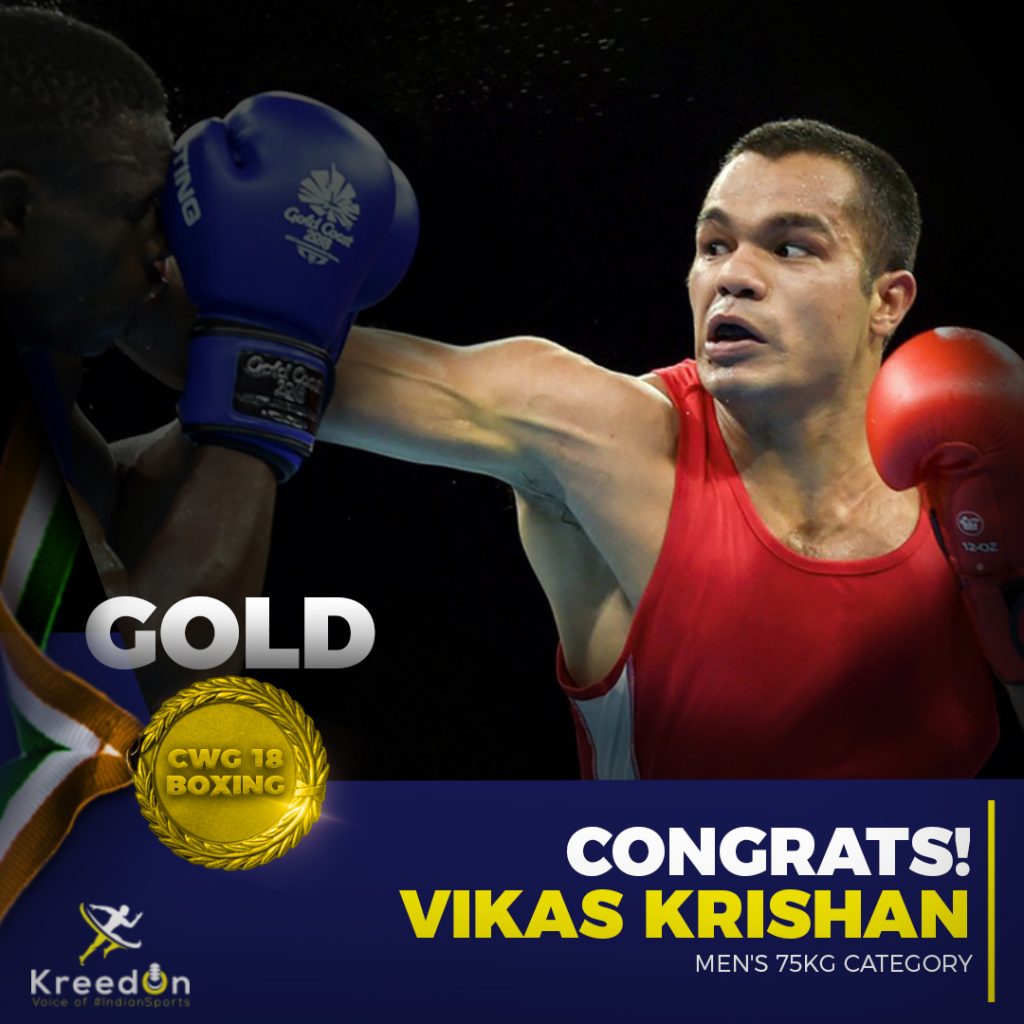 The 26-year-old boxer feels that the performance of the 8 boxers in commonwealth games which lead them all into the semi-finals of their respective categories, shows the level of our game. He say ig the pugilists keep showing the same grit, then we are definite to have more number of gold medals in the Asian Games 2018.

Gaurav Solanki, who rose upto the occasion and won a gold in the flyweight (52kg) division, was the only Indian apart from Vikas to win top honor among the men’s team. When Vijender Singh, glamorized the sport in the country, no one would have thought that we had more champions coming in. The squad for the Asiads is ready and has names who have been striving hard for the very day.

According to Vikas the overall performance of our boxers was good. But at the same time we could have converted silver medals into gold. As Manish Kaushik, Amit Phangal and Satish Kumar all lost in their final but with very small margins. We need to convert these type of close finals into victories. The bouts that got us gold medal were won with a huge lead of 5:0. While the bouts where we could not get the gold were as close as 3:2. These figures themselves say a lot about the high standard of game that we showed at the grand stage. We just need to continue the momentum.

At the same time Vikas feels that the competition he faced during his journey for the gold in Gold Coast, was not challenging enough for him and he is ready to take up the tougher opponents in the Asiads 2018.  The pugilist won the medal in the middleweight (75kg) category, and this was his maiden title at CWG

“It was not tough for me at all. Everybody was saying that I had a very tough draw, but I did not face too much of a challenge. I had a bit of a trouble in the quarter-finals, but after that I beat three Olympians from the 2016 Rio Games one after the other,” the Indian Army boxer said.

“Fighting three Olympians in consecutive bouts is not an easy task. But I registered one-sided victories in each of those bouts,” he added.

We hope the young man will prove true his words and will show us a performance to remember along with his team mates.  The Asiad are all set to begin

KreedOn Network
We are a team of sports writers who research about sports in India day in day out. Please reach out to us in case of any specific requirement of digital services on [email protected] .
Previous article
Manika Batra Table Tennis Profile – The Rise of India’s 1st TT Superstar
Next article
This is the beginning of good times for women’s cricket – Mithali Raj

Arundhati Choudhary is happy with the growth of girl boxers in...