A reporter asked a champion Indian Boxer Manoj Kumar “Didn’t you feel like giving up because of the hardships you faced?”

He says “Not even for a fleeting second. Never. It’s a lot of fun proving people wrong, I feel good about myself now. I have managed whatever I have without the backing of anybody apart from my coach and elder brother Rajesh.”

30 years ago, in a family of Rajound village (Kaithal district, Haryana) a boy was born named Manoj Kumar, the youngest amongst three brothers. His mother managed the household and father was in the Indian Army who is retired now. Though he was an athlete himself, he got his inspiration from his brother Rajesh Kumar Rajound who was a great Indian boxer too. When Rajesh swept the University Championship with a gold medal, he was expected to get selected for the national team, but he was ignored. That’s when he decided to train his younger brother Manoj for boxing and insisted the other brother, Mukesh to switch from Judo to Boxing as a sparring partner of Manoj. All three then  started traveling to the nearby district, Kaithal to train well.

Monoj Kumar – The never give up spirit

The moment of glory struck during 2008 when Manoj Kumar became the National champion after beating the defending Champion Som Bahadur Pun. He rode on his form and earned a gold medal in the 2010 Commonwealth Games. He got medals in many Asian Championships including a gold recently in South Asian Games, 2016, Guwahati.

In RIO Olympics 2016, his first match in 64-KG welterweight category was against a two-time Olympic bronze medalist, Evaldas Petrauskas of Lithuania. After a grueling fight which lasted till the final round, Manoj clinched the match by 2-1 with a beautiful combination of punches and jabs mixed with a great display of defense. Manoj was awarded Arjuna award by the Government of India in 2014. Earning the award for his legendary performance should have been natural and easy but he had to struggle and fight a legal petition against the selection committee. Later, Delhi High Court looked into the facts and directed the government to honor  him with the award.

Manoj Kumar – Promises are yet to be met 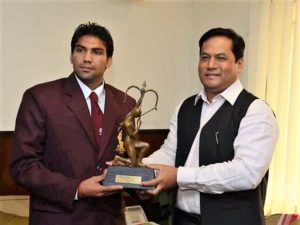 After his 2010 Commonwealth Games Gold medal Manoj, A Class III employee in the Indian Railways was promised a promotion by  “Mamata Banerjee”, Union Railway Minister that time. Since that promise, seven ministers have come and gone but the situation remains the same. He has written to a lot of sponsors but perhaps, nobody thought he could make it this far. So, there was no response.  But he couldn’t have backed down due to these failures. Not him.

“I have Maratha roots and I am inspired by the great Shivaji. I draw my strength from his beliefs, that’s what makes me so stubborn. And it is this stubbornness which helped me fight the circumstances,” says the young boxer.

This is not the end, he wants to give much more to the sport. He runs a boxing academy in his name along with his brother in Kurukshetra, Haryana. The academy trains anyone who has the dedication and seriousness to pursue boxing as a career choice. The fees for the training is as low as INR 1500/month. The academy is committed to start a new revolution of boxing in India. They provide world class training to the young boxers.

We thank Manoj who is putting all his efforts for the betterment of the sport and wish him all the best.

For more such sports stories in your inbox, please don’t forget to subscribe 🙂

KreedOn Network
We are a team of sports writers who research about sports in India day in day out. Please reach out to us in case of any specific requirement of digital services on contact@kreedon.com .
Previous articleVirender Singh – Goonga Pehelwan
Next articleRehan Poncha Olympian Indian Swimmer Profile, Information

HOW TO BECOME A CRICKET UMPIRE IN INDIA? Know what qualifications...

Drones in sports: Evolution of sports through digital eyes

What is iGaming? Future of i Gaming in India – Prospects...

This Platform Will Change the Future of Indian Professional Boxing

The Older, The Better: These Elderly Athletes Prove that Age is...