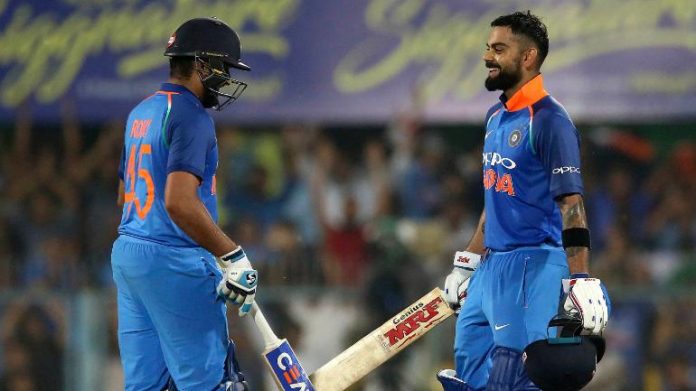 “You never know what is par score for teams like India,” said West Indies’ fast bowler Jason Holder, reflecting how India made the total of 322 looks so small. It was two of the most in-form batsmen, Virat Kohli and Rohit Sharma, who put up a breathtaking 246 run partnership and quite single-handedly guided India to thumping 8-wicket win. Their batting masterclass was on full display, as they partnered for India’s record ODI partnership playing second.

Agreed, the pitch was batting friendly. Agreed, the bowling was below-par and inexperienced. But you just cannot ignore the ease with which both the players struck shot after shot.

West Indies started the match brightly after being asked to bat first by Indians. After Hemraj Chanderpaul went out cheaply for 9 runs, it was Kieran Powell and Shai Hope who steadied WI’s boat. The former struck a valuable half-century and helped the team to reach 84-1 from 19-1. After that, WI lost 2 wickets of Hope and Samuels in quick succession, with the latter going out on for a duck.

The responsibility no rested on a young Shimron Hetmyer. And the 21-year-old did live up to the promise shown in him as he played some amazing shots. His blitzkrieg shots and pulls were tough for Indian bowlers to handle. Hetmyer struck a century in no time, hitting 6 boundaries and 6 sixes in the process.

With his help, WI managed to put up a formidable total of 322/8, especially considering the fact that Chris Gayle and other senior batsmen were absent from the team.

India’s start to the second innings was sort of uneventful. Shikhar Dhawan was sent back to the pavilion by another debutant, Oshane Thomas, for just four runs. Though ultimately, that proved to be anything but a small hiccup for the Indians.

As Kohli came on the crease, the score stood 10/1. The pair started off on a steady note, looking to build a good partnership. In no time, they put back the balance in the side.

They orchestrated the chase with such ease as if they have been doing it for decades. Confidence oozed with each shot, and there was not a single moment in the match when the fans in the stadium felt out of place or uneasy.

Captain Holder did all he could to break the growing partnership but in vain. He changed 6 bowlers, also gave rookie Chanderpaul an over, but nothing seemed to separate partnership. It was Sharma who first struck the century, soon followed by his captain, Kohli. They went on to add 246 runs between them, a record partnership for India in a chase. It felt as though they would see off the rest of the match.

But then, in a rare event, Kohli was stumped by wicketkeeper Hope on a delivery by Bishoo. He was at 140. By then, though, it was too late, as India were sailing to another easy win.

The new man. Ambati Rayudu gave an able support to the Hitman, Rohit Sharma, as he struck a stunning 157* by the end. It was a record 6th ODI 150+ score, surpassing an earlier record held jointly by Master Blaster Sachin Tendulkar and Aussie opener David Warner. He reached that total in just 117 balls, with a strike rate of 130.

Mamta Thatte
A passionate foodie, a versatile writer, and now a sports enthusiast, Mamta is always open to exploring new avenues. She has a vast experience in Web Content Writing, Editing, and Social Media Management. A self-confessed coffee and dark chocolate addict, she believes in following her heart and giving her 100% into everything she does.
Previous articleIndia vs Japan: India thrashes Japan 9-0 at the Asian Champions Trophy
Next articlePro Kabaddi League 2018: Dabang Delhi defeats The Bengal Warriors 39-30

How to get perfect abs? Virat Kohli shows the technique [Video...

India vs New Zealand Series: What did we Learn From the...