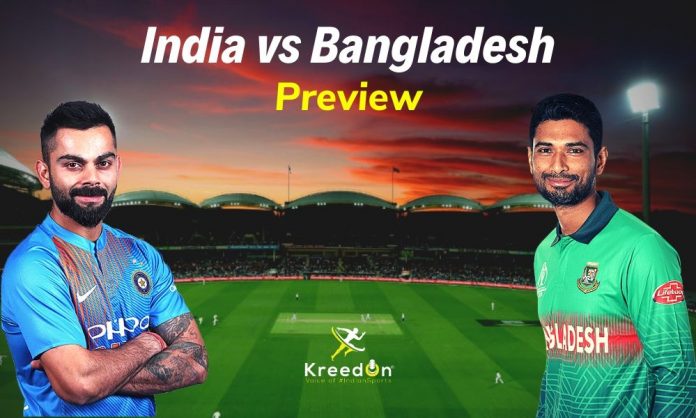 India will welcome Bangladesh for a 3-game T20I series followed by a 2-game Test series starting from 3rd November. The series comes at the back of a successful Test-series demolition of South Africa by the Indian team. The hosts registered a clean sweep against the Proteas winning the series by 3-0. It is, however, the nature of the victories that is impressive. India won by significant margins, including two by innings.

Bangladesh’s record against the Men in Blue has been poor, to say the least. The Tigers have yet to win in both the formats against India. Of their 8 prior T20I meetings, India have on every single occasion. In the game’s longer format, India have won on seven of the nine times, with the two ending in draws. With the kind of momentum they have and their impeccable record against Bangladesh, India are the undoubted favourites to win the two series.

The biggest story of India vs Bangladesh series has to be the two-year ban (one year suspended) on veteran all-rounder and Bangla skipper Shakib Al Hassan by the International Cricket Council (ICC).

The 32-year-old admitted of his failures to report about the corrupt approaches he received.

This will be a rude shock to the Bangladesh Cricket, especially after Shakib’s heroics in the ICC Cricket World Cup earlier this year.

In absence, however, Mahmadullah will don the captain’s armband for the T20I while Mominul Haque will be the skipper for the Test series.

As for India, Rohit Sharma will lead the hosts in the shorter format of the series with Virat Kohli been rested for the T20I leg. Kohli will be the Test captain nonetheless.

This may be a surprising development, though, since the Indian cricketers have, in the past, opposed to playing with the pink ball, citing visibility issues as a reason as the ball gets old. “It’s a good development. Test cricket needs this push. I and my team were bent on it and thanks to Virat (Kohli) also, he agreed,” Ganguly said.

The legendary Eden Garden will get the honour of hosting this Test between November 22-26.

The India vs Bangladesh series will be broadcast live on Star Sports in India, Bangladesh, Maldives, Sri Lanka, and Nepal. It can also be viewed for free on DD Nation in India. Hotstar will also stream the series live in the Indian subcontinent.

KreedOn Network
We are a team of sports writers who research about sports in India day in day out. Please reach out to us in case of any specific requirement of digital services on [email protected] .
Previous articleU-23 World C’ships: Indian wrestler proceeds to bronze-winning match
Next articleX1 Racing League 2019 | Schedule | Teams and Drivers Venues