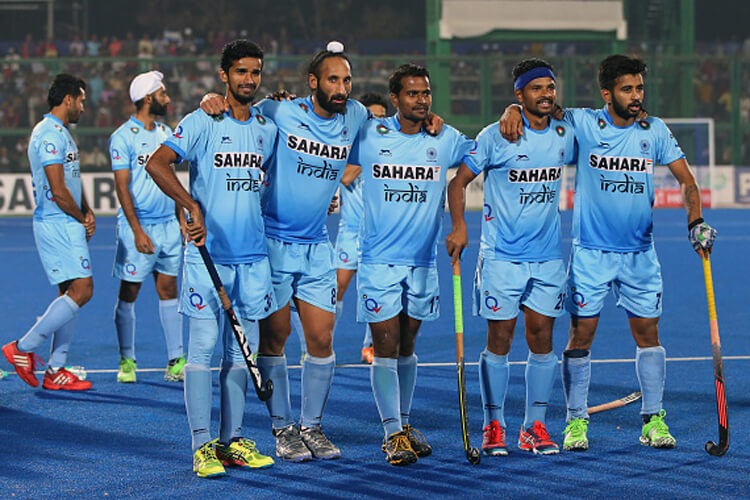 We are less than two weeks away before the finals of the 2016-17 Hockey World League commence in Bhubaneswar. Hosts India have already qualified for the finals and they will be joined by seven teams who advanced from the semi-final round. They are Australia, Belgium, Germany, New Zealand, Spain, Argentina and Netherlands.

The Hockey World League is a tournament incepted by the International Hockey Federation in 2012 which is held over two years and also serves as the qualifying tournament for the hockey World Cup and the Olympics. The Hockey World League consists of four rounds- Round 1, Round 2, semi-finals and the final round. The teams ranked from 1st to 11th receive a bye to the semi-finals while the teams ranked from 12th to 19th receive a bye to the second round. The remaining teams play in the first round.

For this year’s World Cup, since the format has been expanded from 12 to 16 teams, the top 12 ranked teams from the semi-final round of the Hockey World League will reach the World Cup. However, if some of these 12 teams have already qualified for the World Cup through the continental championships, then the next highest ranked team will qualify for the World Cup.

As far as the Olympic qualification is concerned, the top 6 teams from the Hockey World League semi-finals apart from the host nation or continental champions qualify for the Olympics.

First held in 2012, the 2016-17 season will be the third season of the Hockey World League. Let’s take a look at India’s performances in each season and what we can expect from the Indian players from this edition’s World Hockey League.

During the inaugural edition of the Hockey World League, 54 nations took part and out of these 54 nations, the top 8 ranked teams received a bye to the semi-final round while the teams ranked from 9th to 16th received a bye to the second round. India were ranked 9th so they automatically qualified to the second round. The second round consisted of a total of 24 nations and was held in four cities, namely, Delhi, Rio, Paris and Moscow. All 24 teams were divided into 4 pools of 6 teams each with the top two teams from each group qualifying for the semi-final round.

India’s Round 2 pool consisted of Ireland, Bangladesh, China, Oman and Fiji. They hosted the matches of their pool.

India began their campaign with a 16-0 drubbing of Fiji thanks to two hat-tricks by V.R. Raghunath and Danish Mujtaba amongst other goals. India’s prolific goal-scoring continued as they then thrashed Oman 9-1 before facing their first and only close contest of the pool against Ireland which they won 3-2. India won their final two pool games against China and Bangladesh by 4-0 and 5-1 respectively. They qualified for the semi-finals by winning their group and with a goal-difference of +33.

Rotterdam and Johor Bahru in Malaysia were the venues for the semi-final round. Each venue had two pools of four teams each. India would play their matches at Rotterdam and their pool consisted of hosts Netherlands, New Zealand and Ireland. India began their campaign with a 4-4 draw against the Irish. They then lost 2-0 to the Dutch. India ended their pool stage by drawing 3-3 against New Zealand and ended their group in third place.

In the quarter-finals, India faced Australia and lost 5-1. India would next play in the 5th-8th place classification. India technically ended the semi-final round in 6th place after beating France 6-2 before losing to Spain on penalties. However, due to the fact that New Delhi would host the final, India qualified for the final round.

The final had a total of eight teams who were drawn into two pools of four. Based on the pool results, the teams would play a knockout stage determining the winner. India’s group comprised England, Germany and New Zealand. India played England in their first match and lost 2-0. India lost their next match too, against New Zealand by 3-1. However, they managed to salvage a 3-3 draw against Germany in their final pool game.

In the quarter-finals, India played Australia and lost 5-1. India would next play in the 5th-8th place classification, India had an exciting match against Germany where they edged them out 5-4 to reach the 5th-6th place play-off. Here, India lost to Belgium 2-1 and ended the inaugural edition of the Hockey World League in 6th position.

At the 2014-15 Hockey World League, there was a little change in format as the top 11 teams in the FIH rankings would receive automatic qualification to the semi-finals. Luckily, India’s ranking was 11th at the time so they were through to the semi-finals.

India played their pool matches in Antwerp and their group consisted of Australia, Pakistan, France and Poland. The Indian team began their campaign by defeating France 3-2 following which, they defeated Poland 3-0. India tied 2-2 against Pakistan before losing 6-2 to Australia in their final pool game. India ended their pool in second place.

The final round was held at Raipur and the eight qualified teams were pooled into two groups of four who would later play in the quarter-finals. India had a pretty tough group with Netherlands, Argentina and Germany in their group.

India could only secure one point and that was against Germany as they lost to Netherlands and Argentina 3-1 and 3-0 respectively. In the quarter-finals, India faced Great Britain who had beaten them 5-1 in the semi-finals. However, the Indian team turned the tables this time by defeating the British 2-1 thanks to goals from V.R. Raghunath and Talwinder Singh. In the semi-finals, India lost to Belgium 1-0 and it was the end of the tournament for them.

However, India ended their tournament on a high by defeating Netherlands in the third place play-off in what is probably the greatest match in the history of the World Hockey League. The Dutch took a 2-0 lead but India came back to lead 3-2. The scores were 5-5 in the end and penalties would decide the fate of the match. India won the shootout 3-2 and ended the 2014-15 Hockey World League in 3rd place.

7th-ranked India reached the semi-finals as one of the top 11 ranked teams in the world. The semi-finals format was the same as that of the 2014-15 Hockey World League. The two cities that would host the semi-finals were London and Johannesburg.

India would play their matches in London and their group had Netherlands, Canada, Pakistan and Scotland. The Indian team began by winning against Scotland and Canada 4-1 and 3-0 respectively. India then thrashed Pakistan 7-1 before losing their final game against Netherlands by 3-1. In the quarter-finals, India lost to Malaysia 3-2. As a result, they played in the 5th-8th classification. Here, India once again bashed Pakistan, beating them 6-1 but they lost to Canada in the 5th place play-off. However, due to the fact that India would be hosting the final, they qualified to the final round. As a result, Malaysia were out.

Final round and India’s chances

Bhubaneswar will host the final round from December 1 and India’s pool consists of England, Germany and Australia. England are ranked below India currently but they always pose a threat to any opponent. Germany and Australia need to definition as to how mighty they are.

India had a disappointing semi-final round where they lost to Malaysia and Canada, both of whom are teams who India could have easily won against. India came third at the Sultan Azlan Shah Cup but they won the Asia Cup at Dhaka last month.

The Indian side are in a field of three very strong teams. However, you cannot write off India as they have a strong team themselves. Coach Sjoerd Marijne has gone for a young team for the final round as he has left out team skipper and experienced player Sardar Singh out of the squad. The likes of Rupinder Pal Singh and Harmanpreet Singh in the defense will certainly make it difficult for the opposition players to score goals.

India also have a strong set of forwards in Mandeep Singh, S.V. Sunil and Akashdeep Singh. However, a lot of eyes will be on Harmanpreet Singh. He has been one of India’s star players this year and will probably be India’s talisman when they enter into the competition. Nevertheless, India will be expected to put up a good show and like their coach Sjoerd Marijne said, “Hockey World League will show where India stands”. This tournament will definitely be a warm-up tournament ahead of next year’s World Cup.

Neelabhra roy
Reading, Writing and indulging in sports activities have been Neel's passion since he was a child. He grew up playing various sports and knew that it was something he wanted to stay in touch with. After completing his graduation, he narrowed his focus on writing. In his leisure time, he likes to read books and chill with his dog.
Previous article
Commonwealth Wrestling Championship: It’s a Medal fest for Team India’s Wrestlers
Next article
Tracing the journeys of Kuldeep Yadav and Yuzvendra Chahal