Indian Cricket Team: The Rise of Cricket In India. Past to Present

The Indian Cricket Team is creating waves with their sublime performance in Australia, England, and at many other places away from the home soil. The success is special considering that the Indian cricket team has been traditionally much stronger at home than abroad. As the Men in Blue prepare for the World Test Championship (WTC) in England, we take a dip into the history book to have a look at the evolution of cricket in India.

History of Cricket In India

First Exposure of Cricket In India

The first British ships set arrived in India over two centuries after Vasco da Gama first discovered the sea route from Europe to India in 1498. Off the coast of Kutch, the new foreigners would indulge in recreational activities that attracted curious reactions and interest from the onlookers.

“Every day we diverted ourselves with playing cricket and other exercises,” one of those sailors by the name Downing recalled his time in India in his memoirs. This is the earliest documented reference to cricket in India. The first documented match hosted in India was as early as 1751 when the British army played against the English settlers.

With the so-called merchants turning rulers over time the dispersion of the sport only intensified. This was established when the Calcutta Cricket Club (what we know today as CC & FC) was instituted in 1792. Historically speaking, this was to be the second cricket club in the world, after the MCC that was established in 1787.

READ |Types of Bowling in Cricket: A to Z guide for fast and spin bowling

The CCC, as it was popularly known back then, organized a competitive match between its team and the Old Etonians. The game went on to witness a solid century by Robert Vansittart of the visiting team – the first documented century on the Indian soil.
Among the first Indians to play cricket were naturally the members of the Indian army, or ‘sepoys’ as they were known. They knew the basic rules, having continuously witnessed the senior army men play the sport in their leisure time. This provided the 1st exposure to cricket in India.

Cricket in India: The Contribution of Parsi’s

The Parsi community was the pioneer when it came to accepting the sport, having first set up the Oriental Cricket Club in Mumbai in the year 1848, followed by Young Zoroastrians Club two years later.

Apart from that, the evolving metropolis of Mumbai also witnessed the establishment of some other cricketing clubs like the Hindu Gymkhana and the Bombay Gymkhana. Nonetheless, it was the Parsis who contributed the most to the development of the sport in India. Being economically stable, they were one of the first to send their own team to England. One player from the team who deserves special mention here was the round-arm bowler Dr. Mehellasha Pavri. He managed to take 170 wickets in the two England tours by the team.

Having had a second successful outing in England, the British sent a team to India in 1889 to play a game against the Parsis, along with others against the English Indian cricket team in India.
It was in this match that the G.F. Vernon-led British side suffered a 4-wicket defeat to the Parsis, the first such defeat for the British on Indian soil.

Seeing the progress made by the (English) Indian cricket team, Lord Harris, the then Governor of the Bombay Province, did his bit to further develop cricket in India.

He not only arranged for an annual Presidency match between the Parsis and the Europeans but also earmarked land on the Mumbai seafront to set up the famed Gymkhanas and Maidans.

The year 1911 saw an ‘All-Indian Cricket Team’ go on their first-ever tour of England. The team featured some of the best cricketers of the time. These included some stalwarts like Baloo Palwankar, C.K. Nayudu, Prof. DB Deodhar, Wazir Ali, JG Navale, and Colonel Mistry among others.

Cricket In India: Formation of BCCI & the 1st International Match

In 1928, the Board of Control for Cricket in India was established with Grant Govan being the first President while Anthony De Mello the first Secretary.

The city’s long-standing history and tryst with the sport led to Bombay being adjudged as the base of this newly formed organization. Four years later, India officially became become a Test-playing nation in 1932.

The inaugural Test was played at Lord’s in 1932 with Col. C.K. Nayudu being awarded the honor of becoming India’s first Test captain.

The Indian Cricket Team had to wait for over two decades from 1932 to 1952 to open its account in Test cricket. It was in the fifth and final Test of the 1951-52 England tour of India series at Chennai that the Indian cricket team won by an innings and eight runs. A series win soon followed in 1953, when the Indian cricketers defeated fierce rivals Pakistan.

India’s first Test series win abroad came in 1967-68, when the New Zealanders were beaten 3-1 on their own pitches. 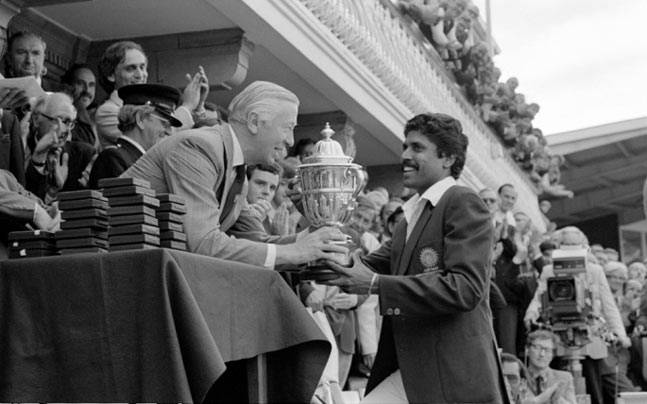 Odds of 66/1, just 1 World Cup win to show for in 6 matches. Those were the harsh stats with which the Indian cricket team was setting foot on the English soil.
Fast forward to the Knockout stages, and India was very well punching above their weights.

They had somehow managed to finish second in the Group Stage above Australia. In the semi-finals, they were to face the hosts England at Old Trafford.

England went on to make a competitive total of 217 after deciding to bat first. Kapil Dev (3/35), Mohinder Amarnath (2/27), and Roger Binny were the stars for the bowling side in the first innings. A good start from Yashpal Sharma (61) and Sandeep Patil (51) helped India defeat its former rulers by 6 wickets. Mohinder Amarnath became the man of the match.

The epic finale was going to be played at the Lord’s against the competition’s firm favorites, the West Indies. India could manage only 183 runs in the first innings. A total perceived by everyone as achievable especially since WI boasted of some of the most talented batsmen like Clive Lloyd and Viv Richards.

However, an able captaincy by Kapil Dev and exceptional bowling by Mohinder Amarnath (3/12) and Madan Lal (3/31) led India to its first-ever World Cup win.
The win had deep repercussions in the world of cricket. It had not only put India but the Indian subcontinent at the center of the cricket map. Other Asian teams like Sri Lanka and Pakistan would soon go on to clinch the elated trophy in the following years.

The popularity of Cricket in India increased manifolds. It was the first time that anyone had considered staging the competition outside England, its birthplace.

When Kapil Dev was lifting the 1983 Prudential Cup, a boy got inspired somewhere in the Mumbai suburbs. That 10-year-old would go on to not only be India’s best player to ever grace the sport, but also the torchbearer of Cricket globally. This was Sachin Tendulkar.

Tendulkar began his Ranji Trophy career on November 14, 1987. Unfortunately, he was just a substitute then. He made his actual debut in December 1988, the next season. He made 100 not out in his very first match. The glimpse of his extremely bright future was visible to everyone as he finished the season with 583 runs at an average of 67.77, becoming the highest run-scorer for Bombay. Tendulkar has scored centuries in all his three domestic tournament debuts- Ranji, Irani, and Duleep Trophies.

In the year 1989, Tendulkar made his Test and ODI debut against Pakistan. In doing so, he became the youngest player to debut for India in both formats. Steadily, he became a dependable fixture in the team and rose through the ranks. Tendulkar was the highest run-scorer at the 1996 World Cup for the Indian Cricket team. He was the Man of the Tournament at the 2003 World Cup as well.

One of the best Cricket players in the history of the game, Sachin Tendulkar never found much success as a captain. Hence, he decided to stay away from captaincy. He had some ups and downs in his performances throughout his long career. However, he always bounced back stronger.

After the high of the 2004 World Cup, the Indian Cricket Team was regarded as a firm favorite in the 2007 edition of the cricket extravaganza. India boasted of what is considered as their golden generation of batsman- Sachin Tendulkar, Rahul Dravid, Sourav Ganguly, Virender Sehwag, and VVS Laxman among others. However, what followed was one of the most disappointing cricketing displays by the Men in Blue. They failed to even make it to the knockout stages of the competition.

One man held responsible for the mega upset was Greg Chappell, the former Indian coach.  That span also witnessed some ugly spas between him and the then captain Sourav Ganguly and Rahul Dravid.

READ |11 Famous brothers in cricket history who glorified the game

Indian cricket team ushered into a new light when the selectors took a bold step of giving reigns to a relatively inexperienced Jharkhand wicketkeeper- MS Dhoni.

The results were instant. Under his stewardship and Gary Kristen experienced coaching, the Indian cricket team would go on to win the inaugural World T20, the 2011 World Cup under his leadership apart from the No 1 spot in the Test cricket.

READ |10 Shortest cricketer: You will be shocked to know the topper!

Sourav Ganguly takes his shirt off At Lord’s, after India’s historic triumph in Natwest Final 2002

Sachin Tendulkar became the 1st man on the planet to score a double century in ODI at Gwalior against S.A

For interesting content on Indian Sports, stay tuned with KreedOn.

Monish Gadiya
Monish Gadiya is the Head of Content at KreedOn. He is a thorough tech-enthusiast and believes that innovation is the answer to all the problems prevalent in the society. Monish graduated from University of Pune with a degree in Civil Engineering before pursuing a post-graduate diploma course in intellectual property rights. A die-hard football fan, he has represented his college at various football competitions.
Previous article
Sachin Tendulkar Biography: Movie | Age | Net Worth | Records | Centuries
Next article
PBL 4: Awadhe Warriors Win Big Against Ahmedabad Smash Masters

Sachin Tendulkar gives a sneak peek at his learning kayaking in...