A spectacular win by the Indian football team over Hong Kong for the first time in 29 years came with a sensational 4-0 score at Salt Lake Stadium, Kolkata. Blue Tigers moved to the top spot on the GROUP D table with 9 points.

India already qualified for AFC Asian Cup 2023 after Palestine defeated the Philippines by 4-0 yesterday in a Group B match. This is India’s successive appearance in the finals for the first time ever and the fifth time in the history of Indian Football. 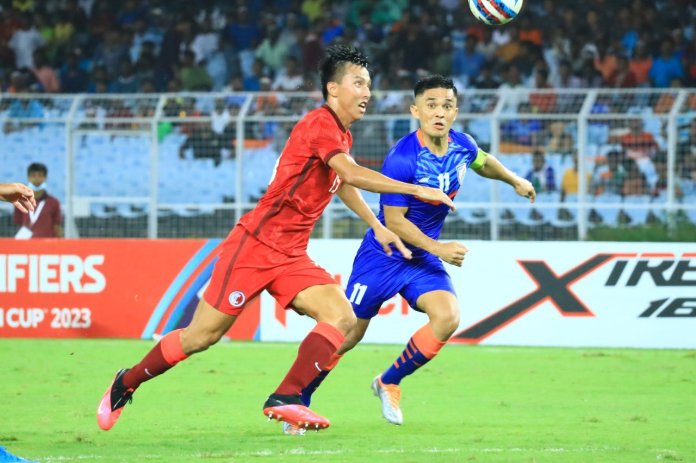 Sunil Chhetri kicks off the match and spearheaded the India attack line. In the second minute, Anwar Ali calmly netted the ball from the penalty spot and opened the score for India. Suresh was shown a yellow card in the ninth minute for committing a foul on Hong Kong’s Wong Wai.

Seconds before halftime, Chhetri got the ball from the left, smashed it into the net, and scored an outstanding goal. After this match, Sunil has 84 international goals, equalizing with Ferenc Puskas in lower games.

Yesterday, India’s defense was top-notch as they secured a clean sheet. Gurpreet made some impressive saves at the goal line. Manvir Singh scored a goal from the penalty box in the 85th minute. Ishan Pandita, substituted in (82′) and scored a tremendous goal and led India it’s the fourth goal during injury time.

“The kind of form we are in, it will be great to pay here. Very satisfied with the performance of the team. Happy that we got nine points from three games. Feels good. The last one is past and we want to do the best and it is paramount for us that we keep performing at the Asia level”.