Tokyo Olympics: India competed across 6 sports on day 5. The day started off well with Indian shooters Manu Bhaker, Saurabh Chaudhary topped their mixed team air pistol qualification Stage 1. The Hockey team came back up and defeated Spain 3-0. Meanwhile, boxer Lovlina Borgohain advanced to the quarterfinals and is one step away from winning a medal.

The men in blue came back strong after the defeat to Australia. They beat Spain 3-0 in a dominant performance in Men’s hockey.

Indian Hockey team is placed 2nd in Pool A after 3 matches. They will face Argentina next on July 29.

Indian boxer Lovlina Borgohain defeated Nadine Apetz of Germany 3-2 in an intense bout in the round of 16 of women’s welterweight. Borgohain will face Nien-Chin Chen of Chinese Taipei in the quarterfinal on July 30.

She is one match away from winning a medal. 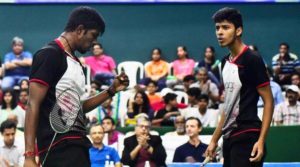 Unfortunately, even after tying with Chinese Taipei on points in the group, the duo has to depart from the games. This meant an unlucky exit for the duo. And won’t make it to the quarterfinals due to the latter’s better game average.

This is the best result for India in men’s badminton in the Olympics.

India started off with an impressive start in the mixed team 10m air pistol qualification. The duo of Manu Bhaker and Saurabh Chaudhary finished 1st in stage 1. Although the duo finished 7th in stage 2 and missed out on the medal events.

On the other hand in the mixed team, 10m air rifle, Divyansh Panwar/Elavenil Valarivan, and Anjum Moudgil/Deepak Kumar finished 12th and 18th respectively. They failed to make it to the rifle final.

In the men’s singles Round 3, Indian veteran paddler Sharath Kamal Achanta bowed out to world no 1 Ma Long of China after a resilient fight.

4 Indians competed in 3 different events in sailing. In the women’s laser radial, Nethra Kumanan finished 32nd in Race 5. And ended the day finishing 33rd in Race 6.

In the men’s Laser, Vishnu Sarvanan started off finishing 26th and 25th in Race 4 and 5 respectively. In Race 6, Sarvanan finished 12th, his best-ever finish so far. And moved to 22nd overall in the standings.

Race 7 and 8 are scheduled for tomorrow.

In the 19 fleet 49er class, the debutant duo of Varun Thakkar and Ganapathy Chengappa opened Race 1 with an impressive start running 6th before finishing 18th.  Race 2 and 3 have been postponed.

Aditya Mishra
Aditya Mishra is currently working as a head of content and manager at KreedOn. He is an ardent defense enthusiast and was a SSB aspirant (SERVICE- SELECTION-BOARD) during his college days. Moreover he has represented his state of C.G in All India Senior National Athletics Championship (Lucknow) and winner of several state athletics tournament (400m). Aditya did his PG Diploma from the prestigious Indian Institute of Mass Communication. With a vision to bring substantial change in India's sporting ecosystem, he along with his team are working for the development of Indian athletes.
Previous article
Complete list of Indian Flag bearers at Olympics: 1920 – 2020
Next article
A glorious history of India at Paralympics