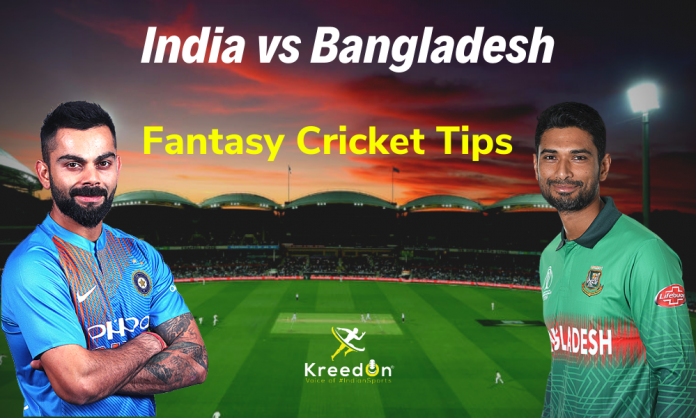 Amidst high pollution levels in the national capital of India, Bangladesh will play their first T20 against India on the 3rd of November, 2019 at the iconic Arun Jaitley stadium previously known as Feroz Shah Kotla stadium

Virat Kohli has been rested for this particular T20 series resulting in Rohit Sharma leading the side.  As for Bangladesh, the recent developments have been crippling. With Shakib-al-Hassan being banned for 2 years by ICC and dependable opening batsman Tamim Iqbal opting out of the series, Bangladesh squad has lesser senior players around on whom they can depend upon.

With a dominating test series performance, Rohit Sharma looks all set to change his gears into the T20 mode. With regular captain Virat unavailable for no. 3 spot, the team might look at KL Rahul or Shreyas Iyer to fill the place. Sanju Samson comes into the team after scoring a double hundred in the Vijay Hazare match against Goa earlier in October. Samson smashed 212 from 129 balls. An inning which included 20 fours and 10 sixes.

Shivam Dube had an incredible series against South Africa A. Dube is all set to play Pandya’s role as the explosive, down-the-order batsman. The 26-year-old smashed a nit out 79 from 60 balls to take India A to a score of 327. He kept the momentum throughout the series with a 28 ball 45 and 17 balls 31 in the third and fourth ODIs.

Washington Sundar might cut into the playing XI as an all-rounder. Yuzvendra Chahal may be preferred over Rahul Chahar in the spin department.

Team India will step out with an intent and a greater purpose keeping the upcoming T20 World Cup in mind.

The team appears to be in a complete disarray with Shakib being banned for 2 years for failing to report “an approach to fix the game”. To add salt over the wound, senior player and one of the most consistent Bangladesh batsman against India, Tamim Iqbal has also opted out of the series.

Mahmudullah will be leading the side against India against India. He along with Mushfiqur Rahim happens to be the only players with a plethora of experience. Mustafizur lately hasn’t been getting wickets consistently. The onus will be on Rahim and Mahmudullah to guide the Bangladesh side to the win.

Mushfiqur has been one of the most consistent players in world cricket, someone who has carried the burden for many years. Rohit Sharma’s captaincy in the 2018 Nidahas Trophy (a T20 series) was par excellence, leading from the front.

KL Rahul will bat with an intent of cementing his place in the squad, and one can expect a good knock from him.

Shreyas Iyer has been impressive with the bat in the recent India-West Indies series. Washington Sundar provides a perfect balance to the side as an all-rounder.

Deepak Chahar had an impressive debut against the Windies recently. He can swing bowls in both the ways.

Chahal may get a chance ahead of Rahul Chahar. Musatfizur Rahman and Al-Amin Hossain have a good track record and have consistently picked wickets at international level.

Toss: England won the toss and elected to field first

With Rohit Sharma in sublime form and added to it the responsibility of captaincy, Team India are clear favourites against a moral shock stricken Bangladesh due to the recent happenings. But the Tigers have the habit of coming down hard on the opponents and this makes it a mouth-watering contest.

KreedOn Network
We are a team of sports writers who research about sports in India day in day out. Please reach out to us in case of any specific requirement of digital services on [email protected] .
Previous articleBengaluru FC vs Jamshedpur FC Dream11 Prediction: Fantasy tips, Head to Head
Next articleEVE vs TOT EPL Dream11 Prediction | Everton vs Tottenham Hotspurs