Age is Just a number: The Incredible Story of Parag Patil 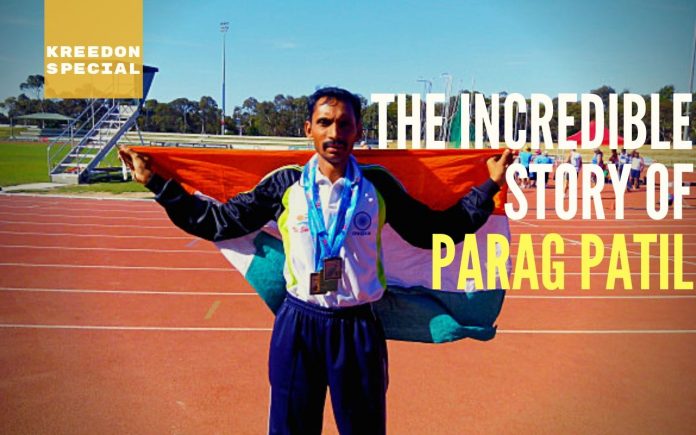 There is a common saying often associated with several veteran athletes –

‘There is no age bar for dreams’. Age is, in fact, nothing but an insignificant number.

Complimenting the quote, today I am going to tell you about an athlete who started his international career at the age of 30 after years of hard work and struggle.

This is the tale of a 40-year old, Parag Patil, who bagged 12 medals for India. And, each of those medals had its own struggle. 22 years of training, patience and balancing his passion for sports with the job.

When it comes to inspirational stories, it doesn’t get better than Parag Patil’s life story (Are you reading this Akshay Kumar?)

We, at KreedOn, had an opportunity to talk with Parag Patil and the athlete opened up about his struggle throughout the years:

“It all started when I was around nine years old, I guess. This was 1988, and I was in school, which was about a km and half from the main road. Now there was just one bus from my school to my home through that bus stop. My school used to bail at 5:30 PM and this bus used to depart at 5:35 PM. Being from a humble background, this was my only option. So as soon as I hear the last bell, I’ would pack up my stuff and be out in a flash. I used to run so hard to catch that bus. It was literally a km sprint. I had just 5 minutes to cover the distance. At times I used to even run behind the bus to the next stop. This is how I began running.” –

Didn’t we tell you it’s one hell of a life story! And we’re only getting started.

Running for the bus just to get home slowly turned into proper running training. And of all the people, Parag’s history teacher, Mahajan Sir, motivated and helped the youngster in preparation.

Parag started his unorthodox training by running behind his history teacher’s TVS 50 moped. And after days of practice, the young Parag began running alongside the vehicle. Mahajan sir played a massive role in Parag’s initial development. He then introduced Parag to a PT teacher for more technical training instead.

Never Stop at Anything

But for Parag, it was just a start. There was still a mountain to climb for the youngster. But unfortunately, he got the bitter taste of dirty Indian politics at the very beginning of his career. “During registration, they fooled me that I’ve been registered for the event using a carbon copy of the form. I felt it like a conspiracy to get me tired. I had to run back to school just before the event and enroll all over again. Anyway, this helped boost my confidence that the guys who trained at the organizing club are scared of my competition although they haven’t watched me running even once in an event.”

Parag had to practice without any infrastructure or boots. Running barefoot, Parag suffered injuries from nails and broken glasses many times in early days. But his teacher never allowed him to stop for any reason.  And, the pupil followed that lesson throughout his career – Never stop at anything!

Despite his training and exceptional performances, Parag could not afford to dedicate his life to sports due to financial issues and family pressure. And just at the age of 18, he took a job as a coach himself. He was also studying BSC (Chemistry) from the Pune University at the same time. Although there was no sports culture in his college, Parag made the most of the limited opportunities. Here is one such incidence:

“I remember in the intercollege athletics meet that year; we were four guys who participated from our college. Just 4 of us participated in all the events we practically could. Long jump, triple jump, 4*100 relay, 4*400 relay and many others. Before coming to the event, I assured our principal that we would go for the overall championship, and with that determination, we actually ended up runners up. Just 4 of us and we gathered so many points that we ended up runners up at the end of the meet. I won the best player of the year for four consecutive years.”

Parag soon finished his Masters in Science, where he got a few more years of college sports. But eventually, he had to drop everything to provide for his family. He got a job at an engineering workshop.


Most of the people would have forgotten about sports after getting a job. But again, Parag Patil isn’t like most of the people. He was determined to make a name for himself in games.

“I remained a working-class athlete for the next 12-13 years and have won numerous awards and medals in the period as well. I used to get up at 5 in the morning to train hard and then work in the office till 5 in the evening, again travel back to the ground and train harder. After that, come back home, have dinner and go to bed. This was my routine for more than a decade.” – Determination!

After 22 years of hard work, Parag got the opportunity to represent India in 2013, at the age of 30. He was a part of the International veteran’s Athletics Championship and grabbed three silver medals in his first appearance at the biggest stage. His hard work had finally paid off. “To wear the Indian tracksuit is the biggest dream of every Indian athlete. It took me 22 years to reach there.”

After proving his worth in his first international competition, Parag got several opportunities. But the biggest problem was – Funds! Not a lot of people came ahead in support of the athlete and offered to sponsor him. For the Senior Olympics in Italy, Parag had to take a loan at the interest rate of 17% per month.

He somehow managed to take care of his travel and stay but was left without a penny in his pocket during his time in Italy. With just breakfast, milk and water every day, Parag went on to win one silver and two bronze medals – Stop at Nothing!

But the athlete was disappointed by absolutely no coverage by media. And even the medals came at some cost for Parag. “I did not get any support or reward for my achievements after returning to India. All my earnings were spent in the interest and loan repayment for the next few months. All I ate was tea, biscuit and cream roll thrice a day for that period. Also, I encountered a bike accident in this phase. I broke my right knee and did not walk for the next six months. Somehow I survived the phase. I did not undergo any surgery for my knee because I could never afford it. Resorted to rest and physio for a long period.”

After the recovery, Parag came back ever stronger. The athlete participated in the 2015 Australian Master Games and won four more medals, 2 gold, and 2 silver. For his next event in New Zealand in 2017, Parag got some financial help from one of his friends, Mr Makrant. But like the rest of the script of his life, this event was also filled with obstacles for the athlete. Parag injured his knee during the long jump event and was not allowed to participate in the rest of the events on that day. He couldn’t even walk back to his friend’s house. But Parag tried to recover as much as possible that night and sneaked past the doctors to participate in the Triple Jump event the next day. And with the injury, Parag won the silver medal in Triple Jump – Again, against all the odds!

The Big Dream of Parag Patil


Parag has a very simple motto in life – “This is not a single race to win or lose. I have many more to come.” Recently, the athlete missed two competitions due to lack of funds. But he wants to make up for it in the upcoming Australian Master Games. The age has failed to stop him; the adversities and financial problems have been unable to stop him. So there is no reason why the 40-year old cannot complete his ultimate dream –

“My only aspiration in life is to win 100 medals for India. I am 88 short of 100 and still believe that I can achieve my goal. All I need is some support from my countrymen.”

piyush
I love sports, mostly playing than watching. And, I work with a great team of KreedOn who is passionate about crafting the future of Indian professional athletes. That's pretty much it.
Previous articleList of Top 10 Best Football Stadium in India
Next articleDream11 PAT vs MUM Pro Kabaddi League 2019 | PKL Prediction