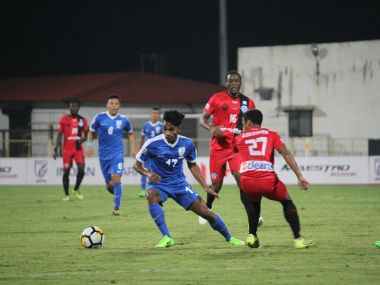 Indian Arrows by displaying comprehensive performance defeated hosts Shillong Lajong 3-0 in the 12th round I-League match at the Jawaharlal Nehru Stadium in Shillong on Sunday.

Indian Arrows starred game on an attacking note from the very first minute and they pressed hard. They constantly troubled the Shillong Lajong defence but were just short of converting it into the goal in the first few minutes.

It took Shillong Lajong almost 10 minutes to regroup and start an attack on the Indian Arrows. Shillong Lajong first tried to score in the 11th minute but failed to convert the opportunity into a goal. While Indian Arrows kept pressing hard and scored the first goal in the 18th minute when Vikram Pratap’s header from an Ashish Rai cross found the back of the net.

Thereafter, Shillong Lajong made a few attempts to score the equalizer but they were not able to cross the strong defence of the Indian Arrows. Indian Arrows continued their attacks and extended their lead in the 32nd minute when a Vikram Pratap pass was collected by Lalengmawia, who converted it into the goal.

Shillong Lajong tried making attempts, but Prabhsukhan Gill made no mistake and maintained the 2-0 lead. The Indian Arrows displayed their brilliance when they fired the third goal in the last seconds of injury time of the first half when Ninthoi converted the opportunity into a goal. The first half came ended with the hosts Shillong Lajong FC trailing Indian Arrows by three goals.

The second half started with Shillong Lajong introducing Phrangki Buam into the attack. This resulted in more attacks from the home team but the Indian Arrows defended solidly.

Indian Arrows maintained their dominance throughout the match as defensive errors of Shillong Lajong cost them three goals.

Shillong Lajong has 4 points in the season and is now 6 points away from tenth-placed Aizawl. With 13 points, Indian Arrows are on 8th place in the table.

Sharad Chitalkar
An E & TC Engineer by degree from PCCOE Pune, a Writer by choice and a Generalist beyond archetype. Curious, Lyrical, Musical, Reflective and Sportive. Likes reading, writing, playing chess, watching sports channels and listening to music. Keen to be always aware of world current affairs. Inspired by contribution spirit and guided by knowledge. Happy and Grateful to be part of sportive KreedOn team where everyone is united and committed to improving Indian Sports Ecosystem.
Previous article
Maharashtra Continues Their Lead in the Medal Tally: Khelo India 2019
Next article
Gautam Gambhir Biography: The Mr. Dependable Who Led Many Victories for Indian Cricket Team

PV Sindhu To Be Rewarded Rs.10 lakh by Badminton Association of...