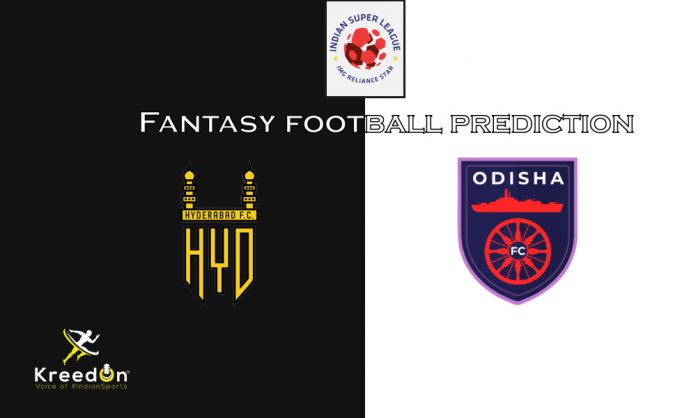 The 57th match of the Indian Super League will see Hyderabad FC welcome Odisha FC at the GM C Balayogi Athletic Stadium, Hyderabad. It will be a huge match for the hosts considering it’s their first game under manager Alber Roca. Odisha FC, on the other hand, are on a 3 match unbeaten streak and would be looking to maintain the momentum. The newly formed team had won the reverse fixture 3-2 back in December.

It will be interesting to see how Albert Roca will field his first team. He has plenty of options at his disposal, and there are a few talented players in the team. If they can stick to their new manager’s game-plan, then they can cause Odisha FC a shock and get their second-ever ISL win.

Odisha FC have lost only one in the last 5 games. They have a squad that is playing well together as well as individually. Odisha will not be allowed to have much of the possession in this game. They will have to find chances to secure the victory and then extend that unbeaten run.

Francisco has made 6 appearances for Odisha this season and has conceded only 5 goals while keeping 3 clean sheets. The Spanish keeper is likely to come out on top tonight and could make some fine saves.

The Wingback duo of Narayan and Shubham have contributed in 47 crosses and 9 shots on goal. Both the players also have registered 140 clearances, 47 interceptions and 97 tackles in total. They will be expected to put a busy shift in defence and at the same time deliver balls into the box.

Matthew Kilgallon is one of the bright spots of Hyderabad’s defensive set up. He will play a major role to keep the Odisha attack silent for most of the match and which is why you should pick him in your defensive side.

The 3 midfielders from Odisha have made a total of 9 goal contributions so far in the season. They are also creating chances for Aridane Santana, who is having a great season in front of the goal as well. Adil Khan is a solid defensive player for Hyderabad and Marcelo Pereria who has scored 3 goals and two assists.

Both the no.9’s of Hyderabad and Odisha are in fine goalscoring form. Aridane has a total of 9 goal contributions, and Bobo has scored five goals in the league so far. The two will battle it out to be the first goalscorer on the night in Hyderabad.

Warad Bhat
Warad is passionate about brands, football, films and food. He enjoys reading about latest gadgets and technologies and spends his time either watching movies or cooking something new. Warad is a spiritual person who believes that to change the world you must change yourself from within.
Previous article2019 ICC Awards: Indians dominate as Englishman takes top prize
Next articleEsports Federation of India signs Mou with Connectin Esports for Esports India Business Conference