How to get perfect abs? Virat Kohli shows the technique [Video Inside] 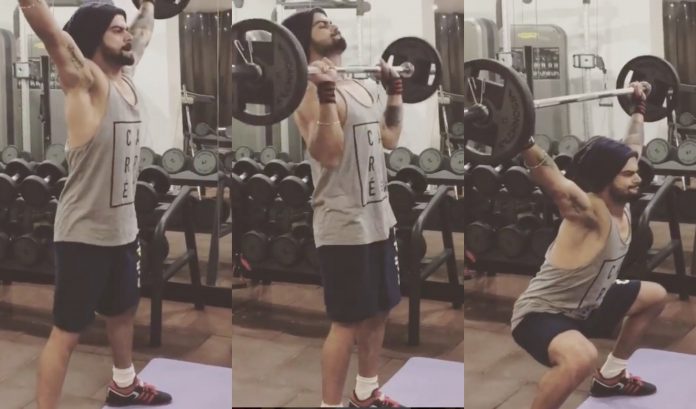 The Indian Cricket Team is in the tremendous form currently playing in the ICC Test Cricket Championships. They recently defeated Bangladesh by an innings and 130 runs and have taken the lead in the two-match test series against the neighbours.

India’s success recently has been due to utter dedication and hard-work that every player is putting in. Driving the passion within the team is skipper Virat Kohli who is also in the form of his life.

Converting to veganism and a strict work-out routine are certainly the secrets behind Virat’s success. The skipper has now shared a video of him doing an ab exercise that is going viral for the right reasons.

The cricketer can be seen doing hanging crunches from a bar in the video. Kohli didn’t get to do much batting wise in the innings against Bangladesh as he was bowled for 0 facing the 2nd ball.

Before the series against Bangladesh, Kohli scored a massive 254* in the 2nd test match against South Africa. Overall in his career, he has scored 7066 test runs and has no intentions of slowing down.

Under his test captaincy India has played 6 matches so far, and currently, dominate the table having registered 300 points in total. Following India in the 2nd place is New Zealand, who are currently on 60 points having played just 2 matches.

Warad Bhat
Warad is passionate about brands, football, films and food. He enjoys reading about latest gadgets and technologies and spends his time either watching movies or cooking something new. Warad is a spiritual person who believes that to change the world you must change yourself from within.
Previous articleOman vs India 2022 WC Qualifiers preview: Must-win situation for India
Next article“It was a clear offside!” Twitter reacts as Blue Tigers fail to roar in Oman