It was one of the most common questions in the GK test during school times – Which is the National Sport of India? We used to write ‘Hockey’ as the answer believing there is no one smarter than us in the class and making fun of those who answered it ‘Cricket’!

So what’s with all the confusion? Were we misled into believing something that wasn’t true? Well, let’s find out:

Since when is Hockey NOT the National Sport of India?

Back in 2012, a curious Lucknow-based kid named Aishwarya filed a Right to Information (RTI) application to the Prime Minister’s Office for the official copies of the declaration of the National Anthem, sports, song, bird, etc. (And look at today’s kids, sigh!)

Anyway, Aishwarya’s request was sent to the Home Ministry who forwarded the sports-related query to the Ministry of Youth Affairs and Sports. And to the entire nation’s surprise, the then Secretary of Sports Ministry, Shiv Pratap Singh Tomar wrote back to Aishwarya saying the Ministry has not declared any particular game as the ‘National Sport of India’. (My whole childhood was a lie!)

You can thoroughly check out the Government of India’s two websites, www.india.gov.in and www.knowindia.gov.in and you won’t find a trace of ‘National Sport of India’ amongst the list of National animal, bird, flower, and whatnot.

So in reality, Hockey or any other sport for that matter was never the National Sport of India. And we never found out about it before because no one was as curious as Aishwarya to inquire about it.

That brings us to the very important question – Even though there was no sport officially declared as the Indian National game, why did we assume Hockey was our National sport of India for years? Why not Cricket, Football, Chess, or anything else?

Let’s clear something up! If you are thinking Hockey was called the National Sport of India because it was invented in India, you could not be more wrong! The game of hockey was actually played in various cultures thousands of years ago. The traces were found in Egypt and Ireland years before Indians even picked a hockey stick.

The main reason behind people assuming or even ‘unofficially’ declaring Hockey as an Indian National game because of the Indian National hockey team’s success at the Olympics. India’s first appearance in the Olympics was at the 1900 Games but under British rule. Norman Pritchard, a sprint runner, won two silver medals at the Games but Indians simply don’t consider it as the Indian gold medal as he had to compete with the Union Jack flag on his chest.

The Union Jack or the Tricolour, India’s could not deliver at the Olympics after that. Apart from Khashaba Jadhav’s bronze in wrestling in 1952, India was going through a horrible spell in any other sports. And those were the times when the Indian Cricket Team was nowhere near what it is today. The condition of all the sports in our country was simply miserable – Except Field Hockey!

The Indian Field Hockey team was simply unbeatable for decades. They were the best in the business. Nations like the USA, Great Britain, and Germany, despite being some of the biggest powers in the world, could not defeat India.

India’s Golden Era started in 1928, their very first Field Hockey appearance at the Olympic Games. India won the Gold Medal, defeating the hosts Netherlands 3-0 in the final. A certain Major Dhyan Chand scored 14 goals in the tournament, including a hat-trick in the final. That was British India’s first gold medal in Hockey.

And that streak continued for the next two Olympics. India won the gold medal in 1932 as well, defeating Japan 11-1 and the hosts USA 24-1! TWENTY-FOUR! India defeated Hitler’s Germany 8-1 in the 1936 Games in Berlin to complete the hat-trick of gold medals.

The Magician, Major Dhyan Chand was one of the biggest reasons behind India’s pre-independence success. The center-forward was simply unstoppable on the field so much so that even the great Adolf Hitler was impressed with his skills.

The British were under the impression that the Indian hockey team won’t be the same after the independence and the partition of Pakistan. But India, proudly representing the Tricolour for the first time at the 1948 Olympics proved them wrong in their own backyard. Independent India defeated Great Britain 4-0 at the famous Wembley to win the gold in 1948.

The dominance continued with the gold medal in 1952, defeating the Netherlands 6-1, and in 1956, defeating Pakistan 1-0 in the final. India had now won six consecutive gold medals at the Olympics.

And this five-decade dominance was the reason why we believed Hockey was the National Sport of India.

After their Gold at the 1980 Olympics in Moscow, Indian has not even made it to the semi-finals in the last 40 years. The Indian team did not even qualify for the 2008 Olympics and finished at the bottom in 2012.

The growth of Cricket and people’s disinterest in Hockey was the biggest reason behind the fall of once the greatest sport in India. The fanfare, prize money, brand endorsements everything started flowing in Cricket’s direction, making it easier for the younger generation to choose the sport of their interest.

The Government and the Hockey federation’s casual approach did not help the cause either. Unlike Cricket, a proper domestic structure was never created for Hockey. Indians were used to playing on the grass, which made things difficult for them after the introduction of AstroTurf at the 1976 Olympics. It took Indian players years to adjust to the new artificial field and the governing body also seemed reluctant to spend money in building these turfs.

READ |Hockey Basics: All You Need to Know About This Sport

Why Not other Sports?

As mentioned earlier, India was nowhere near the top in any other sports. Chess despite being invented by India, was being ruled by the Soviet Union (Russia). In fact, before Viswanathan Anand, India hardly had any player representing the nation at the highest level.

Kabbadi is yet another sport based in India but due to the lack of popularity, the game has failed to make a mark amongst the masses, despite winning three consecutive World Cups.

The games like Wrestling and Badminton also have a history in India but the nation’s failure to produce results at the highest level has not helped their case. Khashaba Jadhav won the bronze at the 1952 Olympics before India went on a dry spell until 2008.

READ|Sushil Kumar: The Rise and Fall of an Indian Wrestling Champion – KreedOn

Sushil Kumar won the bronze at the 2008 Olympics and followed it with a silver at the 2012 Games. Yogeshwar Dutt also bagged the bronze in London and Sakshi Malik became the first Indian woman wrestler to the medal in 2016. The tally has now gone up to 5 medals in Wrestling, but in case of popularity, the game is way down in the list.

In Badminton, India did not find success at all before Saina Nehwal. The shuttler won the bronze at the London Olympics in 2012 and P.V. Sindhu won the silver at the 2016 Olympics. But given the dominance of China, there is still a long way to go for India. 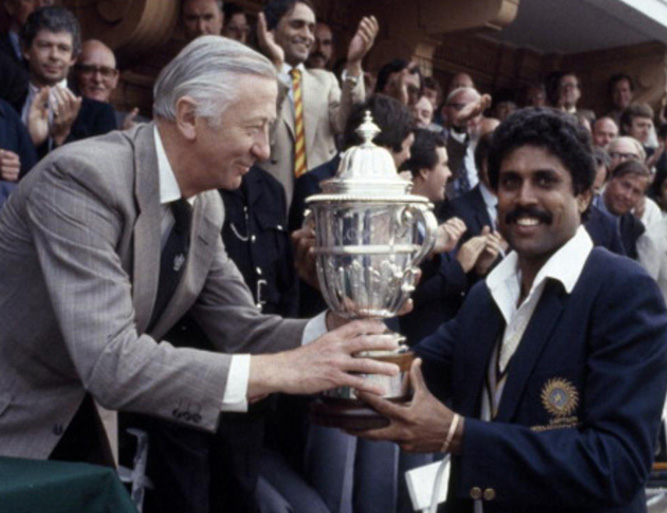 The only sport which could make a case for itself for the National Sport of India is Cricket. But that is in the 21st century when Indians are not the Hockey giants they once were and Cricket has left every other sport way behind in popularity.

But that wasn’t always the case.

READ | Indian Cricket Team: The Rise of Cricket In India. Past to Present-KreedOn

India’s next series win came against New Zealand in 1956, winning the five-match series 2-0. But that hardly cemented the legacy of Indian Cricket and didn’t attract many fans either. Sunil Gavaskar helped India build a good test team in the 70s and found success overseas. All that while Hockey was winning medals for fun!

The real craze for Cricket started after India’s shocking World Cup triumph in 1983 when they defeated two-time World Champions West Indies in the final. Then with the likes of Kapil Dev, Ravi Shastri, and Krish Srikkanth in the 1980s and Mohammed Azharuddin and especially Sachin Tendulkar, cricket became a religion in India. Tendulkar changed the whole dynamics of sports in India, making people not only fall in love with cricket but also go crazy for it.

India won the 2007 T20 World Cup and the 2011 World Cup under MS Dhoni’s captainship and with the introduction of the IPL, it left no room for competition for any other sports in the country.

So what is the National Sport of India?

As mentioned earlier, there is no official National Sport of India. But the debate for the ‘unofficial’ National Sport continues between Hockey and Cricket. Indian Cricket, no matter how popular, will find it very difficult to match India’s 5-decade dominance in Hockey.

But at the same time, Hockey was never this popular even at its peak. The game did wonders in making Indians smile during the Independence struggle though. It gave them the satisfaction of defeating Great Britain in their own background, the country which ruled India for more than 200 years.

There will never be an end to this debate until the Sports Ministry of India comes up with yet another update. And even after that, we are not sure if the decision will please everyone!

Chinmay Pagar
I might be a Mechanical Engineer on the paper, but I was a Sports enthusiast since childhood, screaming at the TV watching cricket at the age of 4. Not much excites me other than sports unless it's free pizza. I can watch literally anything remotely related to sports; Cricket, Football, Tennis, F1, Hockey, Athletics, Chess, you name it! And I love to write too, so at the time I'm not watching sports, I'm writing about it. Or eating pizzas, of course.
Previous article
IND vs AFG Dream11 Prediction | Fantasy Cricket Tips
Next article
Best cricket captains in the world cup of all time

Top 10 Cricket Umpire salary | Facts that will surprise you...

Top 8 uncapped players to look out for in upcoming IPL...