Hima Das is an Indian sprinter who hails from Assam. In a country that has a drought of sprinters, Das is like a refreshing drizzle. The 21-year-old is the first and the only Indian athlete to ever win a gold medal in a track event at the IAAF World U20 Championships. Das is also the holder of the current Indian national record in 400 meters with a timing of 50.79 seconds that she clocked at the 2018 Jakarta Asian Games, Indonesia. Earlier in 2019, Hima set a new milestone by winning 5 consecutive international gold medals in just 20 days.

Hima Das was born in a poor family near Kandhulimari village in Assam’s Nagaon district on 9 January. Her parents, Ronjit and Jonali Das belong to the indigenous Kaibarta community. Both of them do farming to support the family.

She did her alma mater at the Dhing Public High School. There Das was interested in playing football, a sport she would play with the boys. Although she wished to continue playing football, Hima was advised to change her preference to sprinting.

It was Shamshul Sheikh, a teacher at the Jawahar Navodaya Vidyalaya, who gave the most valuable piece of information to the youngster after watching her incredible speed while playing football. What followed is history.

Hima’s achievement is even more remarkable if we consider that she started using spikes only a couple of years ago. The eldest of the six siblings, Hima’s superior talent first came to light at an inter-district meet back in 2016.

Due to the unavailability of a professional running track, she had to practice on a muddy football field.

However, in spite of the lack of training facilities and equipment available, the resilient sprinter scalped a bronze medal in the state meet. Later that year, she reached the 100m final at the junior nationals.

Eventually, Das qualified for the women’s 200m event at the Asian Youth Championships, Bangkok. She went on to finish seventh in the tournament.

However, her time of 24.52 seconds was luckily enough to qualify for the World Youth Championships to be held in Nairobi. There, Das eventually finished at the fifth spot with an overall time of 24.31 seconds.

After the initial development, Hima Das built on that success to compete well in the 2018 Commonwealth Games at Gold coast, Australia in April 2018.

She was competing in the 400 meters as well as the 4×400 meters relay. In the former, Das reached the final. However, she had to suffice herself with a sixth-place finish that came in a time of 51.32 seconds.

Her timing was just 1.17 seconds more than Botswana’s gold medalist Amantle Montsho. The 4×400 meters relay was also disappointing since the Indian team could only finish seventh in the final. They had a timing of 3 minutes and 33.61 seconds.

Then on 12 July 2018, Das tasted her first-ever win. Her maiden accomplishment came in the 400 m final at the World U-20 Championships 2018 held at Tampere in Finland. She had clocked 51.46 seconds to reach the summit. 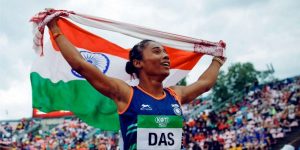 Moreover, she had become the first Indian sprinter to ever win a gold medal at an international track event. In the race, her run was slower in the first half. However, she timely accelerated in the last 100-meter stretch. Das won the competition in dramatic fashion, overtaking as many as three competitors to get the top honors.

This was a fitting compensation for Hima, who had failed to qualify for the final of the 200 meters race earlier on the same day. It was a false start in the semifinal that had let her down back then.

Hima also won a silver medal in the 4×400 m mixed relay to complete a record-breaking haul at the continental extravaganza.

It was the first time that such a mixed event was held at the Asian Games.

When she returned back home in September, a surprise was waiting for her. As if a reward for her massive success in Jakarta, sportswear company Adidas India signed Hima Das for an endorsement deal. The company, in a statement, said that the athlete would be equipped with the best products that Adidas has to offer for Das’ racing and athletic needs. Moreover, she was presented with a custom-made shoe.

Aged only 18, Hima Das was conferred with the Arjuna Award by President, Shri Ram Nath Kovind in 2018 for excellence in Athletics, in a glittering ceremony, at Rashtrapati Bhavan, New Delhi on September 25, 2018.

The Government of Assam further appointed her as the state’s brand ambassador for sports. And in the year 2021, she was appointed as the DSP in Assam Police.

Heartiest Congratulations to @HimaDas8 and all 597 newly selected Sub Inspectors of Assam Police.

Together, we'll write a new saga of people friendly policing in the State, to serve the citizens of Assam.@CMOfficeAssam @DGPAssamPolice#SIsRecruitment pic.twitter.com/KBeFUGHLuW

The year 2019 didn’t start well for Hima Das as her back pain aggravated from bad to worse. It is understood that she suffered discomfort in the back post the Asian triumph. However, mismanagement on the Athletics Federation of India (AFI) officials’ handled to the worsening of the injury.

After spending most of the first half of 2019 on the sidelines, Hima made a winning return on July 2 by winning a gold medal at the Poznan Athletics Grand Prix in Poland. She matched it up with another gold five days later at the Kutno Athletics Meet, also in Poland. The sprinter followed it up with medals three more yellow metals in the span of 20 days, setting a new milestone. Hima matched it up with another top finish at the Athleticky Mitink Reiter event in the Czech Republic in August.

If this doesn’t inspire you …what will ???? 5th Gold in 20 days !!! What a superstar you are #HimaDas – you are truly India’s Pride- Congratulations https://t.co/uTVBfVjAcv

However, the youngster paid the price for a hurried return as well, as her back pain returned back. Das, therefore, had to miss the biggest track and field meet in the world, the Athletics World Championships held between September.

Hima Das was born in a joint family of 17 in the Kandhulimari village near Dhing in Assam to Ranjit and Jonali Das. Her parents belong to the indigenous Kaibarta community. Both of them do farming to support the family.

As Ranjit was a fast runner himself, he saw no reason to deny Hima from pursuing sprinting. He saw “real passion” in Hima, according to him. However, it was Jonali who had certain reservations about her decision to run. This was natural, considering Hima’s profession required her to travel to faraway places, on her own.

On 26th Feb. 2021, the star sprinter, was inducted as Deputy Superintendent of Assam Police. Assam chief minister Sarbananda Sonowal handed her the appointment letter. Top functionaries of the state government as well as from the police department, including the Director-General of police attended the program.

Newly appointed DSP of @assampolice Hima Das conveys her gratitude to Govt of Assam for ensuring a bright and secured future for athletes in the state. Under the leadership of Hon'ble CM Shri @sarbanandsonwal , Assam has undergone immense transformation in the sports arena. pic.twitter.com/vrfcvpFB8d

An inspiration to every indian pic.twitter.com/e2zHKqVCMq

YONO, the new age digital bank from @theofficialsbi recognising young achievers under 20, and I am thrilled  to be nominated for  the #YONOSBI20under20 #award for #youngachievers. Vote for me on this link, www.yonosbi20under20.comand check out  #indias #coolest #under20 #achievers#go-getters Many thanks to #YONOSBI  for making me a part of this.

Thanks my mother father

The dream which you see in sleep, do not dream of those who do not sleep this is big big dream Mon jai

Monish Gadiya
Monish Gadiya is the Head of Content at KreedOn. He is a thorough tech-enthusiast and believes that innovation is the answer to all the problems prevalent in the society. Monish graduated from University of Pune with a degree in Civil Engineering before pursuing a post-graduate diploma course in intellectual property rights. A die-hard football fan, he has represented his college at various football competitions.
Previous article
Jaspal Rana Left Out by NRAI For Training Camp Before ISSF World Cup
Next article
India vs New Zealand Women 2nd T20: India Loses in 100th ODI, NZ Take Away Series

How Indian football is taking baby steps towards global goals

Long Jump Event – Everything You Need To Know About The...

Congratulations to Hima Das for Being Appointed as UNICEF India’s First...